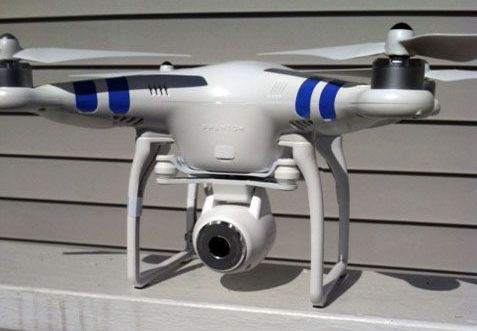 “Please provide the details about the drone that was buzzing around Pops at the Post.”
— Steve Luther

The quadcopter belongs to a local real estate agent, James Poe, who said he prefers “portable photographic platform” to “drone” since the latter often is associated with killing people.
This one takes pictures.
Having had an interest in working with radio control machines for 43 years, Poe said he has had the DJI Phantom 2 Vision for about eight months and it’s the most “complex unit” he has seen or flown.
With a 22-inch span from tip to tip, Poe said the machine weighs three-and-a-half pounds and can lift six pounds.
The quadcopter uses between six and 12 satellites to navigate its course and has a range of about half a mile, Poe said.
The quadcopter can be preprogrammed to fly a determined course and return to the departure point.
In addition to using the machine in his business to take aerial shots of properties, Poe said he uses the quadcopter to take pictures for Christmas cards and other seasonal letters for a fee.
The machine is equipped with a 14-megapixel camera, shoots in 1080p high-definition and has a fail-safe mode where it returns to the initial takeoff spot and lands automatically if the signal is ever lost.
Poe said his quadcopter can stay airborne for 25 minutes.
The price?
It ranges from $2,000 to $3,000 and can be ordered online, Poe said.
With a hotspot for the quadcopter set up in the backseat of his car, Poe said the machine is with him wherever he goes.