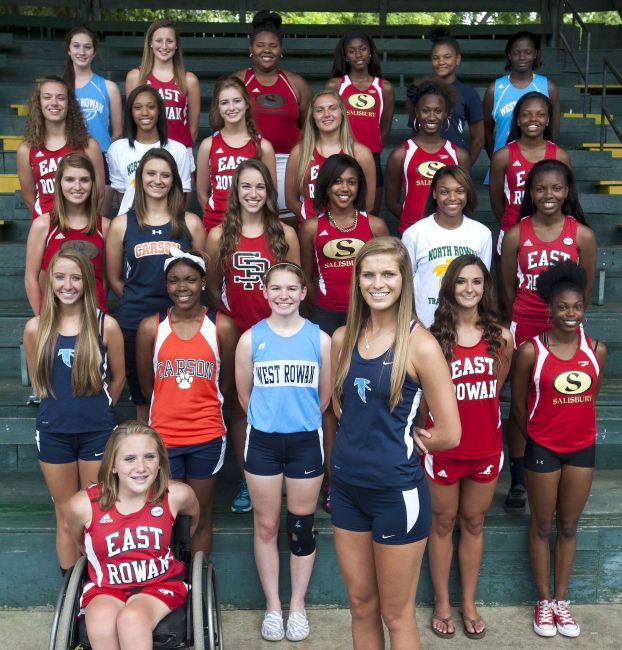 Rebecca Parker wanted to challenge herself heading into her last prep sports season and it paid off.
The West Rowan senior had consistently outperformed everyone in the county in the 1600 and 3200-meter runs for the last three years but she wanted to add another element to her game.
Parker had never run in the 4×800 relay or the 100-meter dash, but gave them a try in the county meet after consulting with a coach. She had already signed with Georgia Southern in the winter, so there was no need to impress anyone. Parker and West went on to win the 4×800 relay along with Emily Goddard, Brieanna Owens and Josie Heglar.
“It was definitely eye-opening to see the difference between sprinters and distance runners,” Parker said. “It was just something I wanted to do. I wanted to PR in every event”
She’s exiting high school hitting her peak. Parker had career best times in the 1600 (5:37), 3200 (12:04) and the third leg of the 4×100 relay (1:12) this spring. Naturally Parker was a good soccer player too, although she focused on track this spring. Parker was part of a 38-game North Piedmont Conference winning streak in soccer and was all-county last year.
“Running definitely changed me,” Parker said. “I went into high school thinking I’d be a soccer player. Now I’m going to college to be a runner.”
Parker was slated to run in the steeplechase at GSU until a coaching change in the program occured. She’ll still run cross country, where she was the Player of the Year in the County the past three seasons. Last year, Parker won the 3200 county race by almost two minutes.
“I’m excited about Georgia Southern,” Parker said. “We’ll probably get down there about a week before classes start and see where I’m at.”
Parker wants to major in diatectics at GSU.
•••
The entire all-county girls team is listed on the scoreboard page.