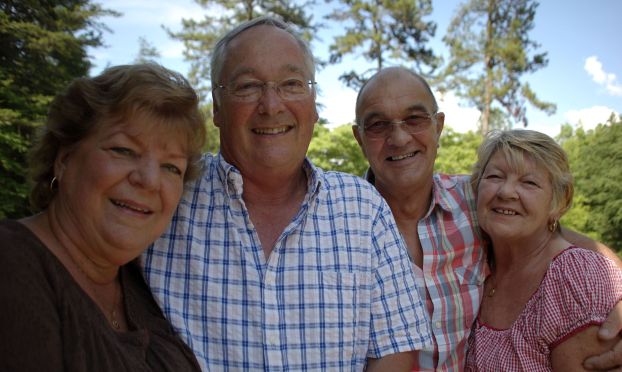 SALISBURY — It all started 57 years ago when Charlie Walker and Frank Yardley began writing letters to each other.

Daisy Walker here in Rowan and Liz Yardley over in England learned they each had younger brothers 11 years old, so they encouraged the boys to be pen pals, too. Charlie wrote Frank first, and the men say those first letters touched on subjects such as the differences in their two countries, motor bikes, cars and girls.

While Daisy and Liz stopped corresponding with each other, Charlie and Frank never quit. The more they traded letters, the more they realized how much alike they were.

As they grew older, married and raised families, their friendship just became stronger. Their wives became fast buddies, too, and it was no coincidence, the couples say, that when the Yardleys named their daughter Deborah, so did the Walkers when their own girl came along about a year later.

Then, when the Yardleys had a son named Michael, well, you know the drill: The Walkers also had a son about a year later and named him Michael.

Back in 1982, as a much younger reporter, I wrote about this across-the-ocean friendship the Walker family of Barringer Road had developed with the Yardleys of Kent, England.

The whole Yardley family was in town then, making their first visit to the United States. The Walker and Yardley kids ranged in age from 17 to 14, and Charlie and Frank, both 36 then, already had been writing to each other for 25 years.

I share this background because Frank Yardley and his wife, Dee, are back in Rowan County this month as part of celebrating their 50th wedding anniversary.

“We haven’t come here this time to rush around everywhere,” Dee Yardley says. “It’s just their company that we love.”

On that 1982 visit, the families crammed in a lot of stuff — Disney World, four days in Myrtle Beach, visits with Walker relatives, shopping in Charlotte and tours of historic Salisbury.

This time — it should be noted the couples have visited with each other several more times since 1982 — the Yardleys have preferred a leisurely approach.

The Walkers have taken them to local places such as the N.C. Transportation Museum and Morgan Ridge Vineyards. Charlie and Frank visited a vintage record store in Kannapolis, where the proprietor couldn’t believe someone would come to his shop all the way from England.

“Are you all right?” he asked Frank.

Otherwise, the Yardleys have just been eating out or having a cookout or two with the Walkers’ relatives, who have come to enjoy the Yardleys as much as Linda and Charlie.

As you can figure out, all the kids are long grown and out of the house these days, given they are in their mid to late 40s. But Debbie Yardley still refers to the Walkers as Uncle Charlie and Auntie Linda.

The Yardleys have seen, of course, Deborah and Michael Walker. Deborah has always preferred to go by “Suzie.” Suzie Walker-Archambo is the optometrist at Salisbury’s Walmart. Michael Walker is a law enforcement officer for Charlotte-Mecklenburg.

There are other signs of the years that have passed, Frank has lost most of his hair, while Charlie’s has turned snow white. The Yardleys have grandchildren and great-grandchildren. The Walkers have four grandchildren.

There’s a constant kidding and ribbing between the couples. Frank brought a jar of marmite with him, knowing it probably wasn’t an extract (made from brewer’s yeast) the Walkers would enjoy.

“It’s not high on my food list,” Charlie acknowledges.

Linda scrunches her nose and says the best way to think of it is as liquefied beef bullion in a jar.

As you can imagine, it’s much easier for Frank and Charlie to communicate these days, given emails, social media and telecommunications in general.

In fact, the couple pretty much just call each other by telephone because it’s so easy. Frank estimates they speak on average about once a week.

Over the years, they’ve also gone on vacation together to Las Vegas and on a Mediterranean cruise in 2001. They hope another cruise is in their future next year.

The first time the couples met each other face-to-face was in 1973, when Charlie and Linda visited the Yardleys in England.

Everybody’s retired now. The Yardleys have not given up their love of music and still have a five-person band called “Dee and Her Heartbeats.” Dee sings, and Frank plays rhythm guitar.

Charlie Walker plays bass guitar, by the way, so he and Frank talk a lot about music.

Pretty soon, the Yardleys plan to fly to California for several days to see Frank’s cousins. They will return to the Walkers June 29, attend the Fourth of July celebration in Faith and leave for home July 6.

There’s a lot of laughing going on at the Walker house this month, and when the couples eat out, the Yardleys are confronting all kinds of American fare, such as Wendy’s, Arby’s, Bojangles and Cracker Barrel.

When they’ve been able to sample less homogenized, more Southern fare, Dee has given a thumbs up to menu items such as fried green tomatoes and collard greens.

Sorry, but the Walkers still give thumbs down to the marmite.