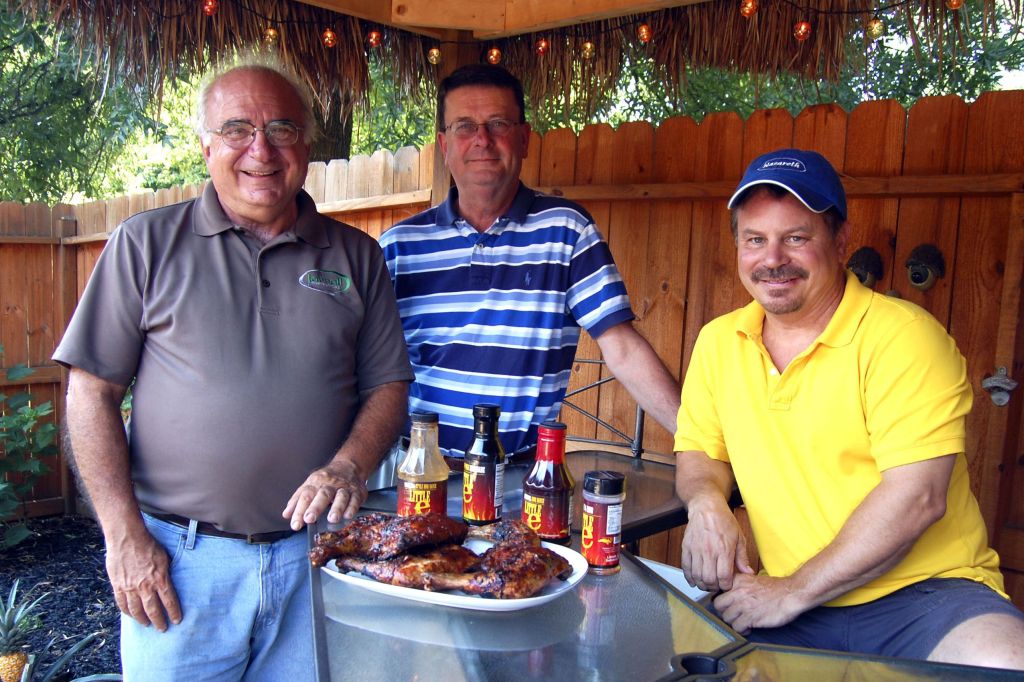 GRANITE QUARRY — Six years ago, guests at a backyard graduation party could not stop raving about the chicken.

Seasoned with a rub concocted by Eli Fisher, the baked chicken surpassed even the grilled meats in flavor.

“We had other foods there too, but once people tasted the chicken with the rub, they couldn’t get enough,” party host Tom Bost said. “People talked about it for months.”

It didn’t take long for Fisher and Bost, along with fellow party guest Archie Jarrell, to sense an opportunity. Before the night was over, they had concocted something else — a plan to go into business together making and selling Fisher’s dry rub, barbecue sauces and marinades.

Now, after years of taste tests, recipe refining, bottling and distributing contracts and a lot of laughs, the three friends-turned-business partners have landed a deal that could help launch their sauces across the region. Little E Sauces and Marinades is now for sale in all Rowan County Food Lion stores.

Available in three flavors — original barbecue, Carolina style barbecue and a beef, pork and venison marinade, all $3.39 — plus a dry rub, the preparations are located in the specialty foods section at Food Lion.

Jarrell, who owns a construction company, and Bost, a real estate agent, said they were impressed that baked chicken could compete with something on the grill. Talk about starting a business started as a casual conversation.

“We were halfway serious, but by the end of the night, there’s 100 people here and not one hasn’t talked about that chicken,” Jarrell said. “That’s hard to ignore.”

Fisher, who caters and ran Jabe’s Deli in Granite Quarry and Smokin’ Guns Bar and Grill at Lake Norman for several years, took the lead. His nickname became the catchy name of the new business.

“I felt like it was possible that we could really have fun with this product and maybe make some money at the same time,” said Fisher, general manager for American Homes of Rockwell.

An inexpensive luxury, barbecue sauce will sell even in a depressed economy, he said. People enjoy cooking and grilling, and they like to impress their friends.

Using Little E products is a nearly foolproof way to make all kinds of food taste better, from chicken and venison to vegetables and eggs, Fisher said. Bost even spreads it on his peanut butter sandwiches.

“It puts a little chef in everyone,” Jarrell said.

Earning a spot on Food Lion shelves took about 18 months of determination. Fisher said he kept calling Food Lion officials, and the breakthrough finally came when he convinced someone at the company to taste the sauces. Suddenly, Food Lion was interested.

The trio say they are grateful for the support of their hometown grocer and decided not to sell their products through the mail so they could focus on stocking Food Lion and a growing number of area convenience stores.

They’re already working on additional products. Next up are western-style beans and a seafood marinade. The rub, sauces and marinade are made with Fisher’s recipes and bottled at Bobbees Bottling near Louisburg and Old South Foods near Wilson.

Little E debuted at Pops at the Post earlier this month and nearly sold out. Marketing includes a Facebook page and sponsoring local events.

The trio did not disclose their start-up cost or initial investment but acknowledged that launching the business was more expensive than they anticipated. Now, they hope Rowan County cooks, chefs and grill masters will respond by trying Little E products and, if they like the taste, spreading the word.

Fisher said his unique mixture of herbs and spices make the preparations different from other brands.

“And it’s easy for people,” he said. “It will make their food taste very good without putting in a whole lot of effort.”