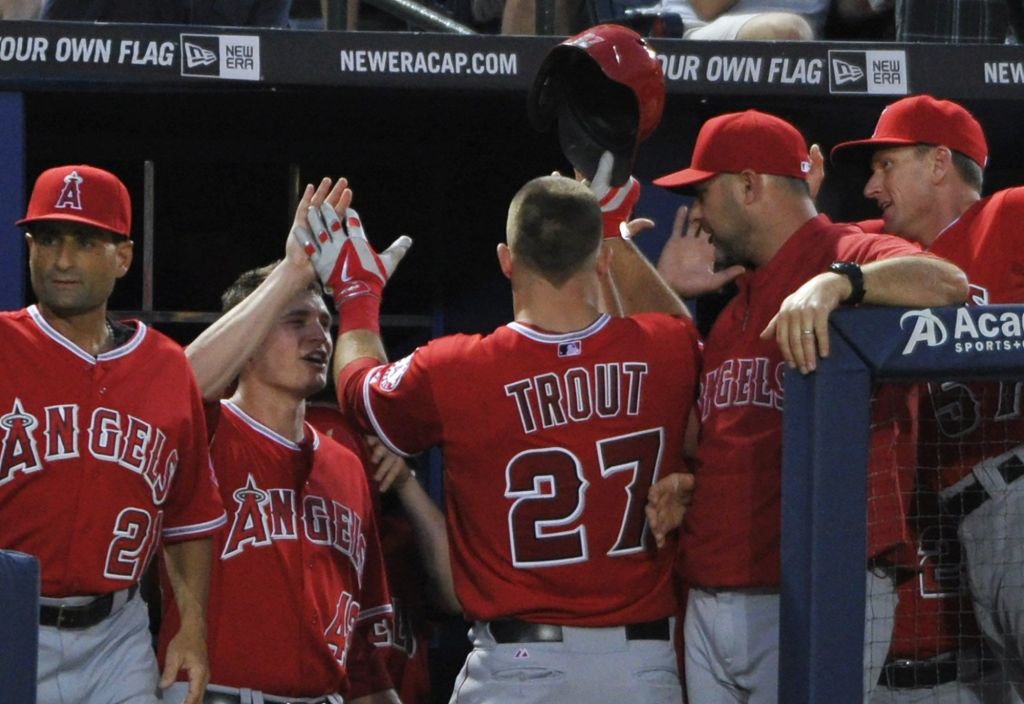 ATLANTA (AP) — Kole Calhoun’s bases-loaded single in the 13th inning drove in the go-ahead run and the Los Angeles Angels recovered after blowing a four-run lead in the ninth to beat the Atlanta Braves 11-6 Saturday night.
Mike Trout and Albert Pujols each had three hits, including back-to-back homers in the sixth inning, and drove in four runs.
Evan Gattis homered for Atlanta.
Erick Aybar led off the 13th with his fourth hit, an infield single, and moved to second on catcher Gerald Laird’s passed ball. David Hale (2-1) walked pinch-hitter C.J. Wilson and hit Chris Iannetta with a pitch to load the bases.
Calhoun’s soft fly ball fell just in front of center fielder B.J. Upton, who attempted a sliding catch, to give Los Angeles the lead. Trout’s two-run double and Pujols’ two-run single pushed the lead to five runs.
The teams combined to use 16 pitchers in a game that lasted almost 5 hours.
Fernando Salas (4-0) pitched two scoreless innings.
Josh Hamilton drove in Pujols with a single off Craig Kimbrel in the 10th inning to give the Angels a 6-5 lead. The Braves pulled even on Jason Heyward’s run-scoring, broken-bat single off Cam Bedrosian.
The Braves trailed 5-1 before scoring four runs in the ninth on five straight hits off Ernesto Frieri, costing Garrett Richards a win after he set a career high with 10 strikeouts in six scoreless innings. B.J. Upton had a two-run triple and Freddie Freeman’s double drove in the tying run.
Angels rookie Cam Bedrosian faced immediate drama in the 10th. Tommy La Stella led off with a single and moved to second when Bedrosian dropped the ball on the mound for a balk. With his father, former Braves pitcher Steve Bedrosian, watching from a luxury suite, the young Bedrosian recorded one out before giving up an infield hit to pinch-hitter Ramiro Pena and Heyward’s tying single to right field.
An intentional walk to Freeman loaded the bases before right fielder Calhoun charged toward the infield to make a diving catch on Justin Upton’s fly ball, ending the inning.
Richards allowed only four hits with three walks. He has allowed a combined 12 hits and one run in three dominant June starts.
Pujols drove in the Angels’ first run off Gavin Floyd with a sacrifice fly in the fourth.
Angels manager Mike Scioscia missed the game to attend the funeral of former Dodgers teammate Bob Welch in Arizona. Bench coach Dino Ebel improved to 3-0 this season as Scioscia’s stand-in. Ebel was the acting manager for two wins when Scioscia was attending his daughter’s college graduation in May.
Aybar ended the Braves’ fourth inning when he dove to his right to stop Andrelton Simmons’ one-hopper. The shortstop threw from his knees to second base for a force play on Tommy La Stella, who reached on a walk.
Floyd allowed four runs on seven hits in 6 1-3 innings.
NOTES: Richards’ previous career high was nine strikeouts in two games this season — May 3 against Texas and June 4 at Houston. … B.J. Upton’s two-base fielding error on Aybar’s single in the eighth set up an unearned run off Jordan Walden. … LHP Alex Wood gave up two hits in 3 2-3 scoreless innings for Triple-A Gwinnett on Friday night. It was Wood’s first appearance since he was sent down to be stretched out as a starter. … Gattis extended his career-best hitting streak to 14 games. … Braves LHP Mike Minor will face Angels LHP Hector Santiago when the three-game series ends on Sunday night. Santiago is 0-6.