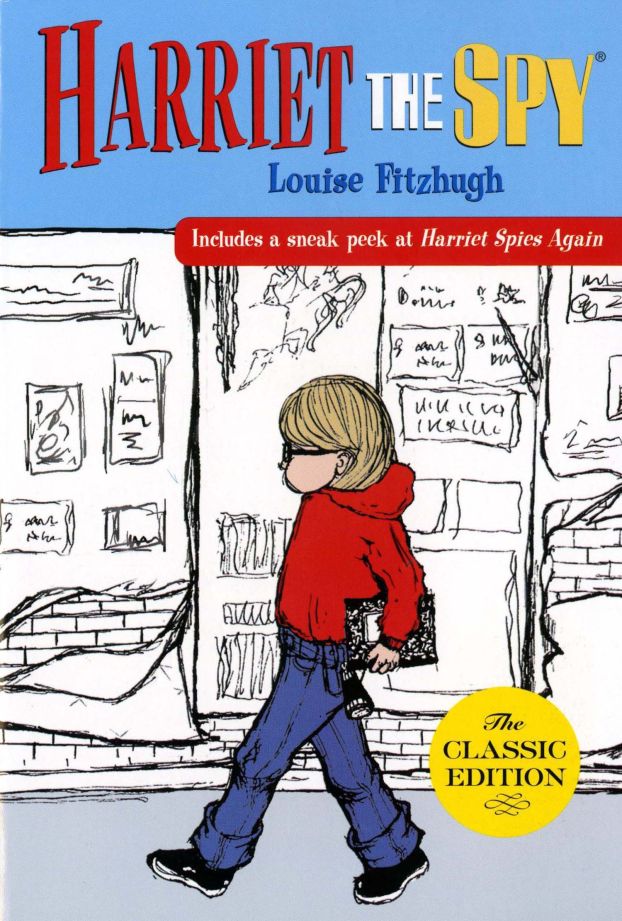 Let’s talk about ‘Harriet the Spy’

SALISBURY — Harriet M. Welsch, what are you up to these days?
At 61, would you still be spying? Would you be the next John le Carre or Robert Ludlum? Perhaps the first female Ian Fleming? Somehow, I imagine you’d be more like P.D. James, who makes social commentary a regular part of her mysteries.
Harriet, after all, is a close observer of life. All the stuff she writes in her secret notebook, things about the boy with the purple socks and the snooty Marion Hawthorne, are true, as far as 11-year-old Harriet is concerned. True, maybe, but a little bit mean-spirited, a little hurtful to those under her attentive eyes.
This year marks 50 years since “Harriet the Spy” was first published, 1964, and loads of people of a certain age read the book as a child and fell in love with it. Maybe it’s Harriet’s independence, which would certainly be dangerous today. Maybe it’s her bravery, looking in windows and eavesdropping on conversations. Maybe the thrill of being the person who knows private things about strangers. Harriet lives a rather privileged life, with a nurse, a cook and a short, eventful walk to school. She doesn’t tell anyone where she’s going or what she’s doing, most of the time.
That must have been appealing to children of the time. How we longed to be left to our own devices and do what we wanted to do. Some of us, more curious than others, would have loved to poke around and find out what the grown-ups were doing — they were such an odd crowd.
“Harriet the Spy” springs from a distant time, when life was not quite so fraught with dangers and don’ts, fear of strangers and violent situations. Even for 1964, when the world was struggling with huge social, political and cultural changes, this book is somewhat nostalgic.
In case you were one of the people reading something else at 10 or 11 — “Encyclopedia Brown” or “The Phantom Tollbooth” — here’s a little bit about Harriet’s story: Her parents pretty much go about their business without too much thought about what Harriet’s doing. Ole Golly is her very wise nurse, who knows everything Harriet is doing, knows about her notebook full of observations and about her spy route. Ole Golly is safe, a sort of Mary Poppins to Harriet, but with fewer rules.
Harriet, who only wants to write, must go on her route every day after school, after her milk and cake. She stops at the Dei Santi’s grocery store to check up on the drama of a big, Italian immigrant family. Franca is pretty, but dumb. Bruno works hard, Fabio hardly works. They have a delivery boy, Little Joe Curry, who eats his weight in stolen food in the back room, what he doesn’t give away to poor families.
She spies on Mrs. Plumber, using the old dumb waiter in her house to watch her as she lies in bed, talking on the phone. Through a skylight, Harriet spies on Harrison Withers, who makes delicate bird cages in one room, while the other room is room full of cats. She writes poignant observations, like “HE LOVES TO DO THAT. IS THIS WHAT OLE GOLLY MEANS? SHE SAYS PEOPLE WHO LOVE THEIR WORK LOVE LIFE. DO SOME PEOPLE HATE LIFE?” Harriet always write in all caps.
She has plans for the future, too, an office with her name on the door, but no price. “I CAN GO THERE EVERY DAY FROM ELEVEN TO FOUR AND WRITE IN MY NOTEBOOK. PEOPLE WILL COME IN AND TELL ME WHO TO GO AND SPY ON AND I CAN DO THAT OUTSIDE OF OFFICE HOURS.”
Her best friends are Sport, who runs his household because his mother is gone and his father is a writer, and Janie, a mad scientist with an evil smile. Janie’s mother is afraid of her, as are most people, because of the nasty looks she flashes at everyone. Sport really is a good sport — he cooks and cleans and keeps a budget. They are all in the sixth grade at a private school.
Harriet also writes about her friends and classmates, unfortunately. Most of her classmates are not her friends, and she especially dislikes Pinky, who does nothing but annoys her anyway. No one is immune to her pointed observations.
Then, one disaster after another strikes. First, she finds out Ole Golly has a boyfriend and she actually meets him. Then, an innocent movie night turns into a huge blowup, then Ole Golly leaves to marry Mr. Waldenstein. All sorts of things begin to go wrong. Harriet has to play an onion in the Christmas pageant. Harriet just doesn’t feel right. She feels mean — and a mean Harriet is indeed a formidable force. When one of her classmates finds her notebook and they all learn what she’s written about them, bad goes to worse pretty quickly.
It looks like it might be the end of Harriet the Spy — they take away her notebook! That’s the final straw and key to Harriet’s new, outrageous behavior.
Will author Louise Fitzhugh leave Harriet like this? Will Ole Golly come back? WHAT IS WRONG WITH HARRIET?
Fear not, gentle readers. The book carries an important message to mothers and fathers about how they treat their children, and to teachers who don’t understand. The message is pretty subtle to a child, but that child might gain some hope from seeing how it all turns out.
Jennifer Hubbard, or Jenny, as readers may know her, will discuss the book, which is part of the Summer Reading Challenge, on Tuesday at 7 p.m. at the Norvell Theatre in downtown Salisbury. The multi-talented Hubbard loves the book and was once a teacher herself. She’ll offer insights into what has become a long-lasting classic. Hubbard is the author of two young adult novels, “Paper Covers Rock” and “And We Stay,” as well as an actress, playwright, poet and director. I wonder if she was a spy?

5 things to do this weekend