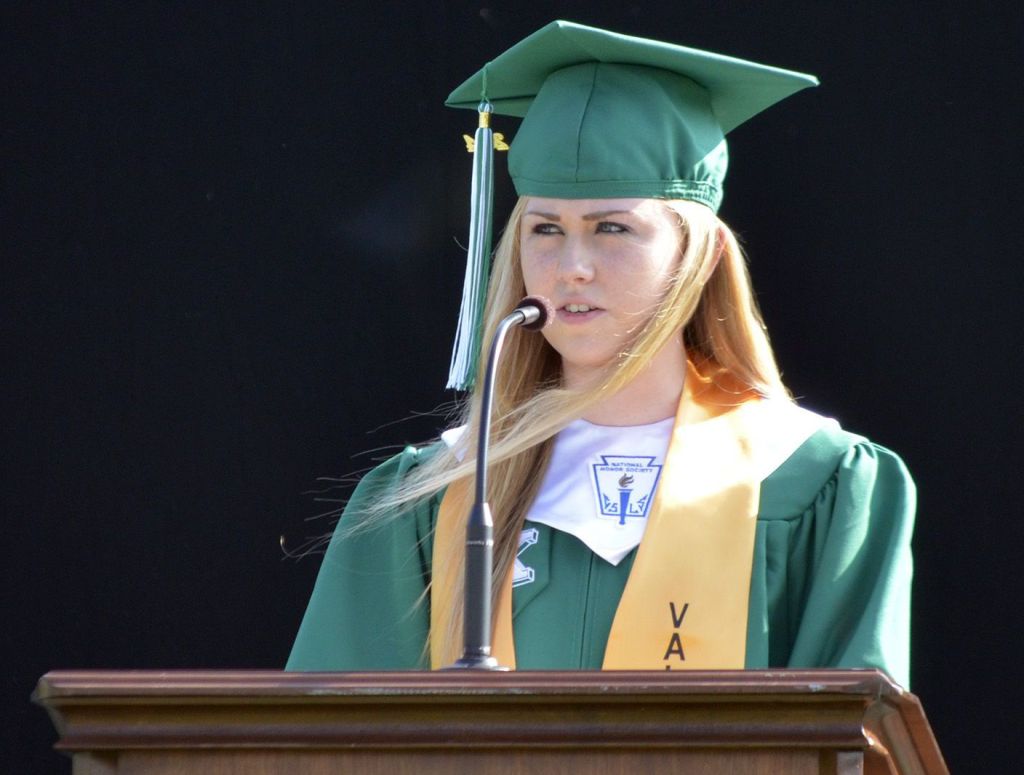 KANNAPOLIS – “In this hour, our lives are about to change,” A.L. Brown High student Aria Lipscomb, senior class president, said as she welcomed parents and families to the 2014 commencement on Saturday.
By the end of the ceremony, Lipscomb and her peers were no longer high school students, but high school graduates.
At its first outdoor graduation ceremony in 16 years, thousands packed into Kannapolis Memorial Stadium to witness 299 young men and women receiving their diplomas from A.L. Brown High School.
Lipscomb asked the audience to listen carefully for the names of the graduates. “When you hear of them again, they’ll be changing this world,” she said.
Principal Kevin Garay complimented this year’s graduates on their creativity, their compassion and their professionalism.
They were the first class of students Garay oversaw as principal of A.L. Brown, and will also be the last class he watches graduate.
According to media reports, Garay is leaving Kannapolis City Schools to take over as principal of Mallard Creek High School in Charlotte.
Garay said he was excited about the destinations life has in store for his students.
“Seniors, you have made a tremendous impact and you are ready to move on,” Garay said.
He also thanked the parents and families who have helped mold those students. “They are the products of your support,” Garay said.
Valedictorian Emily Adele Boone recounted some of the Class of 2014’s accomplishments, including building a house for Habitat for Humanity, donating to local charities and being the first class to make use of a new science, technology, engineering and mathematics facility at the school.
“Together, we have experienced many wonderful firsts,” Boone said. There have also been challenges, and the loss of classmates and friends, she said.
“But our challenges have made us stronger, and show us we must live life to the fullest,” Boone said.
Keynote speaker Coach Bob Trott, a 1972 graduate of A.L. Brown, spoke of his days at a student – running on the same track, and playing football on the same field where the graduates sat.
His world was different from the world this year’s graduates know, Trott said. “I grew up in a mill house my entire life,” Trott said.
Using lessons from his coaching career, Trott – now the defensive coordinator for the University of Richmond football team – reminded students that they are always a part of a team in the world.
“Everything you do, somebody sees. Nobody is invisible,” Trott said.
He challenged the Class of 2014 to stand out. “Make yourself necessary in life,” Trott said. “…Be proactive.”
After all the degrees had been awarded, the stadium filled with cheers, shouts and applause as loud as those at any home football game.
Outside the stadium, graduate Oscar Romero said he was glad for the years he spent at A.L. Brown.
Romero said he moved to Kannapolis in the eighth grade, and met people in high school who became friends.
“I’m really glad I came here,” Romero said. “There’s a lot of good opportunities a lot of schools don’t have.”
Romero said he plans to join the U.S. Navy next year, after taking a year off to work.
“I’ll miss the students, the friends, some of the teachers,” Romero said.
He definitely will not miss the uniforms, Romero said.
For graduate Lyric West, there was a big advantage to the outdoor ceremony: her whole family could be there.
Instead of the limited tickets and overflow seating of years past, West’s mother, Shakoka, and the entire family could pack into the stands.
As a surprise, Lyric’s mom had T-shirts made with Lyric’s picture and a question on the front, “Graduate or Nah?”
All told, 15 people were in the stands to cheer Lyric on.
And the surprise worked, said Lyric West, who’s heading to Rowan-Cabarrus Community College this fall to study business.
Megan Rupert, who’s heading for N.C. State University to study business management this fall, had letters on her mortarboard: “Oh the Places You’ll Go!” – a reference to the Dr. Seuss book of the same name.
Rupert said it’s appropriate for graduation day. “Everyone reads it as a kid,” Rupert said. “Now that we’re grown up, I feel like – ”
“You’re still a kid!” her best friend Brianna Zaino interrupted.
Zaino is heading to Stonybrook University on Long Island in New York, where she’s originally from.
Each said they’d miss the other most. “We’re going to be on totally different sides of the world,” Zaino said.
While Zaino said she wouldn’t miss the “small town” of Kannapolis, all 299 of this year’s graduates will carry a little bit of Kannapolis with them in the memories of their high school years.