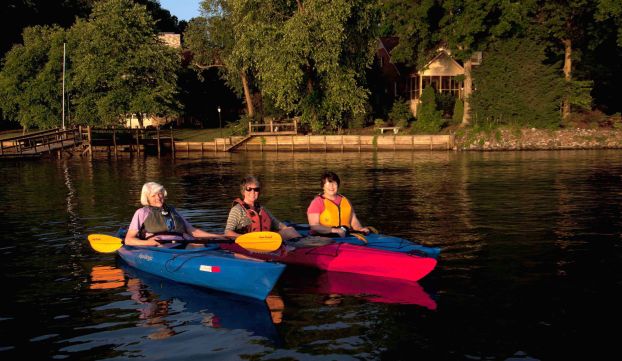 Another golden hour captured by photographer on Crane Creek

Two minutes. That is the average amount of time that it takes for the sun on this part of planet to disappear below the horizon after it first touches it.
I am much like most everyone on the topic of sunsets. If I happen to be facing one when it occurs and it appears extra eye catching, I will give it my full attention.
As a photographer, I hear the phrase, “golden hour,” tossed about frequently. I first heard years ago in photo school at Randolph Community College. Students often chatter on about techniques and processes. One day the topic would turn to the golden hour.
The golden hour occurs just after the sun rises and before it sets. The color of the light from “ol Sol” as it peeks around the corner of the planet is briefly altered as it bounces through the atmosphere. Copious amounts of reds and yellows emanate from the spectrum that no warming filter or Photoshop trick can match. It really is supernatural.
I recently was invited to join a group of women who make daily outings on High Rock Lake in kayaks. The hook of the invitation was watching a sunset over the lake. Carole Simmons, who has lived in Anchor Downs for 34 years, painted a mental masterpiece in beautiful detail of the sun trailing across the surface of the water and then slowly disappearing behind the trees.
Carole and her husband, David, live in a house situated in such away that viewing sunsets is not possible. The quick solution to this minor drawback is to launch a boat and relocate to a nearby prime viewing location.
High Rock Lake is quite large with many fingers of coves that snake around low hills of Rowan and Davidson counties. Crane Creek offers a perfect line of sight to the setting sun, just a few paddle strokes away from the Simmons home.
A kayak is a perfect platform for traveling across the lake. Aside from the positive exercise aspect, they are quick in the water, stable and very, very quiet. The wildlife that one frequently sees along the lake appears less threatened at the appearance of the slender long boats. A kayak also puts you very close to the water, which gives the feeling that you are literally sitting on the surface of the water.
A week ago Friday, I arrived in Anchor Downs about an hour before sunset to meet up with David and Carole. I spent a few minutes getting a little background about life on the lake and learned quickly how much they love living here. Without warning Nancy Graham and Kim Lance had slipped quietly into the cove where we were standing. The light was leaving us and time to get on the water was at hand. David graciously allowed me the use of his “sit-on-top” kayak which he uses for fishing expeditions. With cameras, life jackets and LED flashlights on board, we were off.
The water was green and dark as we exited the little cove that was lined with homes set back off the water. Conversations are easy when the only competing sound is the paddle cutting in and out of the water. As we followed along the banks toward the setting sun, Carole and Nancy pointed out interesting things that are unique to lake living. One thing that is not unique to Anchor Downs is that everyone you see on the bank greets you with a wave as you pass by. A shared joy of the water is the thread that pulls this and many other lakeside communities together.
The motorboat traffic had all but disappeared by the time we reached the mouth of Crane Creek and the sun was almost touching the trees. The water was almost flat, with a cool breeze hitting us in the face. The sun was making its final plunge for the day and the trailing reflections tapered off somewhere under the boat. We bobbled in near silence as the golden hour quickly passed. A survey of the surroundings found the distinct reddish-yellow hues splashed on the trees, the boats, the houses and the faces of those who ventured out of their homes to soak them in.
Two minutes later the sun fell below the horizon and the only color left was in the sky. The blues of shadows began to slowly take over the world as we turned to head back.
Carole and her kayaking friends, several of whom were not with us that night, get out on the water almost everyday. Much to my surprise, they don’t stop when the weather gets cold. They tell of one instance when they were on the lake when there was still some ice on the banks.
I understand that on some parts of the planet, because of the tilt of the earth’s axis, a sunset could take hours or even longer to complete. I also think that it is really cold there. It would probably be best not to mention that to Carole or her friends.
Jon Lakey is a photographer at the Salisbury Post.