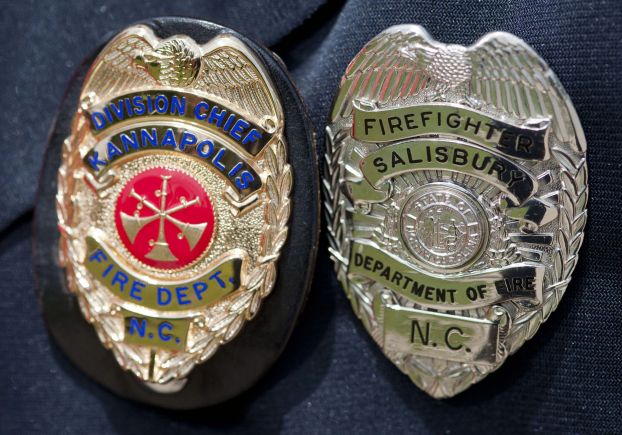 This Sunday, Rick and Caleb Barnhardt plan to kick back at the beach and enjoy some thick steaks. They’re celebrating. After all, it’s Father’s Day, it’s Caleb’s birthday, and Caleb, 21, has recently been named Rookie of the Year for the Salisbury Fire Department — a distinction he shares with his dad.
The Rookie of the Year award has been given by the Salisbury Rotary Club since the 1960s. Only one other father and son duo has received the award — Tom Lowman in 1972, and his son Matt in 2005.
That Caleb garnered the award does not surprise Chief Bob Parnell.
“It’s a commonly recognized thing that Caleb is Rick’s son,” Bob says. “The apple doesn’t fall far from the tree.”
Rick, 44, worked for the city of Salisbury from 1992 to 1997. He’s now division chief of emergency services with Kannapolis Fire Department.
When he worked in Salisbury, Rick earned the nickname “Pup” for his youthful appearance. They call Caleb “Little Pup.”
“I know Rick is very proud of Caleb,” Bob says. “He does an outstanding job for the city of Salisbury, just like his dad did. Rick and Caleb are firefighters to the bone.”
So much so that the two, who live in Rockwell, volunteer for the Rimer Fire Department on their days off. Caleb also works part-time for the city of Kannapolis’ Parks and Recreation Department.
Rick was the first member of his family to serve as a firefighter. A family friend was a firefighter in Concord, and Rick eventually became a volunteer with the Royal Oaks Volunteer Fire Department. It now serves the city of Kannapolis as Station 3.
Rick volunteered with the city of Kannapolis from 1986 to 1997, where he became one of the first 12 engine drivers or engineers the fire department hired.
In his current capacity, Rick says, “If it has a red light on it, I’m responsible for it.”
Rick has been a firefighter for 28 years.
“It’s a rewarding career,” he says. “Most folks aren’t happy with what they’re doing. I’m very happy.”
Rick and his wife, Kim, a registered nurse, also have three daughters, Hannah, 20, Sarah, 16, and Rebecca, 15.
Caleb pretty much grew up around the Kannapolis Fire Department. Every Sunday afternoon, families gather for dinner, as well as for holidays, because someone is always working.
Rick and Caleb have always done stuff together. They enjoy hunting and fishing, and Caleb has also inherited his dad’s passion for firefighting.
“I love it,” Caleb says, smiling his dad’s same, easy smile. “I was around it all the time.”
He adds, “I just thought it was cool. I liked helping people and using my talents and ability to do something good.”
Caleb graduated from Carson High School in 2011. He’s earning his fire protection technology degree from Rowan-Cabarrus Community College. Most of the classes are online, which dovetails well with his busy schedule. He has already received his firefighter certification, his EMT certification and materials certification.
“I try to work hard,” he says.
“He has a good work ethic,” Rick says. “He’s not afraid to get his hands dirty.”
Caleb says if he sees something that needs to be done, he does it.
His actions, obviously, have attracted positive attention.
“Caleb has excelled in everything that has been placed before him,” Bob says. “He interviewed well, and he’s had some good basic training. His father taught him well.”