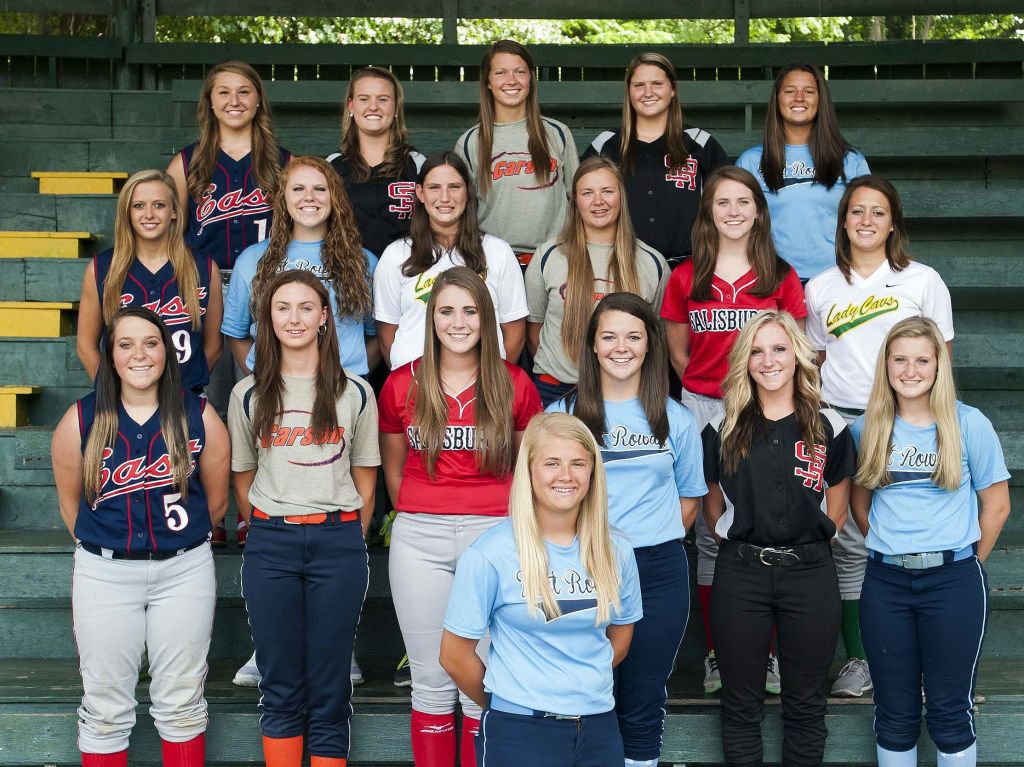 Hunter Gibbons keeps to herself most of the time, but she extends herself at the plate. Sometimes over the fence.
The West Rowan junior shortstop wasn’t always launching moonshots into the fields behind the wall in Mt. Ulla. She’s played softball since age 8, when she first began to play with the travel teams.
Gibbons is the county’s Player of the Year after catapulting the Falcons to a record of 18-6 and a conference championship. She hit a county-best 10 home runs.
“We all worked together,” Gibbons said. “We didn’t play like we did in previous seasons.”
Gibbons led the Falcons to a South Piedmont Conference title. She played in all 24 games, holding a team-best .557 batting average with 44 hits, 35 RBIs and 33 runs scored. The Falcons posted a 13-3 league mark and won 11 of 13 to finish he season. There were 15 games with multiple hits, including a pair of four-hit nights and five three-hit efforts. West blanked South Iredell in the first round of the playoffs before falling to Fred T. Foard.
“We never went out on the field and thought we were going to lose,” Gibbons said.
She keeps things simple and made it real easy for N.C. State to offer her a scholarship last fall.
Growing up in love with State, Gibbons went to Raleigh for a camp and hit four home runs on consecutive swings.
“I was pretty relaxed,” Gibbons said. “I wasn’t really stressing over it.”
The Wolfpack coaching staff called West coach Jimmy Greene the next day and he confirmed it was no fluke.
“Hunter’s a tremendous athlete, but she’s put the work in to make herself better,” Greene said.
The West Rowan shortstop is growing up and its evident in the distance she can hit a softball. That was evident on opening day against Northwest Cabarrus when she hit two over the fence in a 10-3 win. Gibbons also capped a seven-run second inning in the SPC Championship game against East Rowan with a two-run blast.
“I used to never hit it that far,” Gibbons said. “I guess I gained a lot of muscle.”
College of Charleston showed interest early on and Gibbons considered the Cougars until State came calling.
“State’s been my dream school but I didn’t expect a big school would ever offer me,” Gibbons said. “I fell in love with them when I was a little kid.”
“She’s worked hard and perfected her swing,” West coach Jimmy Greene said. “She’s got very fast hands and when she hurt her knee a couple years ago she learned to use her whole body.”
Gibbons hopes West can continue its success next year when she’ll be a senior. Gibbons is the sister of current Catawba soccer player and former Falcon Brittany Gibbons.
“We were all there for a reason,” Gibbons said. “That was to win.”
•••
West had a solid core of players and placed four others on all-county in addition to Gibbons. Sophomore Peyton Greene was the county’s top pitcher with a 1.21 ERA and 12 wins. Greene batted cleanup and hit .329. Second baseman Taylor Martin was a model leadoff hitter stealing 10 bases. She scored 31 runs and had 37 hits in a team-high 99 plate appearances. Marissa Yow hit .329 and caught for Greene. Yow has committed to Radford. Center fielder Catherine Whitley batted .329 and boasted a perfect fielding percentage.
Gibbons, Yow, Greene and Martin all return next year.
Carson’s Michaela White had a huge year, hitting .527 and led the Cougars with 39 hits while playing a dependable shortstop. White will play volleyball at Charlotte. Mariah Morgan was a slugger, hitting .529 for the Cougars, and Kaycee Kennedy batted .427 and finished with five doubles.
East Rowan’s Kaleigh Troutman blasted eight home runs. Pitcher Bree Medlin and third baseman Lara Drew were also big contributors for the Mustangs.
South Rowan’s Samantha Kennerly was effective at the plate (.351 average) and the circle (5-3, 3.85 ERA). Sophomore Abby Fields had the best average (.429) on the Raiders. Designated player Caitlin Waters hit .403 and drove in 19 runs with a team-high 25 hits.
Salisbury’s Caroline Forbis led the Hornets on the mound and was runner up for Central Carolina Conference Pitcher of the Year. SHS center fielder Anna Tonseth was CCC Player of the Year runner-up.
North Rowan catcher Anna Lingle and freshman shortstop Ashlyn Mills were Cavalier representatives. Mills batted .514, tripled three times and homered once. Lingle, a senior, was a sound defensive catcher.