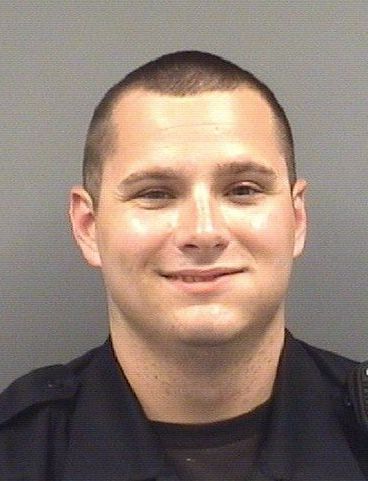 The Salisbury Rotary Club presented rookie and veteran of the year awards Tuesday to members of the Salisbury Police Department, Rowan County Sheriff’s Office, State Highway Patrol, Rowan Emergency Services and Salisbury Fire Department.
“Every day they put their lives in danger for us,” said Rotarian Dianne Green, leading off the presentation. The awards were a small way to thank them, she said.
Sheriff Kevin Auten and other presenters said they hear a lot from the public when something goes wrong and they appreciated the recognition.
• Deputy Cody Trexler, rookie officer of the year, is a graduate of East Rowan High and Rowan-Cabarrus Community College. Auten said Trexler had a 69 percent clearance rate last year as a patrol deputy and does a good job of staying in touch with crime victims. His goal is to become an investigator.
• Sgt. Greg M. Hannold, veteran office of the year, graduated from Catawba College and earned a master’s from Methodist University. Auten said Hannold had served in several capacities since joining the department in 2007 — bailiff, child abuse investigator and in-service training officer — and last year changed to the civil side. “If he does it, he does it right,” Auten said.
Lennie Cooper, EMS division chief for Rowan Emergency Services, presented awards for his agency.
• Paramedic Selina Rodriguez, the EMS rookie of the year, is “not your typical rookie,” Cooper said. At 18 while working with the Red Cross, she received her EMT training in the Philippines, where she worked at Clark Air Base. She worked in Florida as an EMT and firefighter before returning to North Carolina where she received her paramedic credential. She has been a driving force behind the critical incident management team, since joining Rowan EMS in 2013.
• Paramedic Robert L. Fox, veteran office of the year, showed an interest in EMS work as a child, Cooper said; according to his mother, he called ambulances “woo woo” boxes, Fox joined the EMS ranks in 1990, completed paramedic training in 1996 and has 24 years in pre-hospital emergency medicine. He has been with Rowan County since 2010.
Chief Rory Collins, who said he was always looking for “an opportunity and reason to pat our people on the back,” said the recipients from the Salisbury Police Department were nominated by their peers.
• Officer Michael Dishman, rookie officer of the year, worked at Walmart for 18 years, 16 in loss prevention, Collins said. He encountered police often as he apprehended people and turned them over to law enforcement, and decided to go into law enforcement. Since joining the police department two years ago, he has proved to be proactive, issuing 417 citations, making more than 400 arrests and turning in 396 incident reports. He has made nearly 120 drug arrests.
• Lt. Brian Stallings, veteran officer of the year, interned at the Salisbury Police Department when he was a senior at Pfeiffer College. He has a passion and skill for police work and is a great leader of the men and women his unit, Collins said. Stallings has been a patrol officer, detective, sergeant and now a commander, and almost every year his unit has a clearance rate above the national average, Collins said. He has a master’s degree in governmental administration and is considered an expert by the courts in the field of domestic violence.
Chief Bob Parnell brought along plaques bearing the names of the Salisbury Fire Department’s rookie and veteran firefighters of the year for decades. “We all covet the Rotary awards,” he said.
• Fire Engineer Chris Naylor was named veteran firefighter of the year. With the department since 2006, he has certification in several areas and since 2009 has been an engineer — meaning he gets to drive the fire truck, Parnell said.
Naylor has an outstanding attitude, surpasses expectations, is excellent with the public and was just promoted to fire lieutenant.
• Caleb Barnhardt, rookie firefighter of the year, started with the department in 2013, following in the footsteps of dad Rick Barnhardt, who was the SFD’s rookie of the year in 1993 and is now with the Kannapolis Fire Department. Caleb is respectful and especially caring, Parnell said, so much so that after one call on Monday amid the storm, the family’s German shepherd jumped into the truck with Caleb and would not leave. The dog was eventually carried back to the family.
Sgt. R.W. Whitley, new to this area, commented on the family of agencies represented at the meeting. “It really is a family,” he said. He sees them working well together on accident scenes.
Whitley was there to present awards to two brothers who he said work together most of the time and are very productive:
• Hugh Travis Sloop, honored as rookie trooper of the year, graduated from East Rowan High and Appalachian State and has been on patrol since 2011, two years in Iredell County.
Troopers always want to get back home, Whitley said, and Sloop issued more than 3,000 charges last year on the roads of Rowan County.
• Douglas Tyler Sloop, veteran trooper of the year, had to leave the meeting early to be in court.
He started patrol school in 2005 and came straight back to Rowan, where his wife is a detective with the Rowan County Sheriff’s Office. They are expecting twins.