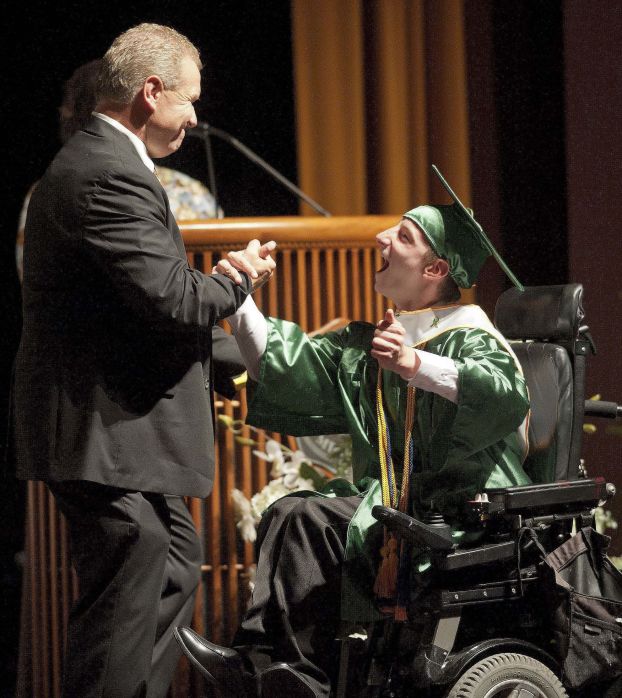 North Rowan High School’s graduation Thursday was far from somber — cheers flooded Keppel Auditorium time and time again as the lively crowd congratulated each graduate who walked across the stage.
For Principal Dr. Darrell McDowell, graduation was particularly bittersweet this year. He’s been with these students since they entered middle school at North Rowan Middle, and, like the graduates, this year is the end of his chapter of life at North Rowan High.
McDowell told the graduates that his time with them was the “richest seven years” of his life, and he “could not be more proud to be a Cavalier and a part of what’s on this stage.”
Before the ceremony, McDowell said this year’s graduating class has “been a part of something that’s really special,” and he’s seen great cultural, social, academic and athletic victories among them.
When McDowell took over North Rowan High School, the football team had lost 26 games in a row, and the school’s graduation rate was at 61 percent. This year, the football team won every game but one, and the graduation rate is up more than 20 percentage points.
“We have a large number of kids that have worked hard for all seven years,” McDowell said, adding that many of them are “going on to compete at the next level,” including student athletes and many who never thought they’d go to college.
“We’ve never focused on limitations,” he said before the graduation. “We’ve focused on opportunities.”
“We’ve been together seven years,” he said, adding that in that amount of time, “you really get to know people.”
“There’s a bond between this group of kids,” McDowell said.
Michael Ransome, a wheelchair-bound honors student, is symbolic of that bond, McDowell said.
“Our kids — their hearts are tender,” he said. “We care a lot about each other.”
When Ransome’s name was called, there was no doubt about that bond. The entire room erupted into cheers as Ransome rolled across the stage and hugged McDowell rather than the customary handshake.
“He was like a father to us,” North Rowan Senior Class Vice President Jahari Rustin said of McDowell.
“He helped us get to where we are today,” he added.
After the ceremony, McDowell said, “It feels like your own children.”
“Some of these kids are going on to great things,” he added.
Next year, McDowell will take the position of principal at Lavonia Elementary School, a kindergarten through fifth grade school of about 600 students in Franklin County, Ga.
He said he’s excited about the “new challenge.” McDowell has served as principal in a middle school and a high school. While he has worked in an elementary school, he’s never been principal of one.
Rustin said his time at North Rowan has prepared him for life ahead.
“I’m going to miss everybody, but it feels great,” he added.
Rustin said the school’s excellent teachers played a key role in his success.
“They take the time to work with you,” he said.
Rustin plans to attend Shaw University in the fall.
Destin’ae Hill, who is the first person in her family to graduate from high school, said she’s “relieved” for school to be over.
“I learned from my friends to be me,” she said, as she reflected on her time at North Rowan.
Hill plans to get a job, and then attend the University of Tampa in the spring.
“It feels like I’ve accomplished something,” said Kiera Hosch-Carroll.
Hosch-Carroll said she “learned a lot” at North Rowan, and her favorite part of high school was being on the cheerleading team.
Hosch-Carroll plans to attend Winston-Salem State University and major in criminal justice.
Also in attendance Thursday were Assistant Principals Antoine Brisbon, Kimberly Martin and Harriet Wood, Assistant Superintendents Anthony Vann and Nathan Currie and Chairman of the Board of Education Dr. Richard Miller.
North Rowan contributed 147 of the Rowan-Salisbury School System’s 1,281 graduates this year.
East Rowan, South Rowan, North Rowan, Henderson and Salisbury high schools held their ceremonies in Keppel Auditorium at Catawba College on Thursday. West Rowan and Carson held graduation events at the schools.