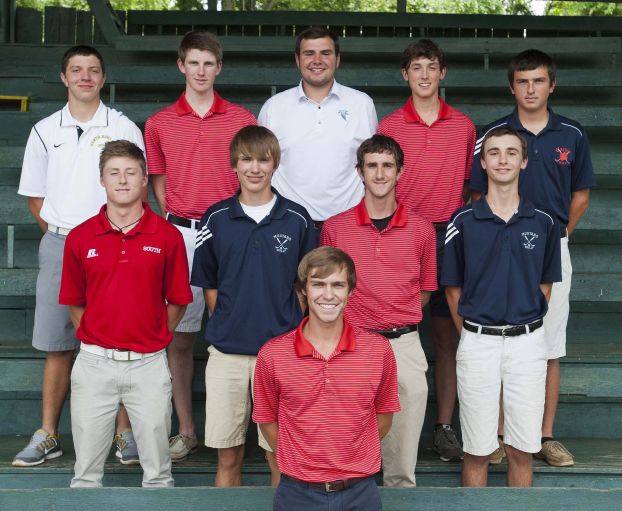 Salisbury senior Eric Edwards entered each season with sky-high goals — win the regional, win the state, win the team state championship.
On his list of priorities, to be honest, the Rowan County Championship was pretty far down.
“When you go into a season, you know that’s not going to be the biggest tournament you’ll play in,” Edwards said matter-of-factly.
But it’s become an increasingly special event due to the raised level of play around the county.
West Rowan’s Jake Kennedy is a Gardner-Webb signee, while South Rowan’s Davis Richards is committed to N.C. State. Every school boasts at least one exceptional player, and with the rise of South which dethroned Salisbury as county champion by a single stroke in 2013, even the team competition, a glorified Salisbury High Invitational for a long time, has become quite lively.
Edwards got pumped up enough on March 27 to shoot 71 for medalist honors and the title of Rowan County Golfer of the Year that came along the ride.
More important for Edwards, his score offset Richards’ 72. That allowed the Hornets, who also got fine rounds from Chris Queen (79), Abraham Post (79) and Gabe Steinman (81), to top South by five shots and recapture team bragging rights in Rowan County.
“There are strong golfers all over the county, but we’re all friends as much as we’re competitors,” Edwards said. “The thing that mattered about that day for me individually wasn’t that I beat Davis or any of the others — it was that I played well at Corbin Hills. Corbin always has been a tough course for me.”
Edwards has been tougher than the courses he’s played for a long time. We’ve been hearing about him since he was a promising fourth-grader at Sacred Heart.
Eric started learning the game by putting to finish holes for his father, Todd, and he gradually worked his way back.
“My dad believed the short game was the most important part of golf, and it was a while before I hit a drive, even from the red tees,” Edwards explained. “The short game is still my strength.”
Edwards burst onto the local prep scene on a windy, April day at McCanless in 2011.
Salisbury had six golfers shoot 78 or better in a dominating performance. Edwards was medalist, winning by four shots over a field that included three talented older teammates — Roy Dixon, Alex Nianouris and Troy Beaver — all of whom are D-I golfers now.
“I’d never played McCanless so I went out there without any expectations at all and sometimes I play my best when I just play,” Edwards said. “I was playing with (Carson’s) Andrew Purcell. We had a good time and I played very relaxed.”
As a freshman, Edwards had walked into a great situation. No pressure.
“He had five upperclassmen in the top six that he could learn from and soak up all of their experience,” SHS coach Dale Synder said. “He certainly had the talent to come in as a freshman as the No. 1 golfer on most teams, but during his first two years he had plenty of role models to teach him the ropes.”
Golf isn’t as easy as Edwards made it look when he burned up McCanless. He didn’t win the county in 2012 when Nianouris took the crown. Nor did Edwards win in 2013 when East Rowan youngster Logan Shuping grabbed the title. But as a senior, Edwards book-ended his career with a second county triumph.
Edwards was a big part of SHS’ 2A state championship teams in 2011 and 2012, a fourth-place finisher in 2013 and a third-place finisher this season.
“We surprised people, I think,” Edwards said. “We had some young guys who really worked and came a long way this year.”
Edwards was part of three Midwest Regional champions. The Hornets finished second this season despite Edwards’ 71.
The one thing that proved elusive for Edwards in his prep career was an individual state title.
He shot an opening-round 71 in 2011 but wound up tied for 10th. He placed third in 2012 and tied for fifth in 2013.
His best chance was this season when he made the turn for the final nine tied for first. He finished as state runner-up at Longleaf Golf and Country Club in Southern Pines.
“I actually played my best golf the whole season in the state,” Edwards said. “But a guy (Southwest Edgecombe’s Cole Jefferys) made birdies and shot 68 on the last day. Nothing you can do about that.”
The best score Edwards ever has shot is 65.
He’ll continue his career at D-I George Mason in Fairfax, Va.
“It’s a developing program,” Edwards said. “If I play well, I can make the starting five as a freshman,”
Snyder noticed a change in Edwards after he made his college commitment.
“I definitely think that once he decided on George Mason, he was able to relax and just play golf,” Snyder said. “It was like a weight lifted off his shoulders. Once he had that behind him, he was able to be much more of a leader, and he has a chance to continue being a leader in college.”
The ultimate goal for Edwards is a pro career.
“That’s been a goal since I was young,” he said. “I’m just taking things step by step.”
•••••••
All-county golf was decided by that one day in late March at Corbin Hills.
Besides Salisbury’s Edwards, Queen, Post and Steinman, South’s Richards and Evan Neas (77), West’s Kennedy (76), East’s Nick Lyerly (77) and Shuping (79), North’s Tyler Mulkey (80) and Carson’s Bobby Bauer (81) made the team. There are 11 instead of 10 because of a tie for the 10th spot.