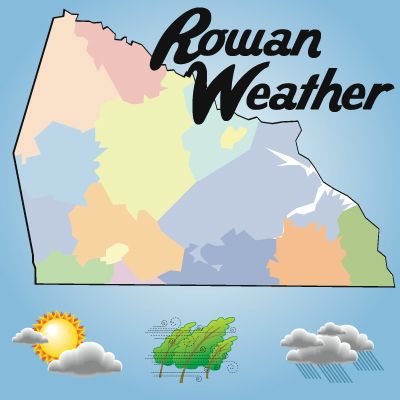 Wednesday’s storms were so widespread and powerful that at one point, 22,000 people in North Carolina were without power. Hardest hit were Durham and Wake counties, where some people are still waiting for power to be restored.
The National Weather Service estimates about 3 inches of rain fell in the Raleigh-Durham area.
Few of us had that much rain, but the next five days all have the potential for more storms. Today’s hazardous weather outlook warns that as the storms develop today, lightning will be dangerous, with the possibility of hail and gusty winds.
At the same time, some storms will move very slowly, leading to heavy rainfall over a small area over a long period. That can lead to flash flooding, especially in urban areas.
Temperatures will moderate slightly today under mostly cloudy skies, with a high near 83. A 50 percent chance of showers and storms could begin as early as 9 a.m. It’s not good day for all the high school graduations, even though most will be inside. West Rowan’s ceremonies were at 8 a.m. in their stadium. Those seats are probably wet.
Winds will be from the south southwest. Tonight, there’s a slight drop in the chance of rain, to 40 percent, with a low around 65.
Friday will be slightly warmer, with partly sunny skies and a high of 85. The chance of showers and storms is 40 percent for the day and the night, with a low near 62.
The chance of rain drops slightly for Saturday and Sunday, but with warm temperatures and high humidity, storms and showers could develop. The chance of rain is 30 percent for both days. Saturday will be mostly sunny with a high near 83 and winds from the north northeast. Saturday night’s low will be around 63, with rain mainly before 9 p.m.
Afternoon and evening rain can be expected Sunday, a 30 percent chance. Skies will be partly sunny with a high near 83; low near 66.
Monday won’t be much different, except mostly sunny and hot, near 86, again with the 30 percent chance of precipitation; the low is expected to be around 67. Tuesday’s going to be a repeat, except even warmer, with a high of 88, and 30 percent chance of rain. The low will drop to around 68.
At this point, the forecast for Tuesday is mostly sunny and quite hot — 89, with no mention of rain. Just wait and see.