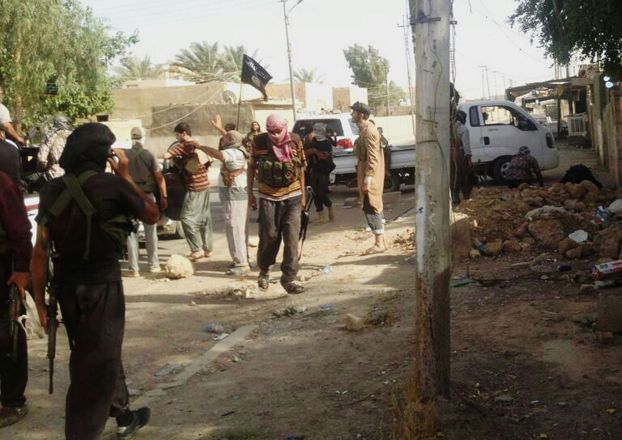 BAGHDAD (AP) — Al-Qaida-inspired militants pushed deeper into Iraq’s Sunni heartland Wednesday, swiftly conquering Saddam Hussein’s hometown of Tikrit as soldiers and security forces abandoned their posts and yielded ground once controlled by U.S. forces.
The advance into former insurgent strongholds that had largely been calm before the Americans withdrew less than three years ago is spreading fear that Prime Minister Nouri al-Maliki, struggling to hold onto power after indecisive elections, will be unable to stop the Islamic militants as they press closer to Baghdad.
Fighters from the Islamic State of Iraq and the Levant militant group took control Tuesday of much of Iraq’s second-largest city, Mosul, sending an estimated half a million people fleeing from their homes. As in Tikrit, the Sunni militants were able to move in after police and military forces melted away after relatively brief clashes.
The group, which has seized wide swaths of territory, aims to create an Islamic emirate spanning both sides of the Iraq-Syria border.
The capture of Mosul — along with the fall of Tikrit and the militants’ earlier seizure of the western city of Fallujah — have undone hard-fought gains against insurgents in the years following the 2003 invasion by U.S.-led forces.
The White House said the security situation has deteriorated over the past 24 hours and that the United States was “deeply concerned” about ISIL’s continued aggression.
There were no reliable estimates of casualties or the number of insurgents involved, though several hundred gunmen were in Tikrit and more were fighting on the outskirts, said Mizhar Fleih, the deputy head of the municipal council of nearby Samarra. An even larger number of militants likely would have been needed to secure Mosul, a much bigger city.
The militants gained entry to the Turkish consulate in Mosul and held captive 48 people, including diplomats, police, consulate employees and three children, according to an official in the office of Turkish Prime Minister Recep Tayyip Erdogan. Turkish officials believe the hostages are safe, he said, speaking on condition of anonymity because he was not authorized to comment to reporters on the sensitive issue.
Turkish officials did not make any public comment on the seizure, but the state-run Anadolu Agency reported that Erdogan convened an emergency Cabinet meeting. U.N. Secretary-General Ban Ki-moon strongly condemned the abductions and the seizure of Iraqi territory by the militants, urging “the international community to unite in showing solidarity with Iraq as it confronts this serious security challenge.”
“Terrorism must not be allowed to succeed in undoing the path towards democracy in Iraq,” Ban said.
While the insurgents have advanced southward, Baghdad did not appear to be in imminent danger from a similar assault, although Sunni insurgents have stepped up car bombings and suicide attacks in the capital in recent months.
So far, ISIL fighters have stuck to the Sunni heartland and former Sunni insurgent strongholds where people are already alienated by the Shiite-led government over allegations of discrimination and mistreatment. The militants also would likely meet far stronger resistance, not only from government forces but by Shiite militias if they tried to advance on the capital.
Mosul, the capital of Ninevah province, and the neighboring Sunni-dominated province of Anbar share a long and porous border with Syria, where the Islamic State is also active.
Mosul’s fall was a heavy defeat for al-Maliki. His Shiite-dominated political bloc came first in April 30 parliamentary elections — the first since the U.S. military withdrawal in 2011 — but failed to gain a majority, forcing him to try to build a governing coalition.
Al-Maliki said a “conspiracy” led to the massive security failure that allowed militants to capture Mosul, and warned that members of the security forces who fled rather than stand up to the militants should be punished.
He stopped short of assigning direct blame, however, choosing to focus instead on plans to fight back — without giving specifics.