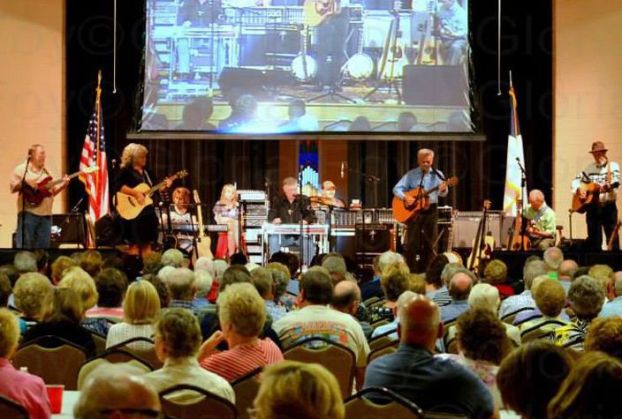 The Country Music Legends Band is the headliner at the ninth annual Nashville on the Lake music event, at 7 p.m. on Saturday, June 14.
It started nine years ago as a benefit for Cystic Fibrosis and last year for the late Paul Hill, to raise money for a sound system for Liberty United Methodist Church, and has grown into a local tradition.
There is no admission charge but donations greatly appreciated. The Country Music Legends Band plays locally at the V.A. and the nursing homes as well as the local churches.
Bring a chair and join the band (Darrell Connor, Jack Kee, G.W. Saunders, Larry Tucker and Fred Carpenter), along with some special guests from Nashville. On hand to make music with the Legends will be Lynn Owsley, one of Earnest Tubb’s Texas Troubadours, Carolina Rose, Megan Stoner and Ricky Traywick, Randy Travis’ brother. Come early and meet and great the band.
Food concessions will be provided by the Boy Scouts of St. Matthews Lutheran Church.
Directions: Take Bringle Ferry Rd. approx. 3.5 miles past Dan Nicholas Park, and turn left on Clark Road. It is the first drive on the right, 2585 Clark Road.
Call 704-637-6261 for more info or find The Country Music Legends Band on Facebook.
CLEVELAND — The Bluegrass sing at CJs BBQ on Friday features the talents of three local sisters.
Tori, Katie and Elli are The Jones Sisters. Tori, 16, Katie, 14 and Elli, 10, each began her musical journey classically at the age of 5.
Tori enjoys playing the fiddle, mandolin and guitar. Katie plays the classical harp and bass for the band. Elli sings lead and plays guitar. They look forward the Bluegrass festivals each summer, where they can showcase their talents.
The girls have won numerous awards for their bluegrass music. In 2013, they won first for Junior Band at the Alleghany Fiddlers Convention. Also, in 2013 Tori played against the tough competition of a seasoned fiddle player recognized as the Grand Champion Fiddler at the Granite Quarry Fiddlers Festival.
CJ’s BBQ is located at 210 Old Amity Hill Road. Call 704-278-4070 for more information.
The cast of Piedmont Players Theatre’s production of “Look Homeward, Angel” by Thomas Wolfe has been announced.
The story traces the coming of age of Eugene Gant in the small town of Altamont, N.C. Eliza, his mother, is a woman with the proverbial iron hand in the velvet glove, who must run Dixieland, her seedy boarding house, and deal with an alcoholic husband, a daughter and two sons.
“Look Homeward, Angel” is part of PPT’s Summer Swap and these performances will take place at the Norvell Theater, 135 E. Fisher St.
Performance dates are July 24 through Aug. 2. Tickets go on sale July 14.
Meet the cast:
Hugh Barton: Justin Davis
Helen Gant Barton: Sarah Dover
Eugene Gant: Austin Young
Ben Gant: Keaton Brower
W.O. Gant: Philip Shore
Luke Gant: Cherokee Earnhardt
Eliza Gant: Carole Davis
Will Pentland: Neal Brower
Laura James: Louisa Garner
Mrs. Marie “Fatty” Pert: Shakeisha Gray
Mrs. Clatt: Nancy Gaines
Jake Clatt: Joshua Doyle
Florry Mangle: Hayley Vanhoy
Mrs. Snowdon: Ethel Younts
Miss Brown: Savannah Deal
Mr. Farrel: Rodney Lippard
Dr. Maguire: David Kolb
Tarkinton: Gus Andrews
Madame Elizabeth: Tamara Sheffield
The Norvell Theater is located at 135 E. Fisher St., 704-633-5471.
Piedmont Players Theatre set construction for “Look Homeward, Angel” will be held on Saturday, June 21, from 10 a.m. to 5 p.m. (lunch will be provided) and Sunday, June 22 from 1 to 5 p.m. No experience is required. Come for an hour, come for the weekend. Held at the Norvell Theater, 135 E. Fisher St. 704-633 5471. PiedmontPlayers.com
Part of the Friday Night Out series event in downtown Salisbury, Arts Night Out will be held June 20, from 5 to 9 p.m.
This event provides artists the opportunity to feature and sell their works during Arts Night Out on Easy Street (Liberty and N. Main Streets), on the street by Waterworks Visual Arts Center, and on East Fisher Street. Also eligible are live art demonstrations, acoustic musicians and drum circles.
For more information on applying, contact project coordinator Mollie Ruf, by Friday at mollie@visitsalisburync.com or call 704-637-7814.
SPENCER — Central United Methodist Church will be conducting its 15th year of puppet ministry at the Library Park on 3rd Street. The Circus Train’s talking animals will sing songs, play games and tell about God’s love every Saturday at 7:30 p.m. beginning June 14 through July 26.
Bring a lawn chair, a blanket, your family and friends and enjoy free snow cones and free hot dogs.
The Fin-Feather-Fur Outdoor Expo is coming to the Rowan County Fairgrounds from Aug. 15 to 17.
It is open to vendors of hunting, fishing, camping merchandise as well as ATVs and golf carts. Inside air conditioned booths are $300; outside booths are $100.
Mountain Man from Duck Dynasty will be on site Saturday and Mud Bog on Friday. Call Randall Barger 704-640-2326 to enter or reserve a booth.
Mooresville — The Astronomical Society of Rowan County will be celebrating its 33rd year on Saturday, June 28 at 6:30 p.m. at 1920 Deal Road.
The club members are planning a cookout to celebrate this milestone. Weather permitting, there will be a chance for stargazing that night. Anyone interested in coming should bring their telescope and binoculars.
For more information contact Ralph Deal at 704-855-1591 or Alice Deal at 704-857-2788.
______________

MOCKSVILLE — Broadway’s Best Theatre Company presents the final show of their 2014 Bare Bones II Season, “Broadway Showstoppers,” with a preview on June 19, the First Friday opening night on June 20 and additional performances on June 21 and 22 as well as June 26 through 29.
The show features Broadway favorites from dozens of Broadway musicals that “stopped the show.”
“Showstoppers” features three new performers to Broadway’s Best, including Sarah Jenkins, who has performed in Lost Colony and with a number of Triad theatres; Kate Sorrells and ?Thao Nguyen, voice majors at UNC School of the Arts; and a patrons favorite, Zachary Eley-Durbin. The musical revue showcases the outstanding vocal talents of the cast in two full acts of Broadway favorites.
Preview tickets are $15 for adults and seniors and $10 for students. First Friday/Opening Night Tickets are 10% off regular prices, plus patrons are treated to a reception hosted by the Broadway’s Best Theatre Guild.
Regular ticket prices are $20 for adults, $16 for seniors and $12 for students. Evening performances are at 7:30 p.m.; Sunday performances are matinees start at 2 p.m.
Broadway’s Best Theatre Company is located at 103 Beechtree Place, near the intersection of I-40 and Farmington Road, Exit #174, in Davie County.
For tickets and information, visit www.broadwaysbest.biz
______________

The Galleries have opened a new exhibit that will provide a perfect opportunity to introduce yourself to art or give the art enthusiast a break from serious art.
“Comic Relief challenges the misconception that fine art is usually uptight and serious,” said Rebecca Collins, Cabarrus Arts Council visual arts director and curator for the exhibition, which runs through July 31.
The Galleries are located in the Historic Cabarrus County Courthouse at 65 Union St., South.
Due to unforeseen circumstances, the Kannapolis Roller Girls Roller Derby bout, previously scheduled for later this month, is canceled. They do plan to continue their season of away bouts and plan to return to the Cabarrus Arena in November. They thank their fans and hope you understand. Keep checking their website at www.kannapolisrollergirls.com for updates.
Concord’s Market off Market Street event, is July 26 from 10 a.m. to 4 p.m. For vendor applications contact Kristin@concorddowntown.com
Six-time-winners of the Vocal Group of the Year award, Diamond Rio, will be performing at the Cabarrus Arena on Sept. 26. This band has sold over 10 million albums earning three platinum and five gold records.
Tickets are available at the Cabarrus Arena box office, at Ticketmaster.com or by phone at 1-800-745-3000.
CONCORD — The new Davis Theatre season features a season that includes the Annie Moses Band, which has wowed audiences from Carnegie Hall to the Grand Ole Opry with its unique chamber pop, and Americana favorite The Steel Wheels.
The flagship On Stage at the Davis series will open Oct. 3 with jazz by the John Brown Quintet, an all-star line-up of North Carolina musicians that sold out the Davis previously, followed by the Annie Moses Band’s Rhapsody in Bluegrass on Nov. 6, The Steel Wheels’ high-energy Americana on Jan. 24, the Jeff Little Trio’s Appalachian blues on March 20 and blues legend Mac Arnold and Plate Full O’ Blues on May 1.
In addition to the On Stage at the Davis series, the season includes a variety of performers, from bluegrass to jazz to reggae rock, from the region.
Tickets go on sale Tuesday, July 1 at www.CabarrusArtsCouncil.org or by phone at 704-920-2753.
The Davis Theatre is located at 65 Union St. S in downtown Concord in Cabarrus County’s historic courthouse.

The Charlotte Folk Society wraps up its current Gathering Concert series with a members’ showcase on Friday, at 7:30 p.m. at the Great Aunt Stella Center, 926 Elizabeth Ave.
Guests are invited to arrive at 7 p.m. to enjoy a 30-minute performance by the Community Singers, an intergenerational folk choir. See more at www.folksociety.org
______________

On Oct. 25, Air Supply is coming to the Reynolds Auditorium for a night of ’80s soft rock hits. Who can forget “Lost In Love,” “Making Love Out Of Nothing At All,” “All Out Of Love” and “Even The Nights Are Better.” No-fee tickets are on sale at https://reynoldsauditorium. com /AIR_SUPPLY.html

The Nazareth Children’s Home FunFest is an annual tradition in Rowan County. This year’s event is Saturday from 9:30 a.m.... read more