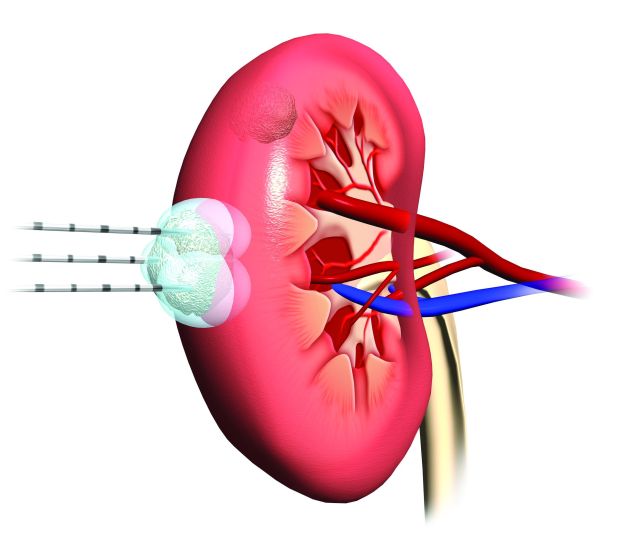 SALISBURY — Doctors at Novant Health Rowan Medical Center are now using extreme cold to kill small kidney tumors without damaging the rest of the organ.
Called cryoablation therapy, the procedure uses very thin needles inserted into the kidney through the skin to deliver the therapy directly to the site of the tumor. Argon gas is circulated through closed metal needles to create freezing temperatures and form ice, which the doctor then shapes around the tumor to destroy it.
Studies show the procedure is 92 percent to 98 percent effective in treating cancerous tumors.
“Cryoablation allows us to use the most advanced technology to treat kidney tumors in a minimally invasive fashion,” said Dr. Paul Capito, an interventional radiologist with Rowan Medical Center who is pioneering the technique at the hospital, in a news release. “Not only is it extremely safe, but because it’s performed without an incision, patients experience minimal bleeding, shorter recovery periods and a much lower risk of infection.”
Previous treatment methods included radiofrequency ablation, or RFA, which uses heat to destroy the tumor, or surgically removing part or all of a diseased kidney. However, RFA can cause more damage to surrounding healthy kidney tissue than cryoablation, and open surgeries require longer hospital stays and recovery periods.
Cryoablation, on the other hand, can often be performed in an outpatient setting, or with a one-night hospital stay, with patients returning to normal activities in one to two days. In comparison, a traditional kidney surgery generally requires several days’ hospitalization, along with a one- to two-week recovery at home.
Not all tumors are candidates for this treatment option. Ideally, tumors treated with cryoablation are typically smaller than 4 centimeters and located within the kidney. Patients must be referred by a urologist, and the procedure is usually covered by insurance.
In addition to lower complication risks, cryoablation also offers the added benefit of allowing patients to keep a kidney that is predominantly healthy rather than discarding it due to a very small tumor.
“There are roughly 51,000 cases of renal cell carcinoma diagnosed each year, and many of them are discovered almost by accident while doctors are performing CT scans for unrelated conditions, such as undiagnosed abdominal pain,” said Dr. Wink Cline, a urologist with Rowan Medical Center. “Cryoablation gives us a great opportunity to remove these tumors while they’re still very small and save an otherwise healthy kidney.”

SALISBURY — Food Lion today pledged to donate 500 million meals to families in need by the end of 2020... read more