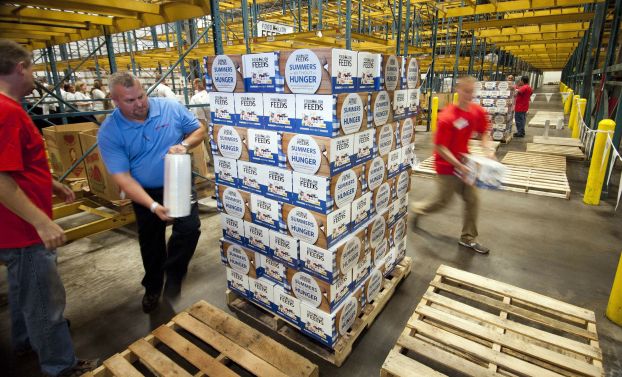 SALISBURY — Calling Food Lion’s pledge to provide 500 million meals to hungry people “amazing,” the executive director of Second Harvest Food Bank of Metrolina on Monday said the Salisbury-based grocer continues to lead the fight against hunger in North Carolina.
“Food Lion is doing something revolutionary yet again,” Kay Carter said during the launch of Food Lion Feeds, the company’s new six-year hunger relief initiative. “They are standing as a company on one issue, and that issue is hunger. They recognize that while there are a lot of great causes out there, hunger is a basic, fundamental need.”
Food Lion was the first area grocery chain to start a retail pick-up program in 2002, allowing food pantries like Rowan Helping Ministries to pick up discontinued items, less than perfect produce and excess food at least once a week, Carter said. Nearly every grocery chain has followed suit.
Now, Food Lion President Beth Newlands Campbell says her company will provide 500 million meals by the end of 2020 to 30 partner food banks in the 10 states where Food Lion does business. Rowan Helping Ministries is part of the Second Harvest network of food pantries.
“No child can learn in school if they’re hungry, no senior can stay in their home and stay healthy if they’re hungry, no one can concentrate on finding a job if they’re hungry,” Carter said. “To have a company as big as Food Lion step out and say, we’re making hunger our number one goal, I think is huge. I think it’s revolutionary.”
At Monday’s announcement at Food Lion headquarters — part press conference, part pep rally, part community service event — more than 350 Food Lion employees, dignitaries and food bank representatives packed and donated 2,500 “Summers Without Hunger” food boxes headed to Rowan Helping Ministries, Second Harvest and the Food Bank of Northwest North Carolina to provide more than 30,000 meals to families in the Charlotte and Winston-Salem areas this summer.
To mark the launch of Food Lion Feeds, the company will donate 1 million meals in five days as part of a week of giving. Newlands Campbell and some of her top executives will hit the road today to stop in Baltimore, Myrtle Beach, Raleigh and Norfolk, Va. to donate meals to facilities that serve children, seniors and veterans.
A new TV commercial began airing Monday featuring the company’s talking lion urging customers to buy a reusable Food Lion Feeds shopping bag. Food Lion will provide five meals to local food banks in partnership with Feeding America for every $1.19 bag sold.
Feeding America is the nation’s largest hunger-relief organization comprised of a network of more than 200 member local food banks.
Roughly 63,000 Food Lion associates also donned Food Lion Feeds white wristbands. Newlands Campbell said the bracelets are a small gesture that she hopes will lead to a larger conversation about hunger, noting the entire community must be involved to find a sustainable solution.
“We’re proud to lead the way,” she said.
The 500 million meals will come through direct company donations, partnerships with vendors, volunteerism from Food Lion employees and contributions from Food Lion customers. Newlands Campbell said the company will keep a running tally of the program’s cost but did not have an estimate.
“Giving back is part of who I am, what our associates want to do and quite frankly, what good companies do,” Newlands Campbell said. “… It’s in our DNA. We want our customers, our neighbors and our communities to know that they can count on us.”
Food Lion was built on a foundation of serving local communities, thanks to co-founder Ralph Ketner, Newlands Campbell said. Ketner, 93, was instrumental in starting Rowan Helping Ministries and received the loudest, longest applause when Newlands Campbell introduced him Monday and called him a “rock star.”
Carter said she hopes Food Lion has started another industry trend, as the company did 12 years ago with the retail pick-up program.
“I still believe hunger is solvable,” Carter said. “It may be another generation that finally solves it, but when you have things like today, it’s a huge shot in the arm not just for people in need but for the people who work in these food banks.”
Newlands Campbell, who worked her way up through sister chain Hannaford from clerk to president, said she witnessed hunger in the checkout line.
“When I was a store manager, I saw firsthand the tough choices our customers are sometimes forced to make to feed their families,” she said. “In difficult times, many people have to decide whether to pay rent, buy groceries or purchase gasoline to get to work, because they simply cannot do all three.
“At Food Lion, we believe no one should have to choose between dinner and paying rent or gasoline and buying groceries. That’s why we’re so passionate about our renewed focus on ending hunger and working to make the lines shorter at local feeding agencies through Food Lion Feeds.”
More information about Food Lion Feeds is available at www.foodlion.com/feeds . Follow the week’s activities on Twitter @FoodLion or @FoodLionNews using the hashtag #FoodLionFeeds, or on Food Lion’s Lion’s Tale blog.

SALISBURY — Food Lion today pledged to donate 500 million meals to families in need by the end of 2020... read more