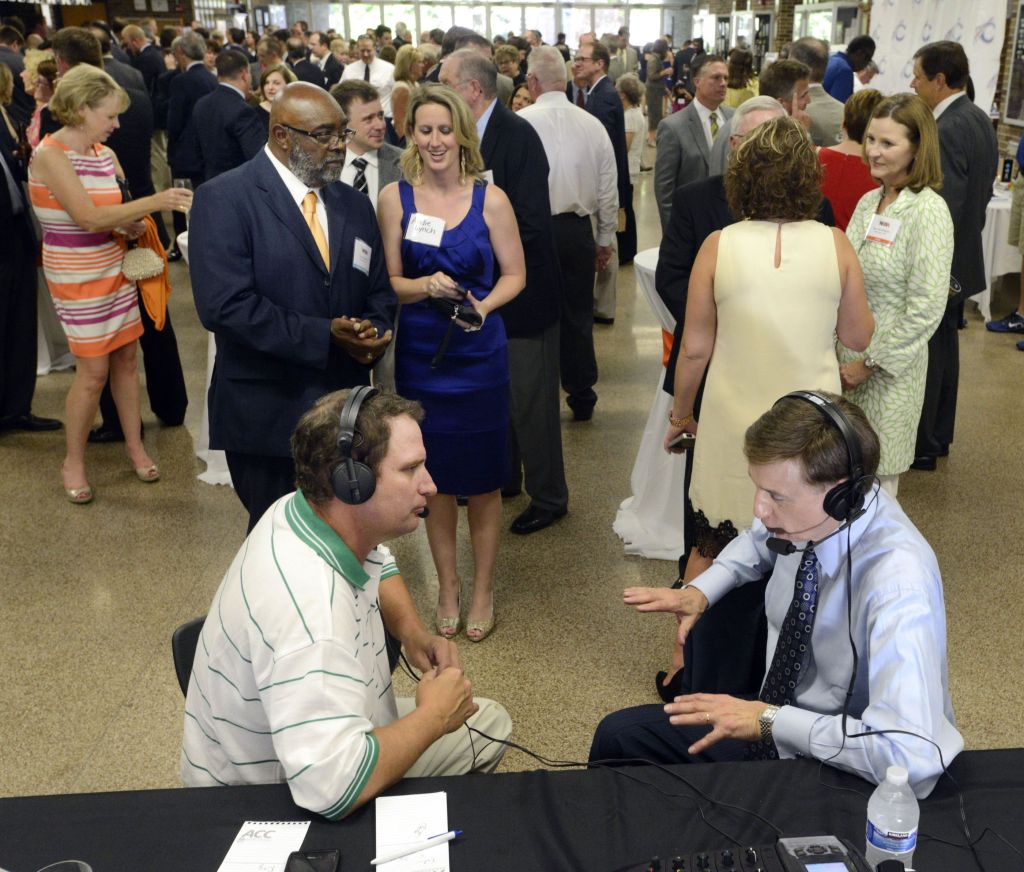 SALISBURY — No one has to remind Marv Albert just how lucky he is.
The 2013 NSSA Hall of Fame inductee is once again the nation’s brand name for sportscasting excellence — even if getting there wasn’t easy.
“When I think about where I started and everything’s that happened…” Albert said with a thoughtful pause Monday night outside bustling Goodman Gymnasium. “It’s such an honor to be standing here, especially when you consider all the greats who have made it to the Hall of Fame. Growing up, it’s all I ever wanted to do from third grade on. Who would have ever thought it would reach this point?”
Albert’s odometer is about to hit age 73, but his story remains an inspiring one. It can be traced to his 10th birthday when his parents gave him a Wollensak tape recorder — a bulky-yet-wonderful device that planted enough seeds to yield a lifetime harvest.
“That was the start,” he recalled with a warm smile. “I would turn down the audio on our television set and broadcast the games myself. Later I’d bring the thing to my high school games and sit in the stands, doing the games with all these people around me.”
Albert’s signature “Yesss!” call was actually borrowed from a teenaged friend. “When we played in the schoolyards in New York, a friend of mine would always call play-by-play,” he remembered. “It wasn’t me. I was kind of shy. He would incorporate, ‘Yesss! And it counts!” which a referee named Sid Borgia used to say. And it just came out one day when I doing a Knick game. Dick Barnett hit a jumper and I said, ‘Yesss!’ Well, people started repeating it to me and it just caught on.”
Those innocent beginnings led Albert down a star-spangled path. He’s been the voice of the New York Knicks and Rangers, has called six Super Bowls, two World Series and numerous other marquee events. He currently calls NFL games for CBS and serves as TNT’s lead NBA announcer.
“Just to do the Knicks, Rangers and NFL Giants would have been enough for me,” he noted. “That was my dream. I never thought of working for the networks, but then NBC came calling.”
Along the way Albert has filled a scrapbook with colorful memories and accumulated more front-row friends than he can count. He speaks fondly of the rivalry between NBA legends Kareem Abdul-Jabar and Willis Reed; is forever grateful to late-night TV host David Letterman for giving the ‘Albert Achievement Awards’ a home; and has a warm place in his heart for the honorable Michael Jordan.
He considers heavyweight Muhamad Ali and Jordan the most media-friendly athletes he’s known. “Everything Jordan said was good for TV and the NBA,” Albert said. “It was all stuff you could use. And Ali — he was always cooperative and good with people.”
A favorite recollection? Albert is quick mention Game 7 of the 1970 Knicks-Lakers championship series. Reed had injured his right hip in Game 5 and was chained to the New York bench as Los Angeles evened the series in Game 6. It seemed unlikely he’d be available to play in the finale at Madison Square Garden and was in the trainer’s room receiving a shot of cortisone as his teammates jogged out for warmups. Suddenly a buzz cascaded through the air as Reed, the league’s MVP, appeared in the runway — prompting a thunderous ovation from the shell-shocked crowd.
“Here comes Willis!” Albert announced to the radio-listening world.
It stunned everyone, including the Lakers. They reportedly stopped warming up and watched Reed hobble onto the court. “They couldn’t believe it,” Albert said. “And then Willis went out and hit his first two shots and the place went crazy. It was such an emotional lift. Walt ‘Clyde’ Frazier had one of the best Game 7’s in history (36 points, 19 assists) and the Knicks won their first title.”
Albert made headlines for all the wrong reasons in 1997 when he was arrested and later convicted of misdemeanor assault and battery. It cost him his job at NBC — and he easily could have vanished into the endless cornfield of forgotten sportscasters. Instead he made a public apology, paid his dues and began winning over skeptics.
“When they asked me to step in for Marv,” said longtime friend Bob Costas, Albert’s replacement, “I said I would certainly do it because I love the NBA and working for NBC. But I told them when he’s ready to come back I would 100 percent be willing to step aside. It was his job and he was great at it. And that’s exactly what happened.”
Away from the limelight Albert lives what seems an ordinary life. “He spends all day reading the newspapers,” said his wife of 15 years, Heather. “We get like five or six of them. He reads everything. His favorite is the comics — Pearls Before Swine.”
It’s good to see that Albert has turned the page and begun writing a new chapter. “There’s no question,” he concluded. “I’m honored by all of this. I never expected this would be where it leads to, but I feel like I still have a lot of years to go.”