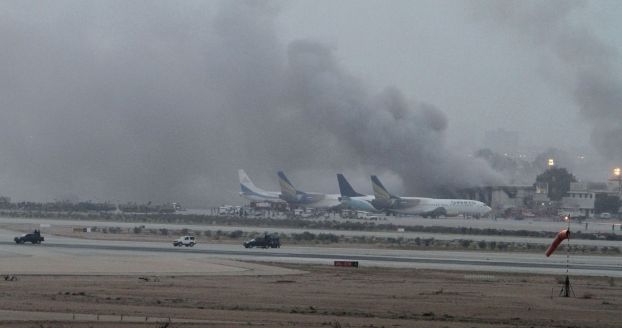 The Associated Press
Your daily look at late-breaking news, upcoming events and the stories that will be talked about today:
1. FRESH ATTACK NEAR PAKISTANI AIRPORT
Gunmen assault a training facility less than 48 hours after a siege of an international terminal in Karachi killed 26 people and 10 militants.
2. UKRAINIAN PHANTOM FIRMS SYPHON BILLIONS OFF
Officials in charge of cleaning the country’s corruption-ridden tax system suspect companies that often existed only on paper of large-scale fraud.
3. CIA IS CRACKING DOWN ON HARASSMENT
An AP probe finds that while the agency is trying to enforce its zero-tolerance policy toward inappropriate workplace behavior, postings on its internal networks challenge those steps as insufficient.
4. MILITANTS SEIZE GOVERNMENT BUILDING IN IRAQ’S SECOND CITY
Insurgents, believed to be affiliated with al-Qaida, overrun the Mosul provincial headquarters in the country’s north, dealing a heavy blow to Baghdad’s efforts to control escalating violence.
5. TRACY MORGAN’S CRASH UNDERLINES PERILS OF TIRED TRUCKERS
Despite the dangers of fatigued driving, the industry and its allies in Congress are poised to roll back safety rules, letting drivers put in as many as 82 hours a week behind the wheel.
6. WHAT HILLARY CLINTON SEES AS ‘MORE OF A REASON TO RUN’
The former Secretary of State says Republican criticism of her handling of the deadly 2012 terrorist attacks in Benghazi emboldens her to seek the 2016 presidential bid.
7. STERLING INTENDS TO FIGHT
The Clippers owner says he no longer wants to sell his team to former Microsoft CEO Steve Ballmer and plans to sue the NBA for $1 billion.
8. SHUNNING SELFIES, SOME SEEK PERFECT PICTURES FOR EVERYDAY LIFE
Professional photographers are now hired not only for weddings and bar mitzvahs, but also for family get-togethers, vacations and outings to local attractions.
9. HOW BRAZIL WELCOMES WORLD CUP VISITORS
Soccer fans arriving in the country may have to fight their way past airport scaffolding, terminal flooding and two-hour taxi lines.
10. WHY THAI BEAUTY QUEEN IS RESIGNING
Weluree Ditsayabut, 22, decided to give up the title after being harshly criticized on social media over her political comments and looks.