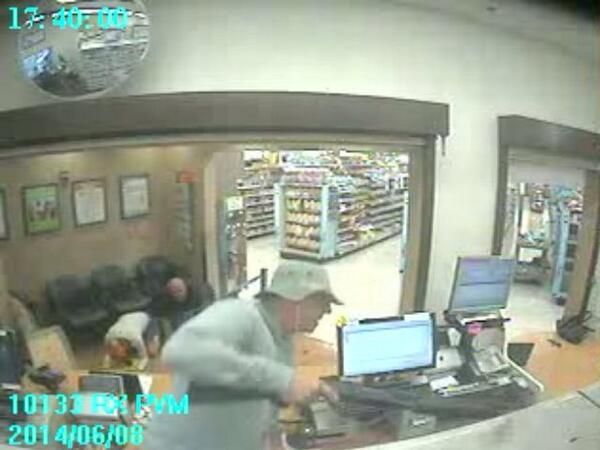 Salisbury Police still need the public’s help in identifying a man who held Walgreens customers and employees at gunpoint Sunday night. The suspect walked into the East Innes Street store wielding a shotgun, jumped over the pharmacy counter and demanded pills.
Officials said the man, described as a white male, over 6 feet tall, 230 to 240 pounds, walked through the main entrance and straight to the back of the store where the pharmacy was located. He was wearing camouflage pants, gray long sleeved shirt and a military-style boonie hat.
He led a pharmacist to a safe where he grabbed a number of pills that included xanax and oxycodone, said Police Capt. Shelia Lingle.
There were eight people in the store including employees and customers. No one was hurt, however many of the customers were shaken. At least one customer was treated at the scene for breathing problems.
When the armed robber walked into the store there were two customers — a man and a woman, sitting in chairs, who were forced to the ground. Another customer standing at the checkout counter was shown in a surveillance video. The customer did not immediately get on the ground, Lingle said. It’s possible the customer was in disbelief the store was being robbed. The customer was shown in the video also being forced to the ground.
Lingle said store staff are working to create an inventory of the types of pills and the amount taken. She said it’s not clear at this point how many pills were taken. No money was taken from the store.
The employees did move customers to a secured room so the suspect could not re-enter, officials said.
Lingle said staff and customers said they did not recognize the robber, but police are hoping someone does.
Anyone with information regarding the identity of the suspect is asked to contact the Salisbury Police at 704-638-5333 or Crime Stoppers at 1-866-639-5245.