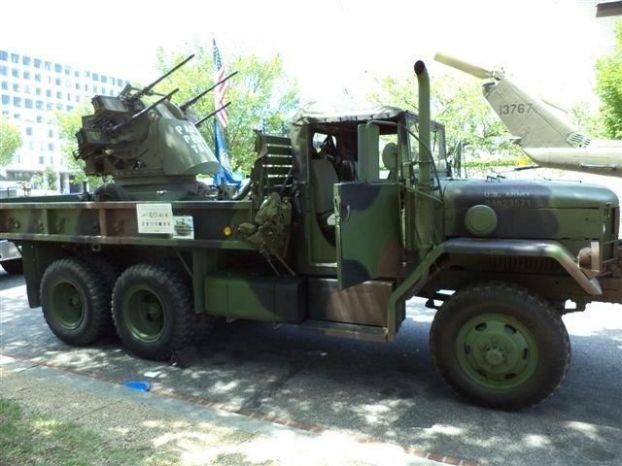 Bobby Harrison didn’t serve in the military, but he has great respect for those who did. Harrison helps out at the Price of Freedom Museum all year and has become very comfortable talking about his Vietnam-era military vehicle.
His vehicle came fitted with a giant searchlight with 150 million candlepower, an object of curiosity for nearly everyone who sees it, especially the hundreds of Rowan County fifth-graders who tour the museum each year.
After retiring in 2007 from the Salisbury Police Department as deputy chief, Harrison spends a lot of time checking auctions and going to gun shows. He spoke to a vendor at the Greensboro Gun Show in 2008, saw a picture and then mentioned to his wife the possibility of buying the vehicle. After some haggling, the 1967 Ford came home to the farm that Harrison shares with his brother Gary.
There is even a national reunion for those interested in searchlight vehicles, along with other specialized military equipment named dusters and quads. This year’s reunion of the National Dusters, Quads, Searchlights Association was set to coincide with the Memorial Day Parade in Washington, D.C. Harrison read about the reunion and called to see if they might be interested in seeing his vehicle. Paul Kopsick, historian and reunion director for the organization, was glad to hear from Harrison and invited him and his wife, Rhonda, to attend the reunion and be in the parade. Kopsick offered to help with the expenses of the trip and ask Harrison to consider it. Harrison didn’t have to think long before replying, “Consider it? I would be honored to attend!”
g g g
Plans came together quickly for the Harrisons to head for Washington on May 25. They loaded the vehicle on an enclosed trailer and headed north, with Harrison quickly realizing the truck and trailer he was using was going to burn a lot of fuel and the trip would be more expensive than he planned.
After arriving at the reunion hotel near Reagan Airport, Harrison told the group he was not a veteran but that he had a real interest in historical military equipment. The folks make him feel at home right away and Harrison quickly began absorbing facts about the searchlight vehicles. These were a part of the 29th Artillery Unit and used for air defense. So were the “quads,” trucks with four .50-caliber machine guns, and the “dusters,” small tanks mounted with twin .40-caliber cannons.
Harrison was mostly interested in how the searchlight vehicle was used. In World War II, the searchlight was used to look for enemy aircraft while the dusters and quads worked to shoot them down. The unit was deactivated following World War II, but was then reactivated for use in Vietnam in 1966.
“There was no real aircraft threat then from the North Vietnamese, so the quads, dusters and searchlight jeeps were used around the perimeters of air bases,” Harrison said. “The bright lights of the jeep, complete with nighttime infrared capabilities, looked for attacking waves of enemy soldiers. Often the jeeps were surrounded by sandbags.”
The 29th Artillery Unit was deactivated for good in 1972. The gathering in Washington was their 32nd annual reunion, and it coincided with “Operation Welcome Home Veterans.” With a total membership of 490, more than 200 National Dusters, Quads, Searchlights Association members attended.
The Memorial Day Parade on May 26 was the group highlight for the weekend. The Harrisons drove their vehicle in the parade. On the May 27, the association chartered buses to tour the Marine Corps Museum at Quantico and the Virginia Museum of Military Vehicles. A South Vietnamese contingent was on hand at the Museum of Military Vehicles to provide entertainment and food for the association members.
“It was their way of giving thanks to the veterans in our group,” Harrison said. “The entertainment was great, especially a Vietnamese woman who did a wonderful impression of Patsy Cline.”
Most of the association members had not seen a searchlight vehicle since Vietnam. There were only about 500 made, and many were buried in trenches in Vietnam.
“I only know of about five that still remain,” Harrison said. “The members inquired if mine was for sale, and I told them that it was not, even though I knew the association is looking for one.”
After the group returned to the hotel that night, Harrison announced that he was going to light up the searchlight at 9 p.m.
“My wife cautioned me about doing that, especially close to an airport. I wasn’t going to leave it on for long, but I wanted to show what it would do,” he said. “I turned the light on for about 30 seconds, shining straight up in the air. There was so much ambient light that it wasn’t as impressive as I had hoped, but I pointed it at a construction crane many blocks away. The crane looked like it was bathed in daylight. Everybody cheered and clapped, so I shut it down, loaded it on the trailer and closed the doors. I backed it up to the wall like nothing had happened. Nobody ever came by. That was fun.”

g g g
The real highlight of his trip took a little longer. Harrison wanted a print of a searchlight vehicle surrounded by sandbags at a Vietnam airfield. Painted by James Shuman of Nebraska, it was No. 1 in a limited edition run of 100. The print was up for silent auction, but the Harrisons had to leave for home before the winners were announced. Harrison left a bid of $400, and Kopsick assured him that he would win the print.
Harrison didn’t hear from Kopsick until two days later.
“I thought about calling him, but knew he was busy with the reunion,” he said. “Finally, he called and told me that the print went for $1,001. I couldn’t believe I didn’t get it.”
However, Kopsick had more to the story. He told Harrison, “Yes, it went for $1,001. But the print is yours. The members wanted to thank you for bringing the jeep and they all chipped in by donating amounts from $25 on up. You asked for no payment or expenses. We wanted you to have it!”
Shuman, who rode in the Harrisons’ vehicle during the parade, donated several more prints to the association.
Kopsick will bring the print along when he visits his family in Kannapolis in July. Harrison has invited him to see the Price of Freedom Museum. The Harrisons won’t go to Colorado Springs for the next reunion in 2015, but they plan to go to Nashville in 2016. He expects to take the searchlight along, and it doesn’t really matter how much fuel he burns along the way.