Earnhardt pulls away late for 2nd win of season 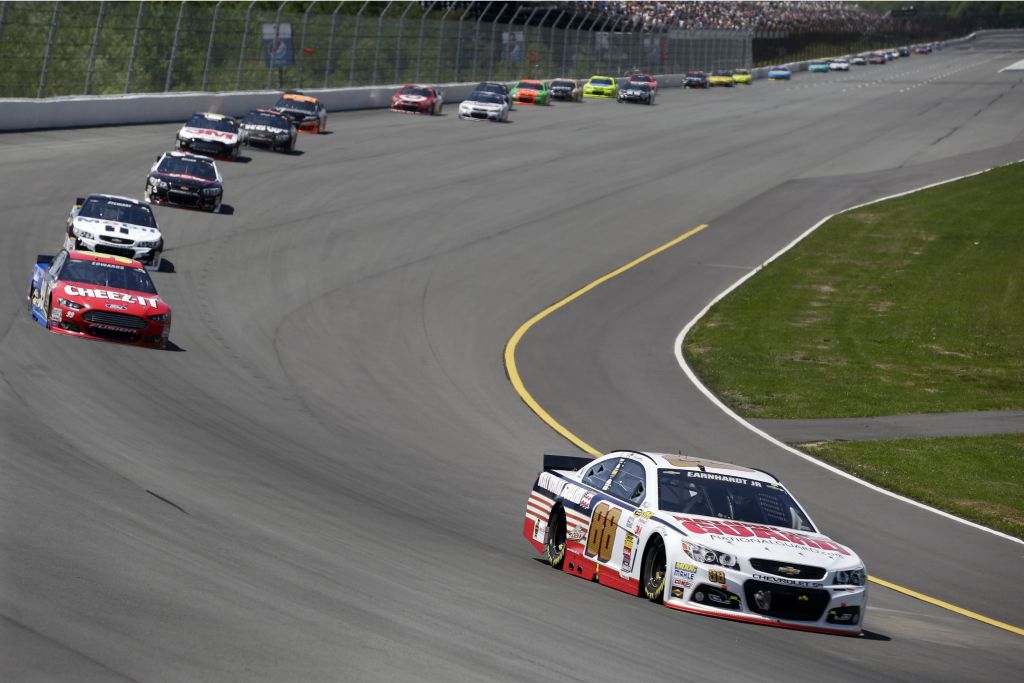 LONG POND, Pa. (AP) — Dale Earnhardt Jr. is having a blast again, with a shared bond with his crew, comfort in his own skin as NASCAR’s most popular driver, even finding fun 140 characters at a time on Twitter.
Winning races sure has a way of easing burdens on Junior.

Earnhardt turned Brad Keselowski’s trash into Victory Lane treasure, pulling away down the stretch Sunday at Pocono Raceway for his second win of the season and a secured spot in the Chase field.

He paired his first career win at Pocono with his Daytona 500 championship for his first multi-win season since 2004.

"I feel like I’m such a lucky guy to have this second opportunity again to be competitive," Earnhardt said.

But for as strong as he ran in the No. 88 Chevrolet, Keselowski gift-wrapped this win when he yielded the lead with five laps left in a desperate attempt to clear debris from his grille and cool his overheated engine.

Keselowski’s gamble backfired — he couldn’t get the draft needed from the lapped traffic to clear his car and make one final pass for the win on Earnhardt. Keselowski’s No. 2 Ford still had the oomph in the engine needed to finish the race, and he had his second-straight runner-up finish.

"It was definitely a mistake because the engine made it," Keselowski said, rubbing his face. "It probably shouldn’t have."

Junior shook off the rising red gauges in the No. 88 that could have had his car meet a similar fate as Keselowski.

"They were still within good reason to stand on it and give it hell," he said.

Owner Rick Hendrick texted Earnhardt before the race to let him know he would not attend and would see him next week at Michigan. Earnhardt told him, "I’ll drink one for you after it’s over."

Earnhardt stuck to his end of the deal, spraying all types of beverages in a jubilant Victory Lane. Johnson was the first driver over to congratulate him.

I don’t have much to do tomorrow," Earnhardt said, grinning. "Tonight’s going to be a long one."

Earnhardt, long NASCAR’s most popular driver, gave the Pocono crowd plenty of reason to go wild. He was mobbed by almost 100 fans outside the Pocono media center, screaming his name and clamoring for a picture with the winner.

He waved and ducked into a waiting car, whisked away for another party.

Maybe the fans should try tweeting at him to earn his attention.

A reluctant participant on Twitter for years, Earnhardt warmed fast to the social media site after winning Daytona. He said he underestimated the amount of fun he’d have interacting with fans. He loved the "go get `ems" that dot his feed, though it’s the "haters" that he really feeds off.

"The real short ones, like, `You suck,’ those are the best ones," he said, smiling. "I just favorite them and block them. It’s so much fun."

Earnhardt’s second win means he is guaranteed to make the Chase for the Sprint Cup championship field. He won for the 29th time in 519 career Sprint Cup starts.

"When we won at Daytona, man, it made the rest of the year a lot more relaxing, a lot easier," he said. "It makes it fun because you can just go to the track and just race, not worry about points."

Junior’s breakthrough was more meaningful because has come in crew chief Steve Letarte’s final season. Letarte, who had a Pocono win with Gordon, has become one of Earnhardt’s best friends. That tightness off the track just may have sparked the wins on the track.

Johnson’s bid for a third straight victory was derailed when he connected on pit road with Marcos Ambrose. Coming off wins in the Coca-Cola 600 and at Dover, Johnson was fifth when he pitted under yellow. Johnson hit Ambrose and spun 180-degrees, which forced him to back into his stall for more repairs. He needed two tires, had right-front damage and dropped to 29th on the restart.

Busch posted his first top 10 since his win at Martinsville nine races ago. He salvaged a rough day for his team that saw fellow Stewart-Haas Racing drivers Tony Stewart and Kevin Harvick drop from contention with various issues. Stewart held the lead and was in great position late to win until he was busted for speeding on pit road and was dropped to 31st. Harvick was running second when had tire trouble.

Stewart finished 13th, Harvick 14th, and SHR’s Danica Patrick was 37th after she smacked the wall with 22 laps left.

All those mishaps — and one loose wrapper — all made it a race to remember for Earnhardt.

"A year or two ago, we weren’t running to seize the opportunity," Earnhardt said, "and now we are."