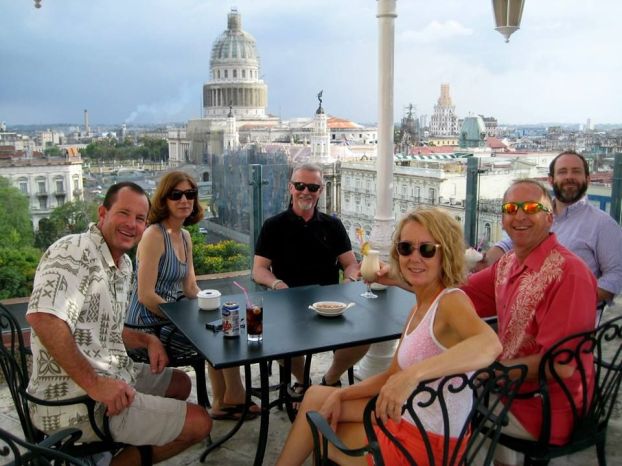 Ed and Susan Norvell have traveled extensively in the Caribbean with her parents, the late D.C. and Frances Linn. But the Norvells had never seen Cuba. Ed’s parents visited Cuba frequently in the 1940s and ’50s. When the opportunity to go with Historic Salisbury Foundation arose, Ed, Susan and daughter Mary Linn signed on.
“The only way Americans can get there is through humanitarian efforts,” says Ed, who adds that the trip was co-sponsored by People to People. “We wanted to see Cuba before it opened up.”
Ed guesses that will happen when the Castro regime ends.
“Havana used to be a beautiful city,” Ed says, “but it’s just frozen in time from 1959.”
That’s the year the Cuban Revolution began. Havana was wealthy and prosperous, but Fidel Castro and his communist government seized all the properties. Ed says they saw mansion after mansion — homes the size of the Wallace mansion — that are crumbling.
There has been restoration in Old Havana, Ed says. “Old Havana was really beautiful. It’s gonna be wide open once it opens up. The beaches are fabulous. Havana will be a perfect cruise ship town.”
The Norvells saw many empty docks and empty harbors during their visit. It was hard to believe that Miami was only a 45-minute plane ride away.
Old Havana reminded the Norvells of the French Quarter in New Orleans. They stayed at a five-star hotel, and met travelers from all over the world. They felt safe walking at night.
“There were no guns, no drugs, no gangs — just poverty,” Ed says. “We saw lots of people begging.”
Still, he says, Cuba has a decent tourist infrastructure. He found the morning lectures on architecture fascinating. Because they were there on May 1, the May Day celebration, some in the group chose to march by Raul Castro’s home.
Before the embargo, America had a strong relationship with Cuba. Writer Ernest Hemingway had a house there, which is now a tourist destination.
For the humanitarian portion of their trip, the group took suitcases full of supplies and over-the-counter medications to a nursing home, which they found to be in good order. Even though some buildings are crumbling, they found parks neat and clean.
Because of the embargo, Americans cannot use cellphones or credit cards. They could purchase books, art and clothing, but no rum or cigars. The Norvells visited the University of Havana’s library and found card catalogs instead of computers.
Ed found a country full of dichotomies.
“They do have an educated public,” he says, “but there’s no business or industry. There’s no money to invest. It’s just another world. It’s like stepping back in time.”