Local businesses step up to furnish home for disabled veteran 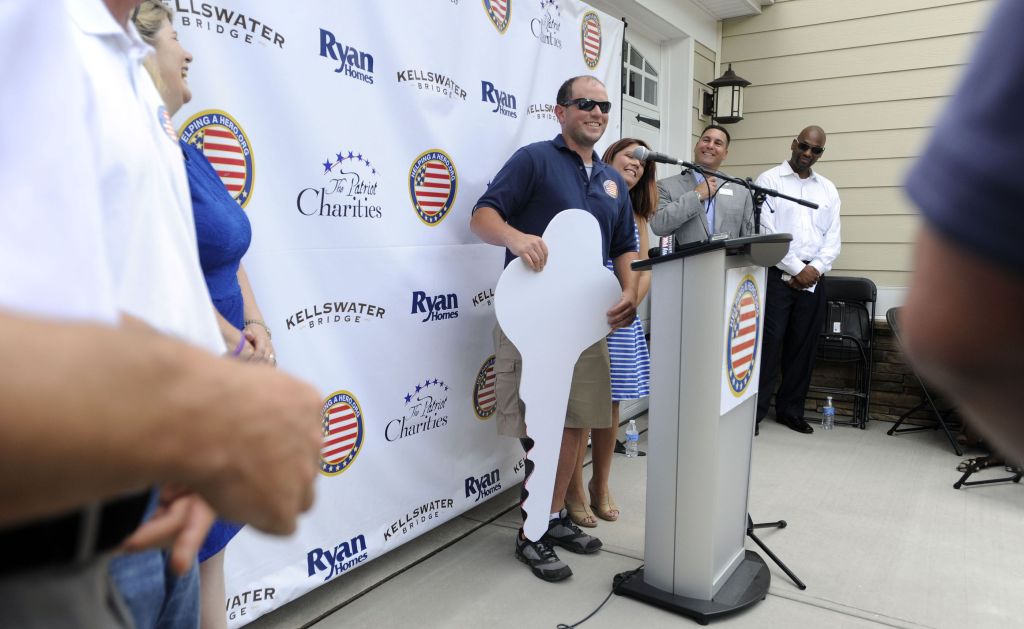 KANNAPOLIS — Thanks to area businesses that contributed more than $25,000 in donated and discounted merchandise, Sgt. Andrew Mullee and his wife Jennifer walked into their new home Thursday and found it fully furnished.
Meredith Iler, volunteer national chairwoman for Helping A Hero, which coordinates new, handicap-accessible homes for severely wounded veterans, flew from Houston to Charlotte on Tuesday. On Wednesday, the day before the welcome home ceremony where the Mullees received the keys to their new home in Kellswater Bridge, Iler began knocking on doors at Kannapolis and Concord businesses.
She was not disappointed. Arriving with a $10,000 budget for furniture and accessories, Iler was able to more than double it with donations and discounts.
“It was amazing,” she said.
Rooms to Go had already committed to providing much of the furniture for the home at a discount. But Helping A Hero and The Patriot Charities of Charlotte hoped the Mullees would want for nothing when they walked into their home, constructed by Ryan Homes on a lot donated by Kellswater Bridge.
That meant finding lamps, mirrors, plants, artwork, linens, dishes, appliances and more.
At Rug & Home in Kannapolis, Iler said she was met with enthusiastic support from store manager Todd Dorrell, who donated more than $6,000 in furniture and accessories, including the rug under the Mullees’ new dining room table as part of the company’s 52 Weeks of Giving program.
The man cave, which occupies the second floor of the home and could more appropriately be called the man loft, was still bare. Iler wanted a fabulous piece of furniture waiting for Mullee when he climbed the stairs with his prosthetic leg for the first time.
Rug & Home came through with a leather sectional sofa.
“The owners of Rug and Home are strong believers in giving back to the community and are pleased to extend a hand to this family through Helping A Hero,” Dorrell said. “We wish Drew and his family happiness and well wishes for this new phase in their lives.”
Iler headed over to Sears at Carolina Mall, where she worked with a manager who gave Helping A Hero additional discounts for dishes, cookware and appliances like a four-slice toaster, the only item Mullee had hoped was in the house, his wife said. Plaza Appliance Mart and an area church joined forces to provide a new front-loading washer and dryer, which Mullee can use when in his wheelchair.
Bed Bath and Beyond and Kirklands gave steep discounts on bedding, towels and more.
The list goes on and on. A team of local volunteers from The Patriot Charities worked for several weeks lining up donations and supplies for the welcome home ceremony. Food Lion gave a $500 gift card so the Mullees can stock their pantry. Harris Teeter and 521 BBQ provided all the food for the party.
As appliances and furniture and boxes were delivered to the new home Wednesday, neighbors unpacked them, Iler said. Most had never met the Mullees.
On Thursday, the same people turned out to wave flags and welcome home a hero.
Iler said because Mullee’s home is the first Helping a Hero house in the Charlotte area, there was no blueprint for working with local businesses. Now, with a second home ready to break ground in Concord, Iler said her organization and The Patriot Charities have formed relationships with many owners and managers they can call upon again.
The next home recipient is SPC Tyler Jeffries, a double amputee whose mother helped solicit donations for the Mullees’ house.
“The first one is really laying the groundwork to help Tyler and other wounded warriors,” Iler said.
Furnishing a specially adapted home for a disabled veteran involves more than just finding companies willing to donate or sell at a discount, Iler said. It’s also about raising awareness and empowering the local business community, she said.
“I never want to rob the community of the opportunity to participate,” Iler said.
While she possibly could have obtained appliances from Sears’ headquarters in Chicago, it’s more meaningful and better preparation for the next Helping a Hero home to use the local Sears, Iler said.
Businesses that did not participate in furnishing the Mullees’ home soon will have another chance.
“Tyler’s is coming up, and anyone who missed out, we’d love to have them help us,” Iler said.
She hopes Jeffries will receive his keys by Valentine’s Day and walk into another fully furnished home.
To learn more about donating or discounting furniture, appliances and accessories for Helping a Hero or to contact Iler, visit www.helpingahero.org.
Contact reporter Emily Ford at 704-797-4264.