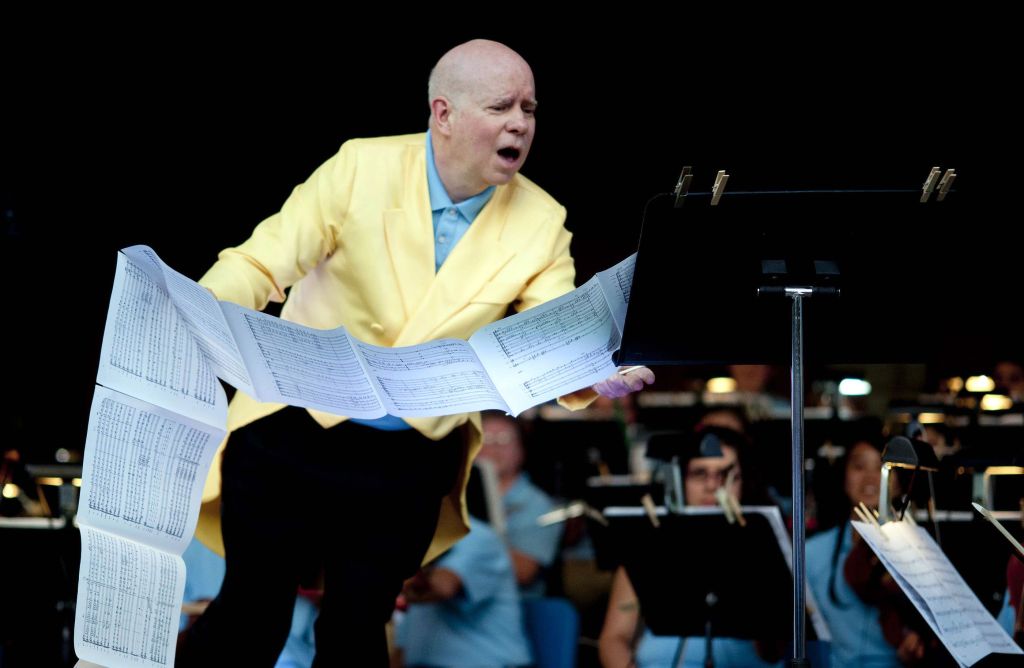 SALISBURY — If you’re like many Rowan County residents, an evening at the symphony might not be your usual Saturday night “thing to do.”

But about this time every year, thousands of locals descend on the parking lot by the Salisbury Post offices and the former First Bank on Church Street.

Many of them come armed with picnics that range from the quick-and-easy to the absolutely decadent.

All come to enjoy music that ranges from popular to patriotic — a mix of old favorites and new.

The 10th annual Salisbury Symphony Pops at the Post concert drew an audience estimated at between 3,000 and 3,500, according to organizers.

Some favorite moments from the past were on display, including Leonard Bernstein’s overture to the operetta “Candide.”

During that number, Salisbury Symphony conductor David Hagy swung back and forth on a spring-loaded platform, being handed different props from an unseen source beneath his platform.

Among the props were a handkerchief, a red Solo cup and a riding crop.

Stagehand Monika Bigsby, of Piedmont Players Theatre, helped create the effect. It’s a callback to the theater company’s 2002 performance of “Candide,” she said.

“It’s fun, it’s real fun,” Bigsby said of the “Candide” gag, which she said has been revived “every couple of years.”

The best part, Bigsby said, is just being outside — “just to hear the music echoing out into the universe, I guess. It’s an excellent audience, a lot of people who wouldn’t ordinarily get to hear a symphony concert.”

In honor of the National Sportscasters and Sportswriters Association awards weekend, being held this weekend in Salisbury, there was a special salute to music from sporting movies such as “Rocky,” “Hoosiers” and “Chariots of Fire.”

And, after a brief intermission, the orchestra presented a unique piece that was part performance and part comedy skit.

Called “Adventures in Music Appreciation,” it was a performance of the opening of Beethoven’s Fifth Symphony … with commentary by Mick Mixon, voice of the Carolina Panthers radio network, and David Jackson, play-by-play announcer for the Appalachian State Mountaineers.

Salisbury Mayor Paul Woodson, dressed in a referee’s striped shirt, took over “conducting” the orchestra briefly after throwing a penalty flag on Hagy at one point.

Afterward, Mixon said the city and event organizers had contacted the NSSA to try to build a bridge between the two events happening Saturday.

There was a sports theme elsewhere, especially in the tailgating section.

Hen Henderlite and Shari Graham turned their tent into a baseball park, complete with a rug under the canopy with “bases.”

Their baseball-themed tailgate party won them a prize in the tailgating contest held at Saturday’s concert.

“It’s fun. We love doing it,” Graham said. They’ve been tailgating at Pops at the Post for about four years, she said.

“We tried hit a home run, you know,” Graham said, pointing out iced cookies frosted to look like baseballs, as well as baseball themed cupcakes and more.

For friends Carrie Poole, Ann McCubbin and Rachel Ross of Salisbury, Pops at the Post is an annual tradition.

With cheese, “meat on a stick” and other treats, McCubbin said they always try to put on a good spread for the symphony show.

“For me,” Poole said, “it is enjoying so many friends and such great music, in such a great environment.”

Poole also said she felt the concert draws together people from throughout the city who might not otherwise interact.

And Ross said that it was great to have such an event in Salisbury, where people from around the city and county can benefit. “We’re very lucky to have this,” Ross said.