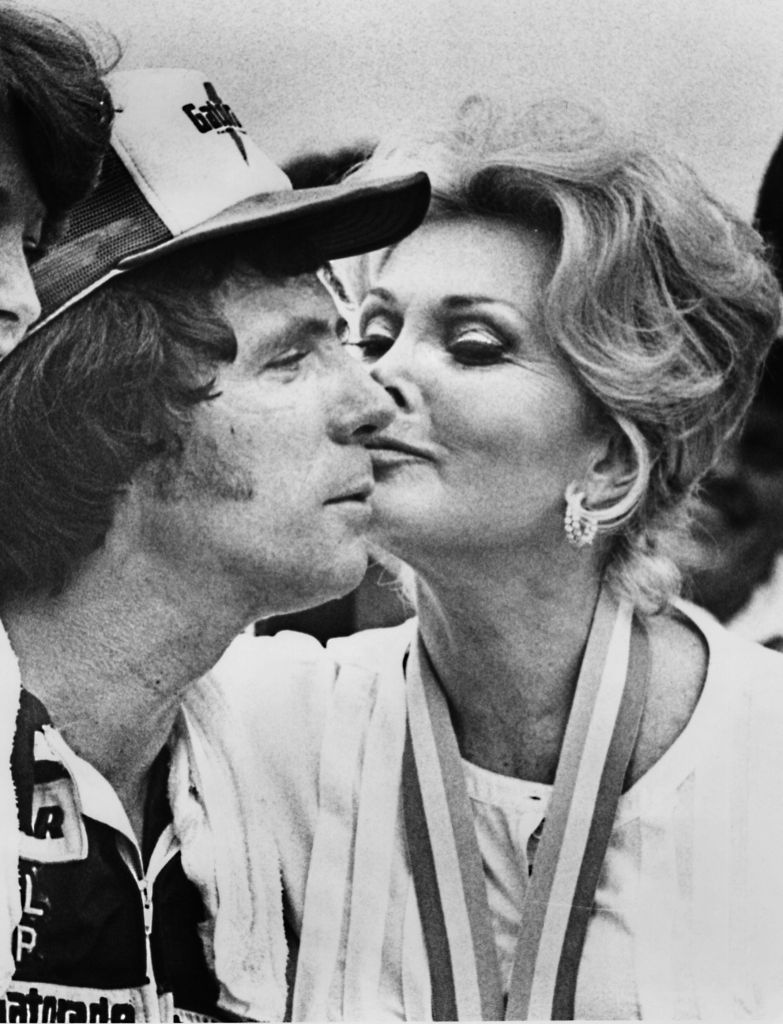 Tri-X film has a birthday. What? Who cares? Maybe not many. What is Tri-X film anyway? Will anyone dare to waste their time reading this column?
For those of you who are still with me, Tri-X film is the greatest black and white film that the photojournalists of the world ever used. It has been called “an artifact, a practice, an art form” that cannot be matched by digital photography. The film image has a different, less perfect look. It was the black and white film that we used at the Salisbury Post until we moved on to shooting all color negative film. It was the perfect look for the “Bean Shooter Man,” Rufus Hussey, taking aim with his slingshot.
It is the one film that has defined many “cultural moments” in our lifetime just by the way our photo images looked and are burned into our minds’ memories. My own photo of Zsa Zsa Gabor giving race car driver Darrell Waltrip a kiss on the cheek could be one of those cultural moments. He has the long shaggy hair and sideburns of the 1970s. Agriculture Commissioner Jim Graham, sitting in a convertible wearing his hat and puffing a cigar, could also be defined as a cultural moment from a by-gone era. The film qualities fit the culture of the time when the photo was taken.
Powerful photos from the Civil Rights era, the Vietnam War, or even our great rock’n’roll music stars were made on Tri-X film.
Remember the “British Invasion” of the Beatles arriving in New York? Tri-X film was there to record the moment. Remember the photos of the police dogs attacking marchers in Civil Rights protests or the fire hoses turned on marchers? Tri-X was there.
Remember President John Kennedy’s funeral with little John Kennedy saluting his daddy’s casket? Tri-X was there.
My photo from the Outlaw Motorcycle veteran’s burial in a pouring rain storm is a powerful local one where the qualities of the Tri-X film actually added to the emotion of the event.
Tri-X film affected how we saw these events and what we saw in the events. The trusted black-and-white film is 60 years old this year and is still being manufactured. Appearing first in 1940 as sheet film for the big 4-by-5 large format cameras of the era, until 1954 when it was released as roll film and 35 mm film. Photographers rode the “back of Tri-X film” through the “Golden Age” of black-and-white photography on into the 1980s.
This new film created an “urgent style” and look that newspapers like the Salisbury Post and magazines were eager to use to capture images. Examples are Sen. Al Gore on a campaign tour at the Statesville Airport or Jessie Jackson and Sen. Joe Biden in a presidential debate.
At the time, Tri-X was considered a very fast film with an ASA 400 speed. Instead of ASA, we now call that measurement ISO but the higher the number the more sensitivity the film is to light. With high sensitivity to light comes “grain” as part of the image.
The film was flexible and forgiving if your exposure was not perfect. You could “push process” the film to ASA 800 or 1,000 for photos in low light such as sporting events and the theater. It was a great film to photograph Andy Griffin and Bob Hope at the National Sportswriters and Sportscasters Awards ceremony. The qualities of the film added to the image of Pat Boone singing under the lone spotlight.
Tri-X was grainy, contrasty, had good dark black tones that added drama to the photos, but kept the details in the shadows and highlights much like the tones of my own photo of Elizabeth Dole at the White House with President Ronald Reagan. Some say the tones were “steely” and not warm. Some say Tri-X was a “dirty film” always looking hard and never producing flat images like the photo of the MLK Parade marchers singing “We Shall Overcome.” It provided the more real, hard look of the ’50s and ’60s photographs.
Photographer Anton Corbijn said, “Grain is life. There’s all this striving for perfection with digital stuff. Striving is fine, but getting there is not great. I want a sense of the human, and that is what breathes life into picture. For me, imperfection is perfection.” Again the motorcycle gang member burial is an example of grain giving the photos added life and imperfection.
With a Nikon camera and a few rolls of Tri-X film and maybe a darkroom, you were ready to take on the world of photography.
You were ready to produce images with urgency, contrast, grain and drama. You were ready to make images that looked natural and true in black and white.
Seeing the world in the ’60s and ’70s on Tri-X film was like looking at “truth first hand.” It was a time of rebellion, not perfection. It was a time of experimentation, looking for answers.
Some say that “Film is honest and Tri-X is honest.” A photo of folk singer Paul Stookey or a portrait of racing king Richard Petty are truthful images of the true men that they are. One photographer went so far as to say, “A photo on Tri-X film is like being in Heaven.”
It was a time when the old slogan “F8 and be there” applied. F8 was the lens aperture setting where the lens gave the best results and being there speaks for itself. You need to be where the action was to take place. Maybe “F8 and be there” with Tri-X film in your camera was Heaven. Photographing Susan Maxwell planting flowers with her two young children at her side had to be close to Heaven for her at the time.
If you are still with me, thank you for celebrating the life of Tri-X film.
Happy 60th birthday, old friend, Tri-X film!
Wayne Hinshaw is the retired photography chief of the Salisbury Post.