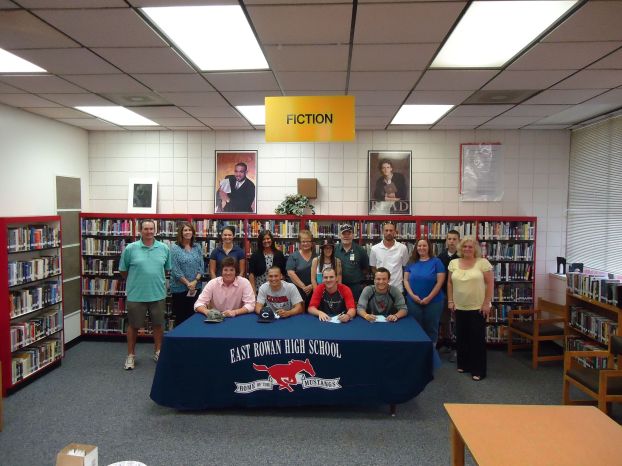 Southern Rowan lost 5-3 to Davidson County on Friday at Holt-Moffitt Field despite some good pitching by Dylan Snider.
Snider struck out four in relief of starter Bo Corriher and put up a lot of zeroes.
“Four errors hurt us,” SR coach Ben Hampton said. “And we missed a lot of opportunities to drive in runs. We had the bases loaded in the eighth and hit into a DP. We just couldn’t get that key hit.”
Down 5-1 after three innings, SR got a run back in the fourth and another in the fifth to climb within 5-3, but that was it.
Chase Labbe had two hits for Southern (3-6), which has lost five of six.
Marcus Shoemaker had three hits for Post 8 (11-5). Austin Stilley had two.
Southern Rowan is home tonight against Rowan County, although it’s another game that won’t count in the league standings. John Daugherty is expected to pitch for Southern.
Southern and Rowan have met 40 times since the SR program began in 1996. See Scoreboard for the history of the series.
Southern starts league play when it takes on Kannapolis at Northwest Cabarrus High on June 10.

Prep golf
West Rowan senior Jake Kennedy, who has signed with Gardner-Webb, competed in the 54th North Carolina Amateur Championship atCarolina Golf Club in Charlotte on Friday.
Kennedy shot 76-76 — 152 and finished 10-over. The cutline for the final two rounds fell at 3-over.
West golfer Coyte Kyles caddied for Kennedy.

Blake Dodge of West Carteret High School and Marquavious Johnson of Knightdale High School have been named winners of the 2014 Athlete of the Year awards by the North Carolina High School Athletic Association.
There will be a tournament at Crescent on June 16-19.
The cost is $100.
Contact Sean in the golf shop for details at 704-647-0025.
The Asheville Tourists scored three runs in the bottom of the eighth inning to beat the Kannapolis Intimidators 6-4 on Friday in Asheville.

Minor leagues
Corey Seager (NW Cabarrus, Kannapolis Legion) hit two homers on Friday for Rancho Cucamonga and drove in four runs.
Seager has 11 homers, 44 RBIs and a .348 batting average and a promotion to Double A can’t be far away.
• Jordan Jankowski (Catawba) had a great start for Corpus Christi, Houston’s Double A team, on Friday. He reached the eighth inning, striking out seven. He allowed three hits and one walk for his first win of the season.
• Justin Seager (NWC, Kannapolis Legion) had two hits Friday for Clinton and is batting .257 with one homer and 11 RBIs.
PHOENIX — Craig Kimbrel got the final four outs to break the Atlanta record for career saves in the Braves’ 5-2 victory over the Arizona Diamondbacks on Friday night.
Kimbrel, with his 16th save of the season (in 18 tries), has 155 for his career, one more than John Smoltz. His 155 saves have come in 172 opportunities.
Jason Hayward drove in three runs, two with a home run, and Andrelton Simmons doubled in a run for the Braves.
Julio Teheran (6-3) gave up two runs and five hits in seven innings to win his fourth straight decision.
Didi Gregorius became the first Diamondback to hit leadoff home runs in consecutive starts. He did it Wednesday in Colorado, sat out Thursday’s game, then did it again Friday.
Arizona’s Brandon McCarthy (1-8) allowed three runs and nine hits in 6 1-3 innings, striking out nine and walking one.

MEMPHIS, Tenn. — Ben Crane shot a 5-under 65 on Friday to open a six-stroke lead in the St. Jude Classic before heavy rain delayed play twice and forced the suspension of play for the day.
Crane birdied his final hole Thursday night for a 63 and rolled in a 44-footer for birdie to start the second round Friday morning. He had a 12-under 128 total at TPC Southwind, matching the winning score in relation to par last year.
Carl Pettersson and Jason Bohn were tied for second at 6 under. Pettersson had one hole left, and Bohn had two to play. Davis Love III (70) and Billy Horschel (68) were in at 5 under.
Phil Mickelson and Retief Goosen were unable to start the second round. Mickelson opened with a 67 on Thursday, and Goosen had a 66.

After a 59-minute delay because of lightning, play resumed for 13 minutes before being stopped again. Fans were sent home and the round was suspended just before 5 p.m.