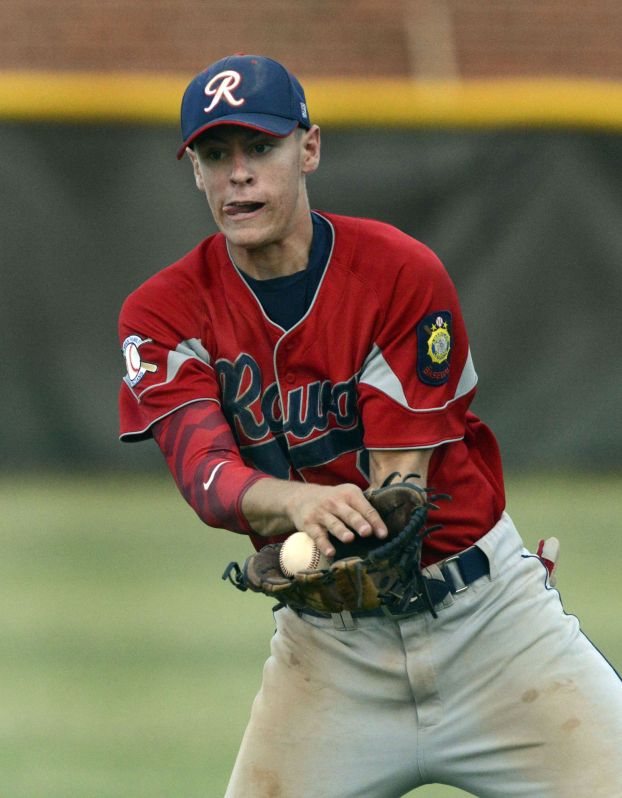 LANDIS — Rowan County’s Luke Setzer circled the bases after hitting a grand slam and was greeted by — total silence.
“Yeah, we congratulated guys for getting on base with singles, and we even congratulated a guy for walking,” Rowan catcher Dustin Ritchie said with a grin. “But nobody said nothin’ to Luke. When you hit a grand slam, you deserve the silent treatment.”
It was classic guys-playing-well-and-having-a-good-time stuff, and Rowan played as well as it has all season in Saturday’s 14-2 romp at Southern Rowan.
“The guys congratulated everybody in the world but me,” Setzer said. “I loved it.”
Rowan (9-3) had 15 hits and no errors, and you’ll win 100 percent of those, even if Connor Johnson doesn’t pitch.
Setzer had four hits and seven — count ‘em, seven — RBIs, as he added two singles and a double.
“We got key hits,” Rowan coach Jim Gantt said. “Two-out hits.”
Leadoff man Harrison Baucom had three hits, and even in a seven-inning game, he batted six times. You’ll also win 100 percent of those.
Heath Mitchem didn’t start and still slapped three hits. He entered the game after Rowan second baseman Michael Caldwell aggravated a wrist injury and had to leave.
Setzer, who had been in right field, took over at second base, a position he manned for the East Rowan jayvees a few years ago.
“Luke’s our best candidate there,” Gantt said. “We hope Caldwell’s not out long.”
Riley Myers, playing third base the last two nights after being limited to DH duties the first 10 games by a balky elbow, had a key hit. Michael Pinkston was used as the DH and also produced two hits.
Chandler Corriher was the only Southern player with two hits, and one of those wasn’t good news. Corriher’s groundball struck baserunner Hunter Travis between second and third in the third inning. While Corriher was awarded a base hit by the rulebook, Travis was out.
Southern (3-7) actually scored first when Chase Labbe doubled to open the second, moved over to third on Dillon Atwell’s groundout and scored on Matt Honeycutt’s single.
But Rowan got the next 14 — two TDs, plus two PATs — starting with a five-run third that decided the game.
Myers drew a bases-loaded walk against Southern starter John Daugherty to put Rowan on the board. Then Setzer’s single put Rowan on top to stay.
Ryan Jones’ sac fly chased Ben Gragg deep to center field before hits by Ritchie and Pinkston made it 5-1.
“It was base hit after base hit for Rowan,” SR coach Ben Hampton said. “Good approaches. They got hits even when they were down 0-2.”
Johnson, 10-0 during the high school season for East and 4-0 this summer, wasn’t all that sharp early.
“He was leaving fastballs up early, and they were hitting them,” Ritchie said. “But then we started mixing in a few breaking balls, and he threw some nasty ones He settled in.”
Johnson allowed eight hits in six innings, but by the end of his outing, he was untouchable. He struck out the last five batters he faced to finish with nine punchouts.
“I wasn’t really going for strikeouts,” Johnson said. “They put the ball in play and they got their hits, but we hit the ball more.”
Rowan’s defense was as good as it’s been, with young shortstop Jeremy Simpson making all kinds of plays.
“He got some tough hops, but he didn’t panic,” Gantt said. “And he made some good charging plays.”
Cory Fries pitched the seventh for Rowan and allowed a run on Eric Stowe’s triple to right-center and Travis’ groundout.
Southern opened with a doubleheader win, but it’s been a struggle since, with seven losses in eight games.
“It was the same old story tonight,” Hampton said. “And it’s about time we stopped making excuses and started making adjustments. We’re not doing anything very well right now, and that’s the bottom line.”
After a long SR postgame chat, Stowe summed it up.
“We hit some balls hard right at people, and they hit balls where we weren’t,” he said. “Everything they hit was between the infielders or fell in front the outfielders.”
•

NOTES: Rowan is home against the Mooresville Moors tonight, while Southern gets a night off. Southern will play at Rowan on Monday in another non-league game. … Southern outfielder Dylan Carpenter singled in the first inning but aggravated a leg injury and was replaced by Jake Fulton. … Eighth-grader Owen White, Southern’s shortstop, had one of the hits off Johnson.