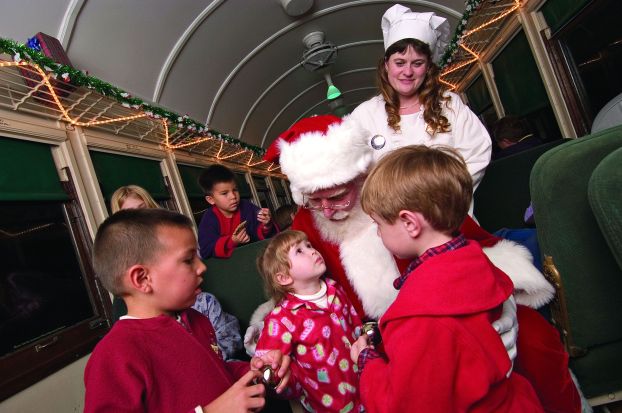 SPENCER — On the heels of one of the its most successful events ever, the N.C. Transportation Museum Foundation will bring a new train experience to Spencer based on the hit book and movie “The Polar Express.”
The Polar Express Train Ride, which immerses children in scenes from the movie during an hour-long train ride, will run from Thanksgiving weekend through Christmas. One of about 35 official Polar Express events in the country and the second in North Carolina, Spencer’s attraction will have the only Polar Express in the United States featuring a roundhouse.
The train experience based on the movie starring Tom Hanks has become such a popular family tradition that 6,000 tickets to an event in Indiana last year sold out in less than 10 minutes, said Kelly Alexander, chief operating officer for the foundation that raises money for the transportation museum.
Warner Brothers iconic train experience will replace the museum’s usual Santa train, Alexander said.
“We see this as long-term,” she said.
Lee Street Theatre in Salisbury will serve as the production company, providing about 25 actors, lights, sound, special effects and more, artistic director Justin Dionne said.
The event must follow strict guidelines and requirements established by owner Rail Events Inc. in Durango, Col., in partnership with Warner Brothers.
Last week’s four-day Streamliners in Spencer event, which was expected to attract about 6,000 people, sold roughly 9,200 tickets, more than doubling the tickets sold to the Norfolk Southern Heritage event last year. Alexander said Streamliners had perfect weather and extensive media coverage that helped lure area residents to join rail fans who hailed from 41 states and five countries.
Organizers actually ran out of tickets on Saturday and had to repurpose Thursday’s tickets, Alexander said.
“Saturday was over the top,” she said, calling the event a “massive team effort” between the foundation, state-owned museum and Rowan County Convention & Visitors Bureau.
All Rowan County hotels were booked, and visitors stayed in hotels in Concord, Mooresville, High Point and elsewhere. Businesses in Salisbury reported strong sales, said Paula Bohland, interim executive director for Downtown Salisbury Inc.
“We had women coming in and shopping after they left husbands out there,” said Glenda Dyson, owner of Just the Thing. “They said, ‘We can only look at trains for so long.’ ”
Alexander said while her top priority must be generating revenue for the museum, close behind is a second goal of stimulating the local economy. Streamliners at Spencer generated visitor and event spending of more than $1.2 million, with a total economic impact of nearly $1.6 million, according to Convention & Visitors Bureau Executive Director James Meacham.
Museum officials will not know for several weeks how much money Streamliners generated
Alexander said Polar Express could rival Streamliners as a tourist attraction. Organizers plan 44 performances over 17 nights, with about 300 people on each train. The museum and foundation will invest in infrastructure this summer and fall to prepare for the event, she said.
“It will be the full experience, really immersing the audience into the world of the Polar Express movie,” Dionne said. “This thing could be huge.”
Dionne said the project matches Lee Street’s penchant for nontraditional theater.
“This works great for us,” he said. “This is an immersion, almost theme park-style.”
Few performances will be scripted, and the actors will engage in lots of improvised interaction with children and their parents, Dionne said. Just like the movie, chefs will come down the aisle to serve hot chocolate, and every child will leave with a bell. Kids and the young at heart are encouraged to come dressed in their pajamas.
Dionne will be casting the Polar Express as well as the Scrooge Christmas Trolley Tour this fall, and both performances will run through December but only for one year. This marks the final season for the Scrooge attraction, and Dionne is already thinking of another trolley-based performance to replace the show in 2015.
Karen Windate, owner of Turn of the Century Bed and Breakfast, said several potential guests have called inquiring about Scrooge dates so they can book a room.

SALISBURY — Gardening is in full swing, delicious produce is arriving at the markets and questions are pouring into the... read more