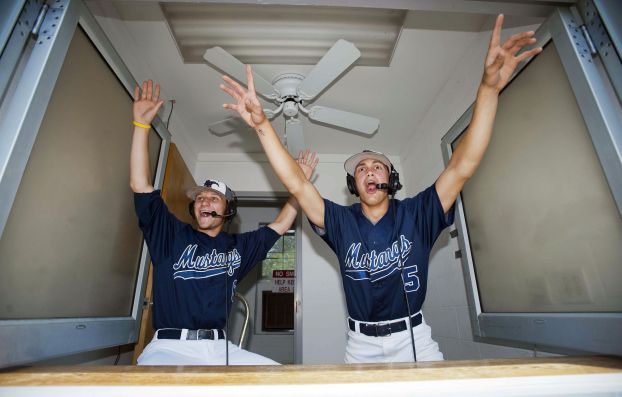 GRANITE QUARRY — East Rowan southpaw Connor Johnson is a Division I pitcher headed to a D-II school (Catawba), but he’s fine with that, and so is coach Brian Hightower.
Hightower said he was reluctant to call Division I coaches during Johnson’s junior year because Johnson was still a little erratic.
“He was throwing 82-83 (mph) last year and didn’t really trust his curveball,” Hightower said. “Even for a lefty, that’s not a Division I guy. But he really worked last offseason. Now he’s 87-88 with the fastball and he’s got a curveball that he not only can throw for a strike — he can put people away with it. That’s a Division I guy.”
When Johnson came out of the gate smoking as a senior, Hightower started lining up coaches to come look at his phenom. He made the calls, told people when Johnson would be on the mound, and under-the-radar left-handers will always perk the interest of college coaches, even late in the recruiting process.
One day, Hightower called Johnson to his office to tell him three D-I coaches were coming to watch his next start, but Johnson had his own news.
“That’s great, Coach, but I committed to Catawba last night,” Johnson said.
Johnson’s commitment was verbal. He could’ve backed out of it, but he chose not to.
“You want to be a man of your word,” Johnson said. “I wanted to play for Coach Gantt because I like his style and I like his work ethic. He’s not light on you. He puts it on you. But that’s what I want. I want to get better.”
Hightower has placed many players with D-I programs — a small army of Mustangs have helped Charlotte and Appalachian State — but he never minds seeing a guy pick Catawba, the school where he played and the school from which he graduated.
“There’s no better coach anywhere than Jim Gantt, and Catawba is a D-II school that could beat some D-Is,” Hightower said. “Connor will have a chance to compete for regional and national championships and play at home. You can’t ask for more than that.”
••••••••
Carson’s Dillon Atwell won the previous two county pitcher of the year awards, and it’s not like he slacked off any. He went 9-2 as a senior.
But Johnson made this year’s pick easy. He was 10-0 and no pitcher in the county has won more than 10 in a season since Daniel Moore won 13 for North in 2000.
Johnson’s 114 strikeouts in 80 innings were historic. He’s the first East pitcher since 2000 to strike out 100, and the Mustangs have rolled out notable hurlers such as Brian Hatley, Julian Sides, Spencer Steedley, Corbin Shive and Bradley Robbins in that span.
Johnson is only the fourth hurler in the county to strike out 100 in a season since 2000. The most recent was Salisbury’s Lee Dupre, who fanned 109 in 2006. South’s Andrew Morgan had back-to-back 100-strikeout seasons in 2002 and 2003. Johnson put up the most strikeouts in the county this season since Moore blew away 174 hitters in 2000.
Johnson’s ERA was 1.14, while pitching in a good league, and he was as sharp as it sounds.
“He didn’t allow a homer, he didn’t allow a triple, and he only allowed seven doubles,” Hightower said. “That means about seven guys squared up balls on him in 80 innings. That’s phenomenal.”
••••••
Johnson will be the fourth to receive the annual Patrick Snider Memorial Award, which has been given since 2011 in memory of North Rowan pitcher Patrick Snider. Snider led the Cavaliers in wins, strikeouts and ERA in 2009, but he died from cancer at 17 in 2010. Snider’s courage is remembered each year through the presentation of this award. Gary Ritchie sponsors the award.
Johnson is a worthy winner. He completed seven of his 12 starts and he also saved two games.
A fine athlete who has the speed to play center field, Johnson wasn’t bad on the bump as a junior, striking out 78 in 62 innings. His ERA was 2.61, but he allowed five homers and 17 extra-base hits and his record was only 5-4.
“That 5-4 is what motivated me as a senior,” Johnson said.
As part of a bet, Johnson started a modest lucky mustache as his senior season got under way and vowed not to shave it until he lost.
“I never had to shave it,” Johnson said with a laugh. “And it grew out a little bit.”
Johnson got his — and East’s season — off on the right foot. Weather was on East’s side. Thanks to a postponement, Johnson got to pitch both of East’s SPC games against Carson in early March.
Johnson struck out 19 and pitched 5-0 and 3-2 victories in those two meetings. Those wins would propel the Mustangs to the SPC championship. Carson was a buzz-saw in April and May, but it was never able to catch up.
Johnson’s last win at East was his best. Weddington had crushed Johnson and the Mustangs in the first round of the 2013 playoffs on its way to the 3A state title.
With a second-round matchup with Weddington looming, Johnson went to scout Weddington’s first-round game with Hibriten personally.
“I wanted to be as prepared for their hitters as I could possibly be,” he said.
He struck out eight in a 2-1 victory and produced three straight punchouts with the bases loaded in the top of the seventh when Weddington had the Mustangs on the ropes.
“That was the highlight of my career,” Johnson said. “Because that team killed us last year.”
Johnson had a good time on his way to 10-0, offering impressions of local broadcasters on the bus rides, but once he stepped on a mound, he was all business, ready to compete.
“His stats were just sick,” Hightower said, “He attacked hitters and stayed under 100 pitches every game. He filled up the strike zone and he dominated.”

Your daily look at late-breaking news, upcoming events and the stories that will be talked about today: 1. WHAT WORLD... read more