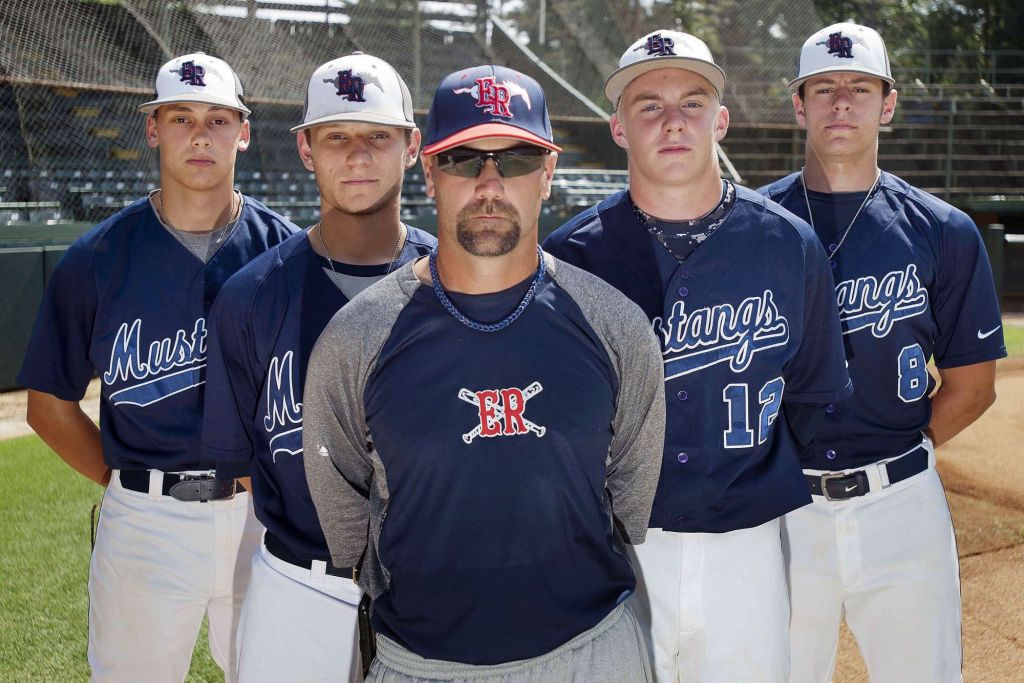 SALISBURY — Brian Hightower accompanied four of his all-county selections to Newman Park Monday, where three of them would play for the Rowan American Legion team that night and the other would jet off to join the South Charlotte Panthers showcase team. East’s year ended a couple weeks ago, but Hightower’s players know improvement is always in season.
This year’s squad didn’t include Division I signees as past years have, but he has a sense of a appreciation for winning, which is what a senior-laden group helped him rediscover after a disappointing 2013.
This was the Alpharetta, Ga., native’s 10th season in Granite Quarry and he’s now got 202 wins there. The math is easy but if you can’t figure it out, and not all sportswriters can, he’s averaged 20 wins a season. This was the best year since East won the state 3A title in 2010. The Mustangs, 22-8, took hold of first place in early March after sweeping Carson. They went 6-1 against county teams. The nonconference schedule was tough with battles against 4A state finalist West Forsyth and heavyweight RJ Reynolds.
But it’s not always been this good for Hightower, 43. There were seven years at Statesville, in a county that has no middle school baseball and a fraction of the tradition Rowan County does, before he got the East job.
“People think all I’ve done is win,” Hightower said while looking out over Newman Park. “I’ve been on the other side of it. I’ve been 2-22.”
Like others in the coaching profession, Hightower lives in a results-based world. That’s part of the reason for East’s resurgence that led to him winning his fifth Rowan Coach of the Year award.
The intensity you see in Hightower transfers to his players.
“He teaches us to play like crazed dogs,” said East senior Luke Setzer. “He’s always bringing the best out in us.”
Even though they were plenty talented, East still utilized unorthodox ways to win this year. There was a squeeze bunt in the second-round playoff game against Weddington. Connor Johnson, normally on the mound, threw a runner out at the plate from center field after a botched pickoff attempt at second base and came back after trailing much of the night in the South Piedmont Conference Championship against rival Carson. And don’t forget hidden ball tricks that have been pulled out from time to time.
“We knew we were never out of a game,” Johnson said.
The Mustangs improved by 10 wins this year and staked their claim as county stalwarts after a rough season that included a first-round playoff exit. Michael Caldwell and Ike Freeman were solid up the middle defensively. Johnson was 10-0 with a 1.14 ERA. Setzer (.349), Freeman (.330), Caldwell (.347), Dustin Ritchie (.355) and Mason Doby (.320) bolstered an experienced lineup.
“I think it was the commitment that happened once we walked off the field after that first-round loss,” Hightower said. “We had a good core group coming back. A lot was on the seniors’ shoulders and they stuck together.”
Hightower played second base at Catawba in the early 90s and saw how the county was a baseball hotbed. He applied for some jobs in Georgia but helped Jim Gantt out at Catawba after graduating. The county’s stayed baseball-crazy in part due to the level of success East has maintained.
“I always wanted to be back in Rowan County because you see the tradition of baseball in this county,” Hightower said. “I felt that when I was playing here at Catawba. East Rowan was a job I tried to get for three years.”
“I would never go back to Atlanta. I love Rowan County, plus my wife’s family is here. I’m going to stay in this area until I die.”