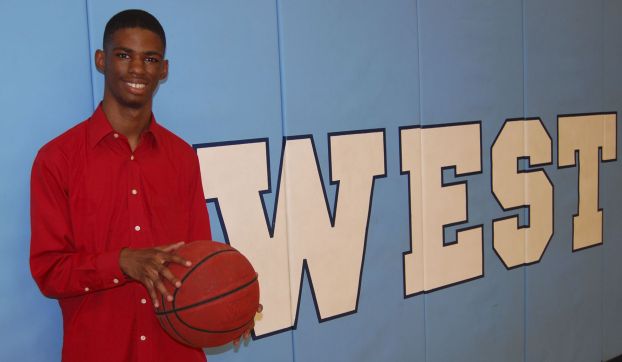 MOUNT ULLA — Jaques Jackson can’t walk down the halls of West Rowan High School without continually being greeted by his classmates. Wherever he goes, he is constantly receiving high-fives and fist bumps.
With his raging popularity, you’d expect Jackson to be a star of the football or basketball team. In a way, he is. Jackson is a part of West Rowan’s football, basketball and track teams, but not in the way one might expect. He’s the team manager and water boy.
Jackson can’t participate in these sports because he has cerebral palsy, a movement disorder that causes one side of his body to be stiffer than the other. “I always try even if people say you can’t do it,” said Jackson.
Jackson is a Cleveland native who lives with his mother, stepfather and two younger sisters. His father is still in the picture, though.
After high school, Jackson plans to continue his education at the University of North Carolina at Charlotte and major in sports management. He hopes to be a sports agent. “I’ve been around sports all my life,” Jackson said. “It’s a motivation to me that I have a disability.”
While Jackson might not be able to participate on the field or court, he does not struggle in the classroom. As a matter of fact, he finds school to be pretty easy.
“I’ve always liked school because I need school to succeed in life,” he said. He explained that his favorite subject has been history because he enjoys learning more things about the past.
Jackson credits his success to his faith, which is very important to him. “Without God, what would I be?” asked Jackson. “Don’t let people say you can’t do something, because you can do anything through God.”
Outside of the classroom, Jackson spends most of his time playing video games or with his friends, who he said “always look out for me and make sure I’m happy.”
Jackson said he hopes to succeed so that he can give back to others.