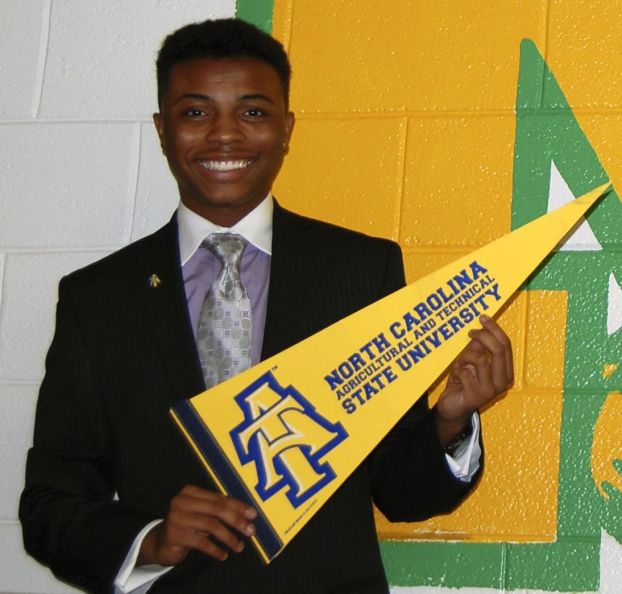 Mentoring made the difference for North student

SPENCER — Not many graduating high school seniors can say they’ve rubbed elbows with entertainer Steve Harvey or platinum recording artist Ne-Yo, but a lucky break on a vacation made that and more a possibility for North Rowan senior Joshua Tillman.
During the summer of 2011, Tillman attended a recording of the Steve Harvey Show while visiting Chicago. During the question-and-answer portion of the show, Tillman asked Harvey about his mentoring camp for young men.
Harvey asked if Tillman planned to attend.
When Tillman responded that he did, Harvey said, “Since you plan on attending, you’re there.”
Harvey’s invitation made it possible for Tillman to not only attend the camp, but also a Father’s Day weekend retreat where men from all over the country spent their Father’s Day mentoring and investing in boys who don’t have fathers.
“Me and my biological father’s relationship was never really healthy,” Tillman said, adding that the program got to him on “an emotional level” as the volunteers worked to “instill those tools of success” in the attendees.
Harvey’s programs opened up the door for Tillman to intern with Operation Hope, a nonprofit organization in Atlanta, and become a 2012 Coca-Cola Pay It Forward Celebrity Apprentice, where he worked with Ne-Yo and his executive director on charity work.
In 2013, Tillman was invited back to camp as a counselor.
Recently, Tillman was asked to take part in a live surprise thank-you presentation to Steve Harvey on the Steve Harvey Show.
Tillman’s life hasn’t been without struggles, though.
He grew up in Atlanta with his mother, but because they weren’t getting along, Tillman moved to Greensboro to live with his biological father and his father’s girlfriend when he was 15.
“It wasn’t an ideal situation,” Tillman said.
In school, he dealt with depression and bullying.
Tillman said things began to turn around when he started looking at different opportunities.
That’s when he found the early college and was accepted as a sophomore — a rarity.
When Tillman’s father and his girlfriend broke up, Tillman and his father were left without a home.
The pair bounced around for three months.
“There were times we had to sleep in the car,” Tillman said, adding that other times they slept in people’s living rooms.
After three months, Tillman said, his father told him he needed to find somewhere else to stay because he couldn’t take care of him anymore.
So, Tillman moved to East Spencer to live with the Wilkersons, close family friends.
It was then he began attending North Rowan High School.
Tillman is now the senior class treasurer, vice president of Future Black Leaders of America and the only student ambassador on North Rowan’s School Improvement Team.
Tillman is also involved in Fellowship of Christian Athletes and ran track his junior year.
Tillman will attend his mother’s alma mater, North Carolina A&T University, in the fall, where he plans to major in secondary history education, as well as journalism and mass communications.
After college, Tillman wants to teach, become a high school principal and eventually open a charter school in the heart of Atlanta.