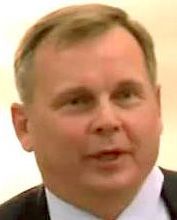 Gray Stone Day School will hold its 10th graduation commencement ceremony on Friday, June 13, at 7 p.m. The ceremony will take place in the gymnasium of Gray Stone Day School, adjacent to Pfeiffer University’s Misenheimer campus. A reception honoring the seniors and their parents will follow.
The commencement speaker for the graduation ceremony will be retired Major General Gary Harrell. The former Delta Force commander retired as a major general from the Army at age 57, ending a career of almost 35 years that took him to every post-Vietnam hot spot, from Grenada to Iraq and Afghanistan.
Harrell helped rescue U.S. hostage Kurt Muse from a Panamanian jail in 1989 and hunt down Colombian drug lord Pablo Escobar. He searched for mobile Iraqi Scud missile launchers in the first Persian Gulf War in 1991, was a commander during the 1993 battle of Mogadishu — immortalized in the book and movie “Black Hawk Down” — and led perhaps the largest special operations force into combat in U.S. history in Iraq.
At least twice, Harrell nearly lost his life serving our nation — in a helicopter crash in Panama that broke his back and in Somalia, when a mortar round detonated within feet of where he stood, severely injuring and nearly severing his leg and inflicting other life-threatening injuries. Except for his strength of mind and body and the medics, Harrell would not have survived. Harrell spent his career dodging the spotlight in the military’s most secretive units, yet he was portrayed by name in two books and a popular movie.
He is a combat leader who displays his soft side whenever his wife, former high school sweetheart, Jennifer, is by his side. Over the years, she accompanied him to tell families that their loved ones would not be coming home. He says he is more proud of being a father and grandfather than he is of retiring as a two-star general. Although Harrell is one of the military’s premier experts in rapid, violent strikes, he is quick to point out that victory against terrorism may lie in education and in patiently helping other countries solve their own problems.
This year will see 87 area graduates complete their high school careers. It is the ninth year seniors have completed a service project as part of their graduation requirements. The students have worked countless hours in their communities helping to implement new programs or to benefit established ones.
Student commencement speakers are Evana Bodiker, John Latimer and Caroline McLeod. Seniors Hope Moua, Tracey Allsbrook and Preston Bowers will welcome guests, present the class gift and introduce the speaker. Seniors Shelby Adams, Mikaela Brown and Sydney Cole will give a musical performance.
Junior marshals are Erin Ansbro, Garrett Barringer, David Cowan, Chris Distin, Taylor Earnhardt, Margaret Ericson, Frankie Goodnight, Reid Huckabee, Julia Jennings, Jonathan Matthews, Dray Smith, Celeste Williams.
Students at Gray Stone Day School will graduate with honors according to their cumulative grade point averages determined after the last day of school. Students with a GPA of 4.30–4.44 will graduate with honors, 4.45–4.59 with high honors, and 4.60 and above with highest honors.