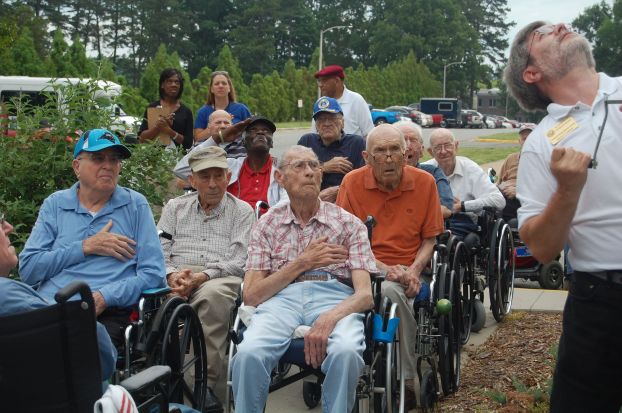 Although August will mark the 50th anniversary of the start of the Vietnam War, veterans and veteran services officers decided it wasn’t too early Thursday to recognize the men and women who served in the war.
About a dozen veterans in wheelchairs gathered around the flagpole outside the state veterans nursing home located near the W.G. Hefner VA Medical Center for a somber service.
The Rev. William “Bill” Ragsdale, the nursing home’s chaplain, joined N.C. Veteran Services Officer Barry Cartner in hoisting up a unique flag commemorating the war’s 50th anniversary underneath the red, white and blue.
“It’s only fitting that we take a little bit of time out of our day just to recall the sacrifices that everyone made during the Vietnam era, especially those who were in country, in Vietnam, Laos and Cambodia,” Cartner said.
The commemorative flag was prepared by the Department of Defense in recognition of the 50th anniversary, Cartner said.
The flag incorporates the Vietnam Service Ribbon, the red, white and blue to symbolize the Americans who fought in the war as well as black and green to symbolize the prisoners of war and those missing in action, Cartner said.
“These gentlemen are just as much a national treasure as anyone who served during Korea or World War II,” Cartner said. “Most of the veterans attending the ceremony served in World War II, Korea or Vietnam.”
With decades of service under their belts, Cartner said the veterans have seen the stark contrast in how the country treated the World War II generation versus the Vietnam generation.
“Suddenly, everything became very different. Instead of being recognized for your heroism and your courage, you suddenly became the villain. You did the same things,” Cartner said.
Although Thursday’s ceremony was simple and solemn, Cartner said it is important to do simple things to remind Vietnam veterans they are appreciated.
Ragsdale said many veterans “don’t think highly” of Jane Fonda, an outspoken opponent of the war.
“(Fonda), along with others, protested the Vietnam War. As a consequence of that mood in the country, we Americans did not honor our armed forces who were there and served,” Ragsdale said. “We did not publicly say ‘thank you.’”
Soldiers returning home from Vietnam did not receive a ticker tape parade like that in New York City at the end of World War II, Ragsdale said.
“Not honoring our veterans for their service, their blood and the ugly stuff they went through was not right. It was wrong,” Ragsdale said. “I know we’re a little bit ahead of the curve on this. Others soon will be joining us all across America.”