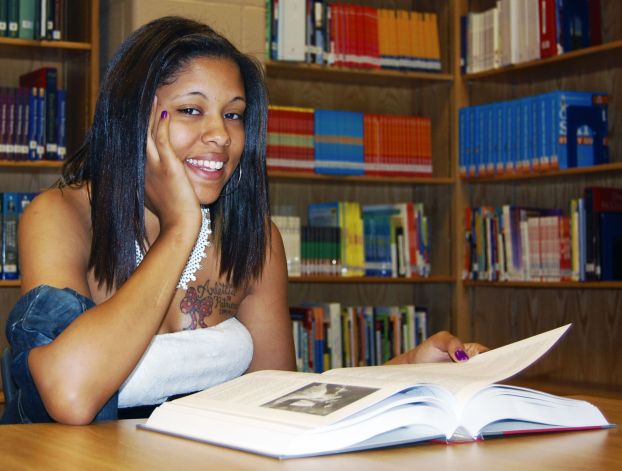 Dropout and teen mom slated to graduate on time

SALISBURY — Being a single parent is tough. Being a single parent in high school is even tougher. Just ask Aaliyah Thurmond.
The Carson High School senior had her daughter, Arlettia Patrice, her junior year of high school.
“I definitely had to grow up quick,” Thurmond said.
Even before she got pregnant, her life wasn’t exactly stable.
Thurmond is a native of Lima, Ohio. Growing up, she moved around a lot, spending six years moving back and forth between North Carolina and Ohio.
“I’ve been to every school in Rowan County except East,” she said.
When she first started attending Carson, Thurmond said, she didn’t fit in very well.
Her sophomore year, Thurmond only attended school two months out of the year.
“The first year I came, I had issues with the school,” Thurmond said.
Her junior year, she only attended for three months.
“The second year I was here, I got pregnant,” she said, adding that she couldn’t attend class because she didn’t have anyone to watch her daughter.
But Thurmond is back in school now, and she’s graduating with her peers in June.
The road to graduation hasn’t been easy.
“Catching up was really hard,” she said.
Thurmond attends classes 12 hours a day. She is taking five day classes and two night classes.
She’s also taken online classes and summer classes.
Things are different now, though.
“It’s changed a lot,” she said. “I have friends in every group.”
Thurmond, her mother and her aunt take turns watching Thurmond’s young cousin and Arlettia each day.
“It sucks not being able to spend time with my daughter as I want to,” she said.
Arlettia likes to sing and dance, she said. “She likes to draw on stuff she’s not supposed to.”
Although the circumstances surrounding her daughter’s birth weren’t ideal, Thurmond said she’s glad it happened, adding that Arlettia is what keeps her going.
“I don’t know where I’d be” if she hadn’t been born, Thurmond said.
She also said she’s thankful for teachers, guidance counselors, pregnancy program mentors and her mom for the time and energy they’ve invested in helping her succeed.
Thurmond hopes to go to Catawba College and eventually become an athletic trainer and physical therapist.
Her desire stems out of two of Thurmond’s passions — her love for sports and desire to help people. She also enjoys giving massages, so Thurmond said it all fits “together in one big bundle.”