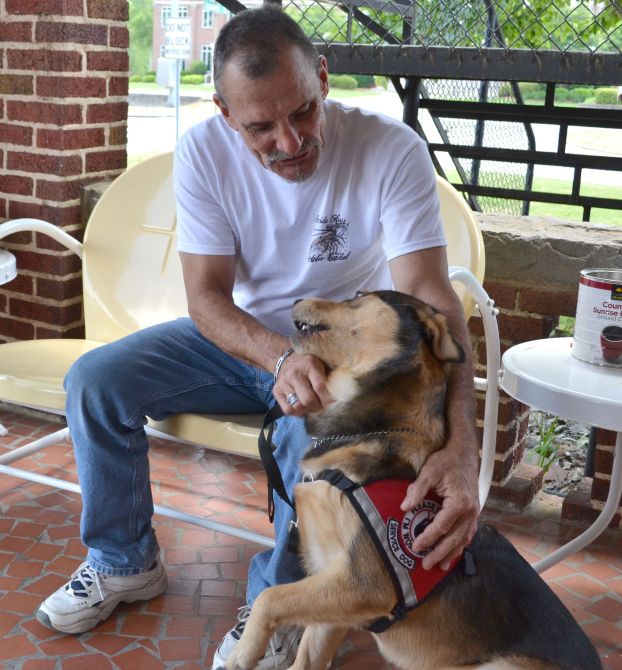 When I recollect the moments of purest bliss from my childhood, many of them feature dogs. Charles Schulz was so right when he observed that happiness is a warm puppy. But most any dog, no matter what age, has the ability to boost our spirits and get us outside of ourselves temporarily. And some dogs do much more than that.
I met a great dog recently through my job with Lutheran Services Carolinas. His name is Moose, and he belongs to a guy named Don.
A veteran with 23 years of service, Don found himself homeless briefly this spring after a job he was counting on in Columbia, S.C., fell through. Looking for help, he waited outside of the Dorn V.A. Medical Center in Columbia one weekend for the doors to open Monday morning. He was accompanied by Moose, a young shepherd mix who is his constant companion.
When the VA called around to find transitional housing for Don in the Columbia area they were told that Moose couldn’t stay with Don. That was a problem, since Don wasn’t going anywhere without Moose.
Fortunately, Don and Moose found a temporary home at Kinard Manor, transitional housing for veterans operated by Lutheran Services Carolinas in Greenwood, S.C. John Penman, the program director there, opened the home’s doors to both Don and Moose.
As it turns out, Moose, who has a service dog designation, has been a wonderful and popular resident of the home — along with Don — for the past six weeks.
“Everybody loves Moose,” John says.
Moose is eight months old, and Don, who has been training dogs since he was a boy, trained Moose himself to help him handle his back problems and walk without using a cane. Moose helps Don balance himself, and he can help Don get up in the case of a fall, as well as retrieve items that are dropped.
He’s also simply a good friend.
“He knows when I’m stressed, when I’m happy,” says Don, who is working to find a job and permanent housing. “And I didn’t have to teach him that. We’ve been inseparable since I got him.”
As I visited with Don, I could sense the connection between the two of them. Clearly, Moose was strongly tuned in to his human companion. And the feeling goes both ways. Don told me that if it had been necessary, he would have gone hungry in order to feed Moose.
“He comes first,” Don said. “He’s my soul and inspiration. I don’t know what I’d do without him.”
Our big black mutt William doesn’t have the practical skills that Moose has. William can’t help us walk better. He can’t sniff out diabetes the way Caden Farmer’s dog Meter can (check out Mark Wineka’s great story from last Saturday about that). He probably couldn’t drag us from a burning building (though I like to think he would). Still, William gives us plenty. He may not have earned a service dog vest, but he serves us emotionally every day.
When William loops his leash around his muzzle and does a strutting pony dance down the sidewalk, the worries of the day melt away. You simply can’t feel sad with an exuberant dog begging so winningly for your attention and affection. Happiness is a warm puppy, sure, but happiness is also a goofy black dog who prances down Mitchell Avenue and loves you unconditionally.

I’d love to hear what’s making you happy. Email it to salposthappy@gmail.com

Blessings upon the Salvation Army for dreaming up National Doughnut Day, coming up this Friday. It’s your chance to get... read more