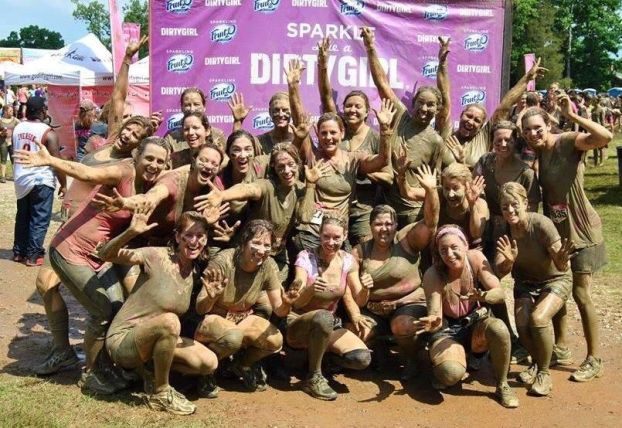 Sometimes you just have to go do things. Forget the caution, any reservations about fitness, and any doubts about ability.
It all started with six women who were friends and wanted to do something unusual together. Tracy McMillin, Dr. Jennifer Hudson, Cara Reische, Karen Martinez, Amy Bemus and Lori Goodnight all signed up to be Dirty Girls for the first time in 2013.
That was last year. The destination was Charlotte and the Dirty Girl 5K Mud Run and Obstacle Course. This event had some things that were appealing to the group.
“It was not competitive, we were not being judged, and any woman of any size could do it,” McMillin said. “We knew that some of us were runners and some of us were not. Everyone was going to be OK.”
The Dirty Girl 5K series started in only three major cities in 2011 but now has grown to 25 cities. The series is open only to women participants and proceeds go to help with women’s health issues such as breast and ovarian cancer. The primary sponsor is Paul Mitchell, a hair care company.
The original six participants told their friends, and momentum started to build for the 2014 version of the Dirty Girl 5K. As more women heard about the fun from 2013, they wanted to get involved, McMillin said.
“Our group quickly grew to 35 women. Teachers told other teachers, friends told their neighbors, and so on,” she said. “We asked the newcomers if they wanted to do the Dirty Girl. Most of the group had no idea what they were getting into. We had good representation from all across Salisbury and Rowan, and nearly all were moms. We even had one, Whitney Wallace, who had just had her baby.”
For 2014, the closest site for the Dirty Girl 5K was in Archdale at Kersey Valley Inc. It was billed as the Raleigh/Greensboro event, and the Salisbury group found that travel would not be a big factor even though most were prepared to drive much farther if need be. More than 3,200 women took part.
Tie-dyed shirts were prepared, and pretty soon they were being left in mailboxes, on porches and behind shrubs as the team was formed.
“We wanted cohesiveness, but we knew that everyone would have fun,” McMillin said. “We also knew that those shirts wouldn’t look the same at the end.”
The group put together a plan for several initial meeting places on the morning of Saturday, May 31, with most using Lowe’s Home Improvement, Overton Elementary School and the Salisbury Country Club. Then the smaller groups all came together at the Long Ferry exit on Interstate 85 and headed for Archdale, where they were to meet their shuttle to the event.
Shuttles were huge Greyhound-style buses with all the seats covered by industrial-quality plastic trash bags. The group from Rowan County had to start in the waves that began at 9:15, 9:30 and 9:45 a.m., but there was no rush to get anywhere after that.
Every woman got muddy, with some of them getting a little extra thrown on. McMillin said the original group had learned a few things in 2013 and knew what to expect both during and after the mud and obstacle run.
“We knew to wear shoes that were just about worn out anyway because they would never be the same again,” she said. “Most of our clean-up was going to be done with a garden hose, and we had to get our muddy clothes off. Modesty was not much of an issue in the tent provided for that purpose.”
Q-tips were a hot item, and everyone asked for them.
“Those of us who went last year knew we would need them,” McMillin said. “Some of the women asked for one and then more and more until as many as eight Q-tips finally completed the clean-up. They just worked best to clean out that mud. Next year, we are taking goggles.”
All the participants had the opportunity to leave their shoes for the needy. Most donated to the mountain of dirty shoes and were glad the shoes would all get a professional cleaning. Hudson actually donated her muddy shoes before realizing that she didn’t bring a second pair.
“Everyone was welcome to stay all day. They had bands, refreshments and lots of giveaways. There were plenty of vendors, but most of the things were free. We even had a ticket for an adult beverage, giving a new meaning to a beer breakfast,” McMillin said.
“Salisbury and Rowan County were well represented, and you can tell in the photos that everyone was having a great time. We cast a wide net with women from all over the city and from ages in the 20s through the 50s,” she said. “I’m convinced we will have lots more women going next year.”
For more information about the events, go to www.godirtygirl.com