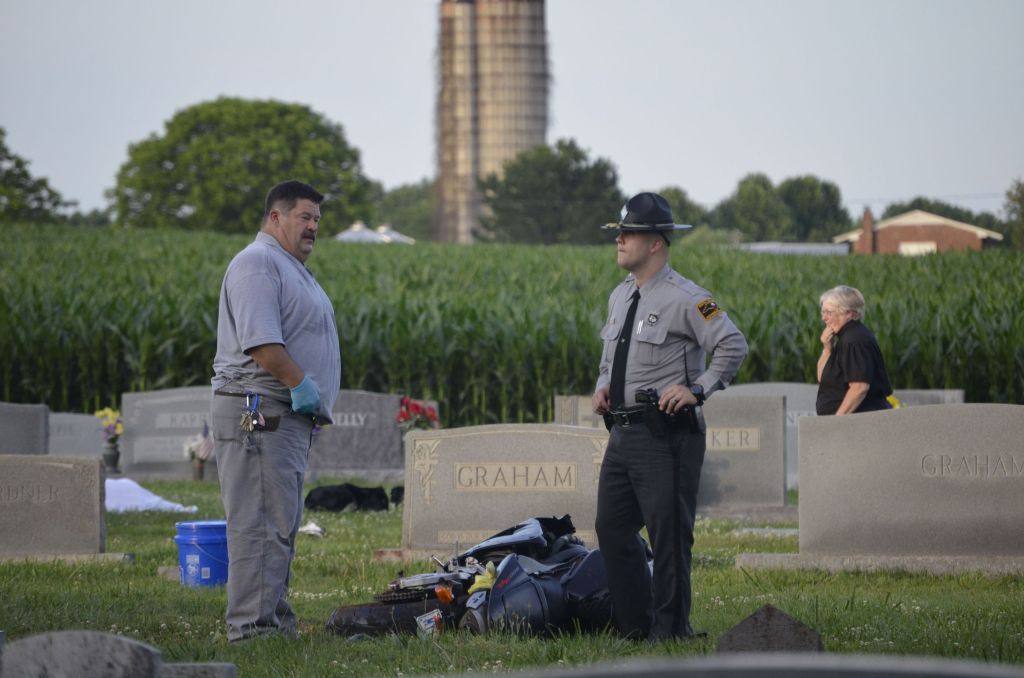 MOUNT ULLA — N.C. Highway Patrol officials want to talk to the driver of a black older Ford Mustang convertible that may have key information about a Thursday fatal motorcycle crash at N.C. 801 in front of St. Luke’s Lutheran Church.

A 31-year-old Mocksville man was killed after his Honda motorcycle left the roadway and crashed into tombstones at the church cemetery.

The motorcyclist lost control, ran off the road to the left and he was thrown from the motorcycle. He struck about four tombstones, some of which were damaged. Fire officials said at the scene said the motorcycle hit with such force it moved a few tombstones out of position.

The motorcycle came to rest in the cemetery among tombstones and the victim was about 65 feet from the motorcycle. Fire personnel were seen collecting clothing, a helmet, shoes and debris from the bike that was scattered throughout the cemetery.

Troopers are not sure if the motorcycle and the Mustang made contact, but a conversation with the driver could help clear up any questions, Barringer said.

The Rev. Mary Louise Sitton, pastor of St. Luke’s, said the crash evoked painful memories of the death of Andrew Gardner, 19, who was killed in a motorcycle crash in July 2008 near the cemetery. Similar to this crash, Gardner was traveling east, but he struck a utility pole and hit a culvert. He died at the scene as well.

A church member notified Sitton of the Thursday crash. She said she was home, but did not hear it.

“She said, ‘There’s been a terrible accident. A motorcyclist has been killed,’ ” Sitton said.

Sitton said the crash brought memories of losing someone so dear to them.

“All our lives were changed when that happened,” she said.

Sitton said she can’t help but think of the family of the Mocksville motorcyclist.

She prays God would strengthen the family, Sitton said.

“We don’t know him, but he was created by God and it’s personal,” she said.