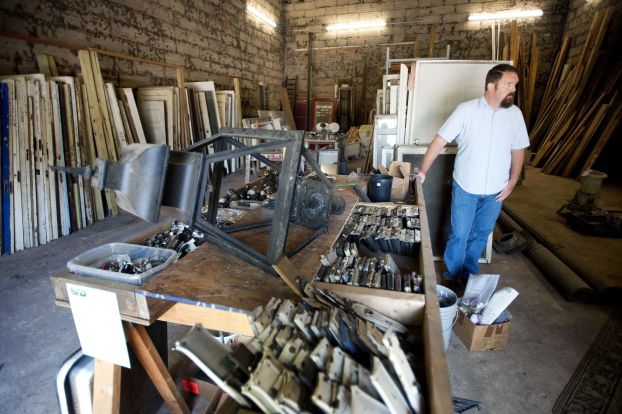 SALISBURY — Justin Dionne knew exactly what he and intern Greg Stoughton were looking for — four windows.

They came to the right place.

Historic Salisbury Foundation’s new architectural salvage store is a treasure chest of doors, windows, mantels, columns, wood trim, flooring, lighting, shutters, switch plates, hinges, clawfoot tubs and other items rescued over the years from structures that have been torn down or burned up in fire training exercises.

“All of this otherwise would be in the landfill, pulverized and of no use to anybody,” said Brian M. Davis, executive director of Historic Salisbury Foundation.

The foundation-owned Salisbury Ice & Fuel Co. building at 224 E. Horah St. has been transformed into this salvage warehouse and is a recycling story in itself.

The architectural salvage store had a “soft opening” last Saturday and sold $900 in materials. Plans are for the warehouse door to be open for customers each Saturday from 9 a.m-noon, and 1-4 p.m. It will be manned by Jon Planovski and Steve Cobb, who if need be, can process credit cards for purchases.

Davis thinks the salvage store can become a first-stop shop for contractors and homeowners looking to rehabilitate historic structures. But interior decorators, artists and people with the creative chops to find new uses for old things also will want to make some visits.

Dionne, managing director for Lee Street Theatre, was looking for windows that can be employed for the set of “Driving Miss Daisy.”

The foundation allows Lee Street and other theater groups to borrow items for their sets and bring them back after the productions have closed.

As he walked through the old ice plant, Dionne took cellphone pictures of various windows and sent them to his technical director. “Is this the type he’s looking for?” Dionne asked aloud.

In the end, Dionne settled on four windows, each with six panes, but he also had fun seeing the other materials in the salvage store.

“This is like straight out of ‘Death of a Salesman,’” Dionne said of one particularly classic sink.

Davis said the foundation has worked in the past with Chris Branham, code services division manager for Salisbury, in identifying places where HSF crews could go in and salvage building materials before a house is pushed over or burned down.

The foundation would like to establish similar cooperative agreements with all municipalities in the county, Davis added.

But there are a lot of other things: switch plates, a door from White’s Barber Shop, cast-iron columns from the old Vanderford Hotel or the gates to a picket fence.

HSF also will use the ice plant as the place to accept reusable building materials, providing a letter to the donor so the contribution can be claimed for tax purposes.

All the proceeds from the salvage store sales go to support the foundation and its preservation mission. The materials also can help sometimes with improvements to the foundation’s revolving fund properties.

Davis, who came to Salisbury from a similar position in Galveston, Texas, says Galveston operated a salvage store for 30 to 35 years.

Over time, when the foundation salvaged items at various places, they would be delivered to the ice plant building and pretty much be dumped there.

It became quite a project to sort everything and make what has become the selling floor navigable.

Many years ago now, the foundation saved this four-story portion of the ice plant, located next to the railroad tracks and the closed grade crossing at East Horah Street.

Information on the foundation’s website says the ice plant operation was “just as an important community gathering spot like the post office or general store would have been.”

“At one time,” the article continues, “up to 21 trucks delivered ice and fuel, such as coal and heating oils, to homes and industrial plants. In 1933, after prohibition ended, Salisbury Ice & Fuel Co. began distributing Lion Beer.”

By 1916, demand for ice pushed the Salisbury plant’s storage capacity to 100 tons. By 1932, the plant expanded to 2,500-ton storage capacity. Its heyday continued until right after World War II, then advances in refrigeration caught up with this kind of operation.

It eventually closed in the 1960s. By 1974, a decision was made to demolish the ice plant, but only the west side of the plant, including the office, was torn down, leaving only the tallest brick portion beside the tracks.

In the past, foundation officials have discussed making a museum out of the property, but for now its found new life as the salvage store.

“We’re glad to finally get it up and going,” Davis says.

GRANITE QUARRY — The Granite Quarry Board of Aldermen approved an annexation ordinance Monday night that will bring more than... read more