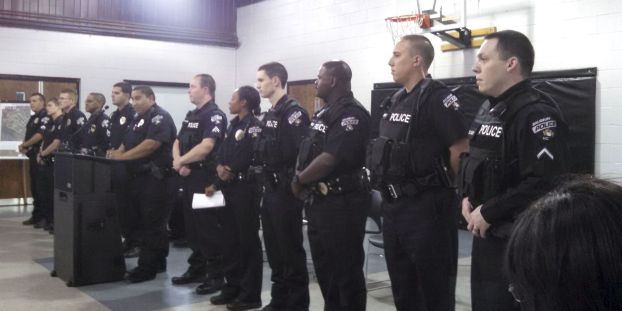 There have been many discussions, meetings and news accounts from West End residents who say they fear walking through their own neighborhood. Many of those same residents gathered at a community meeting held a week ago at the Miller Recreation Center.

During the meeting, Police Chief Rory Collins discussed at length the plans his department has begun implementing to combat crime in the West End, much to the residents’ discontent. Collins gave a detailed description of the changes, which include beefing up patrols and incorporating a community relations officer, Reuben Ijames, who acts as a liaison between the West End and the police department.

Several of the department’s officers and supervisors spoke about their commitment to the West End.

Sgt. Corey Brooks, a Livingstone College graduate, spoke about his connections to the West End community. Many also know Brooks because he often drives the bus for sporting events.

In 2003, an off-duty Brooks, dressed in a suit, was approached by a man attempting to rob him at gunpoint. Brooks identified himself as a Salisbury Police officer, pulled out his gun, was able to call for help and even chased the suspect.

“I know how it feels when you hear sirens coming. It’s like a sigh of relief,” he said.

He encouraged the residents to call if they see unusual activity.

“With your help we can make the West End a stronger place,” Brooks said.

Residents have said what law enforcement have done is a “step in the right direction.”

Although there didn’t seem to be many kudos for the officers, some of whom attended the meeting on their day off, Collins didn’t seem disheartened and was excited and encouraged about the meeting. He has said there will be other opportunities for continued discussion.

What I found interesting from the meeting and wanted to zero in on was some statistics Sgt. Bryant Willis provided during the meeting. Willis said in the three weeks the team was patrolling the West End, they made 40 arrests and seized the following:

• 192 pills including Ecstasy and prescription

The officers have continued to patrol the streets and make their presence felt. It was even said during the meeting that people that in the past have committed crimes in the West End are thinking twice because of the enhanced police presence.

I say kudos to the officers patrolling West End. You have a long way to go, but I’ve heard it said that a “journey of a thousand miles begins with one step.”