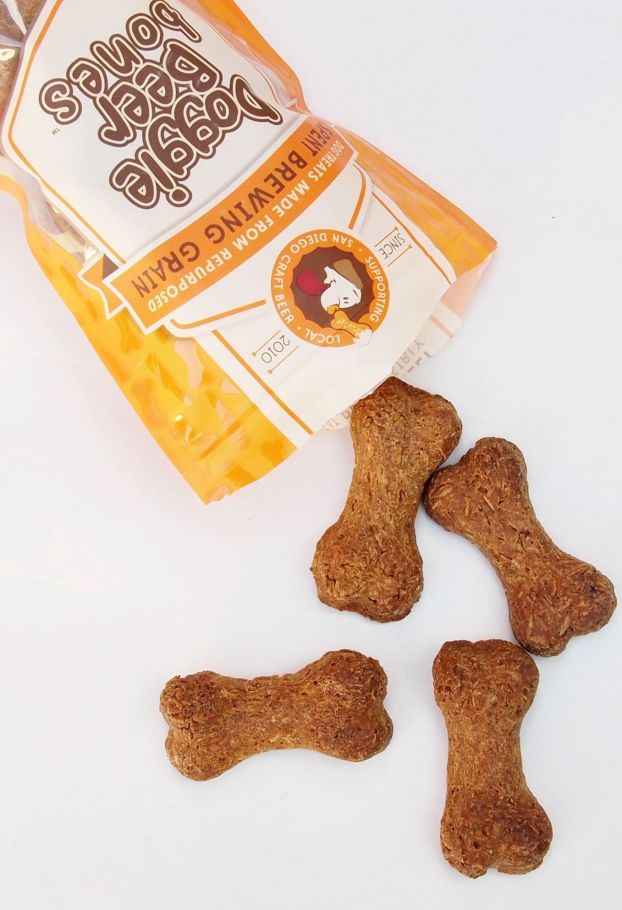 RICHMOND, Va. (AP) — When you crack open and drain a craft beer, you probably don’t leave much behind. The same can’t be said for the process of making those brews, which yields a pound or more of leftover grain per six-pack.
But the industry is getting increasingly crafty about how to get rid of the grain and hops left after brewing, turning the byproducts and the beer itself into everything from bread and dog treats to lip balm and soap.
In basic terms, individual breweries may use tractor trailer loads — or roughly 50,000 pounds — of grain every day to brew tens of thousands of gallons of beer. That grain is soaked in warm water, which extracts starch that turns into fermentable sugars. Once that’s done, the grain is separated and discarded, and the brewing process continues.
Because of the sheer amount of spent grain in beer-making, the majority of it ends up on farms for animal feed or compost. Federal officials last month backed off proposed livestock feed rules that beer makers feared would cost $13.6 million per brewery if they wanted to sell grain left from making beer to ranchers and dairy farmers.
But there’s no shortage of ways brewers are disposing of the fruits of the fruits of their labor.
In Virginia, Devils Backbone Brewing Co.’s pub serves bread made with spent grain and works with other artisans in the state to make sausage and cheese using its beer. The Alaskan Brewing Co. in Juneau last year installed a unique boiler system furnace that burns the company’s spent grain to create steam which powers the majority of the brewery’s operations. Oskar Blues, which operates breweries in Colorado and North Carolina, has “beer-blessed” lip balm made from the hops and barley in its Old Chub Scotch Ale.
“Innovation has long been a hallmark of craft brewers, where the brewers are always looking for new things they can create that haven’t been made before,” said Paul Gatza, director of the Brewers Association, a Colorado-based trade group for the majority of U.S. brewing companies. “It’s attractive to the consumer that, ‘Oh, there’s another use for what’s going into my beer.”’
Blocks away from North Carolina State University in Raleigh, Trophy Brewing Co. uses some of its spent grain to make granola and cookies, as well as the dough for the pizza it serves, including “The Daredevil,” which has ghost chili pepper salami, fire-roasted tomato sauce, mozzarella blend, fresh jalapenos, caramelized onions and Sriracha hot sauce. The spent grain provides a nutty flavor and hearty texture for the dough.
“When you bite into a piece of that crust and you get a little bit of that malt, it adds another depth to the flavor profile,” said Trophy’s co-owner Chris Powers. “People definitely wonder what makes our pizza different. … We try to get great beer into all aspects of your experience at Trophy.”
Great Lakes Brewing Co. in Cleveland uses spent grain in the soil at its farms and as a surface on which to grow mushrooms. It also uses beer from bottles that were under-filled for sauces, ice cream, soups and sausage in menu items for its brewpub.
Other companies also are cashing in on the spent grain such as ReGrained, a California-based company that uses it in granola bars.
In brewery-heavy San Diego, Green Flash Brewing Co., Stone Brewing Co., Societe Brewing Co. and others supply their spent grain to David Crane, a home brewer whose small company makes “Doggie Beer Bones” out of the beer leftovers mixed with peanut butter, barley flour, eggs and water. They’re sold in breweries and pet stores nationwide and on the Internet. But don’t worry, Fido, won’t get drunk off of them — they don’t contain alcohol or hops, which are harmful to dogs.
From Crane’s perspective, the amount of grain he gets from the breweries is huge, but admittedly, from the breweries’ perspective, “it’s probably a drop in the bucket.”
One of Crane’s suppliers, Green Flash, said most of its spent grain goes to farms for cattle feed, but co-founder Mike Hinkley is glad the byproducts are being used for other creative purposes.

Thomas Ethan Hester graduated from Kenan-Flagler Business School at the University of North Carolina Chapel Hill, on May 10, 2014,... read more