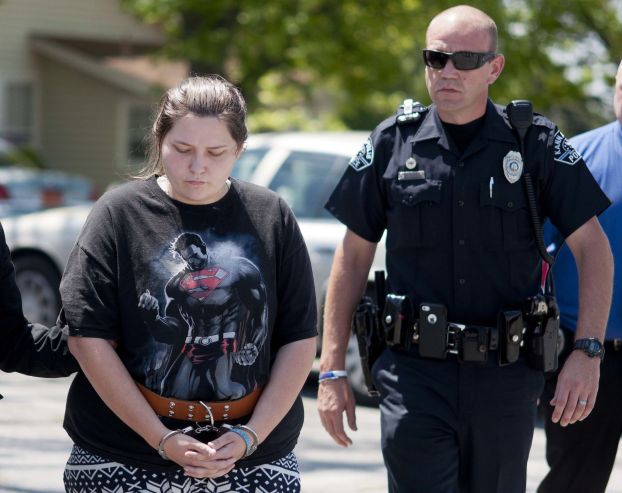 KANNAPOLIS — Police investigators have not determined a clear motive in the murder of 15-month-old Malaya Faith Heun, who they say suffered repeated physical abuse at the hands of John Travis Turner and Alisha Nicole Carlisle, the child’s aunt.
The two are each charged with first-degree murder, felony abuse inflicting serious injury and assault with a deadly weapon inflicting serious injury. Kannapolis Police arrested Turner, 30, and his girlfriend, Carlisle, 20, on Monday. Carlisle is the sister of Christy Heun, the child’s mother.
An autopsy report said Malaya had several broken ribs, some of which had already healed. She had multiple bruises on her face, head and body, a fractured clavicle and torn intestines. The report said the broken collarbone “would have been obvious and painful,” and would have limited the use of her right arm. The injuries are consistent with Battered Child Syndrome, the autopsy said.
Malaya underwent surgery and was placed on life support. Her mother elected to withdraw life support Jan. 22, the autopsy report said.
Her cause of death was “septic shock due to complications of injuries sustained as a result of repeated inflicted blunt force trauma to the abdomen,” the report said.
Chief Woody Chavis did not say what object was used to cause the abdominal injury, but he did say hands could be weapons.
He did not elaborate as to whether the injuries Malaya received were the result of being punched or kicked.
Chavis said investigators have not identified the motive behind the brutal attack. Carlisle and Turner have not been cooperative, he said during a Monday press conference.
The abuse is likely to have occurred about a month prior to the discovery of the toddler’s injuries. Chavis said he believes the abuse was done by Turner and Carlisle.
Investigators don’t believe Christy Heun had any knowledge of the abuse. Chavis said he doesn’t anticipate any other arrests at this time in the case.
Early search warrants indicated investigators believed Malaya may have been sexually abused, but the autopsy report said no such abuse was evident.
Chavis called this “one of the worst cases of child abuse I have seen in over 30 years being a police officer. … I have seen many abused and battered children during my career but this one was extremely disturbing knowing how much this baby must have suffered before she died.”
He said anytime an abuse case involves a child, it’s horrible. He said his investigators were very motivated to not stop “until they were able to make these arrests.”
In fact, the investigators had a picture of Malaya hanging above their desks as a reminder.
“I want to thank the family and the community, for their tolerance and understanding during this process. I especially want to thank the press for their unwavering questioning and reporting that kept this terrible case in the news and they wouldn’t rest until they had some answers,” Chavis said.
Christy Heun said early in the investigation she received a call while she was at work from her sister saying Heun needed to return home. Heun was told something was wrong with her daughter, the youngest of her four children.
Investigators believed the child was assaulted Jan. 19 at her family’s apartment at 2508 Running Brook Drive in the Rowan County portion of Kannapolis.
Kannapolis Police Department Communications Center received a call from the Rowan County Communications Center requesting first responders at the apartment. As the call continued, dispatchers were notified the victim, later revealed to be Malaya Heun, was being taken by a family member to the hospital. Search warrants say Malaya was at the apartment with Carlisle and Turner, who was arrested before the child’s death on an unrelated matter. He was charged with possession of drug paraphernalia. He was currently in the Cabarrus County jail charged with a probation violation.
Chavis said both Turner and Carlisle were the sole caretakers of the child at the time of her injuries.
The warrant said Malaya was in the care of both Turner and Carlisle before she was taken to the hospital.
Malaya was taken to Carolinas Medical Center in Charlotte. The next day police received a call from the Cabarrus County Communications Center regarding a child abuse complaint at the hospital. Police served a search warrant at the Running Brook Drive home and discovered five liquor bottles and a filthy apartment.
A Post reporter went to the apartment in an attempt to speak with Christy Heun, but was unsuccessful in obtaining a response. Jamie Heun, Malaya’s father, did not immediately respond to a request for comment.
His mother, Loretta Heun, said she did not immediately know an arrest had been made in the case. A friend notified Loretta of the status.
“I’m ecstatic at the moment, but I am also wondering what’s the next step,” she said by phone.
Heun commended the Kannapolis Police Department on the thorough investigation. “They worked hard on the case,” she said.
She always believed Carlisle and Turner had something to do with Malaya’s injuries, saying “they were the last ones that were with her.” Loretta Heun said her son was “booted out” of the apartment and Carlisle and Turner moved in.
“There’s no telling what my granddaughter went through,” Heun said.
Heun said she also blames Christy for not noticing Malaya’s injuries. “You can’t tell me my granddaughter didn’t cry out in pain.”
Police have not charged Christy Heun.
Contact reporter Shavonne Potts at 704-797-4253.