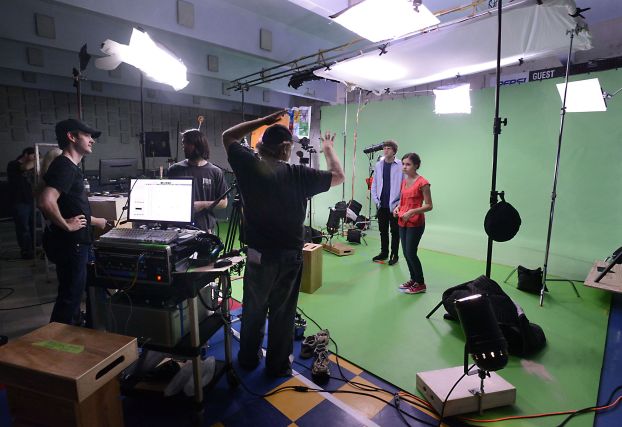 With the help of a green screen, actors, a production team and a little technological magic, a downstairs room of the First Ministry Center, or the old YMCA building on Fulton Street, was transformed into outer space last week.
It’s all a part of filming “Scienstars” — the pilot for an educational science-fiction series.
“I wanted to do a science-fiction series because I’m a sci-fi nut,” said Executive Producer Vincent Barnett of Morrisville.
But when his son was born, Barnett’s focus began to change.
“I wanted to make something that was educational as well as entertaining,” he said.
So he set out to write a series that would introduce scientific concepts in line with a seventh-grade curriculum.
Barnett’s hope is to “introduce the concepts in a fun, exciting way.”
For example, the pilot episode focuses on energy. Characters are faced with situations where they learn about energy transfers, types of energy and energy conversion.
Other episodes are slated to deal with physical, life and earth science, as well as engineering topics.
Barnett said he isn’t sure if the series will be released on DVD, or simply streamed over the internet. He does plan to bundle it with educator materials, though.
The project is currently self-funded by Barnett, but his plan is to find supplemental funding for the rest of the series. Options include crowd funding, grants or backers.
“We know exactly what our target audience is,” he said, emphasizing that the audience includes educators, parents and students.
Director Adam York said there is an “enormous amount of green screen work,” in the project, which allows the film to take place in space and on a spaceship.
York, who lives in Salisbury, received his bachelor’s of arts degree in theater arts from Catawba College in 2007.
When Barnett approached him about working on the project, York suggested filming in Salisbury and enlisting the help of Six Foot Kitten, a local media development agency.
Six Foot Kitten uses graphics, video, audio, web development, animation and other creative strategies to help their clients promote their brands.
Six Foot Kitten is overseeing the videography and editing. The computer generated imagery will be added by a designer who lives in Spain.
Jerod Jacobs, founder and creative director of Six Foot Kitten, said the production has also contributed to the local economy.
“I have a lot of resources here,” he said.
The cast and crew have used local caterers, craftsmen and made daily trips to Walmart.
The cast and crew filmed all last week.
Each day started anywhere between 5 and 8 a.m. and wrap up between 10 p.m. and midnight.
“That’s fairly standard,” said Lilly Nelson, who plays Lt. Victoria Xen in the pilot.
Nelson, who is a self-proclaimed “nerd” and “geek” said she’s thrilled to be a part of “Scienstars.”
She enjoys playing a strong female character who gets to “go out and conquer the galaxy” and “fight for what is right.”