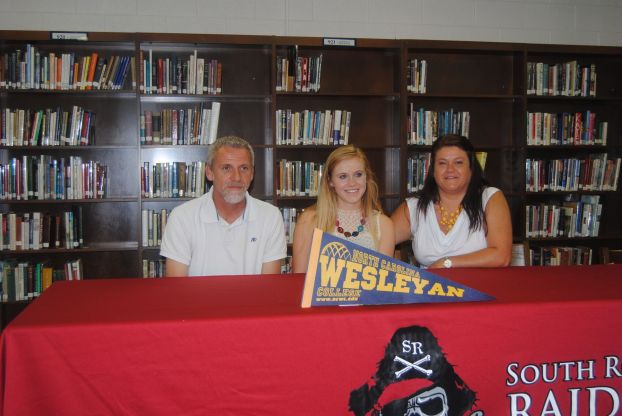 Still, compared to what Lowery went through in late March, the adjustment to college softball shouldn’t be scary at all. It should fall into the piece-of-cake category.

On March 26, Lowery was struck in the face, close to her left eye, by a line drive an instant after delivering a pitch in South’s SPC game at Northwest Cabarrus.

“It was the third inning, and I remember throwing that pitch, but I never even saw it coming back at me,” Lowery said. “The ball hit me and I went down. I never lost consciousness. I just remember lying on the ground crying and screaming.”

The impact of the line drive fractured two bones in Lowery’s face, but it was something of a miracle that she wasn’t more seriously injured.

“My face was swollen way out there for quite a while,” Lowery said with a smile. “But I was really lucky. The doctor told me if my face had been turned just a little bit I would have been in surgery a long, long time.”

A 5-foot-4 bundle of energy — well, 5-foot-4 and a half — Lowery not only was back on her feet in time for the prom, she missed only three softball games.

She returned against Cox Mill on April 8, 13 days after her injury. She not only drove in three runs to lead a South win, she got back into the circle for three innings like nothing had happened.

“I’ve just always loved to pitch,” Lowery said. “Even when I was playing T-ball, I ran out there and stood on the pitcher’s mound.”

Lowery is a good athlete. Her coaches marvel at the splits she performs and the leaping ability she shows at first base when teammate Samantha Kennerly is in the circle. She drove in 14 runs as a senior.

South coaches believe she can help N.C. Wesleyan, a D-III college that competes in USA South with schools such as Averett and Methodist, at first base as well as in the circle.

Lowery committed to N.C. Wesleyan back in the fall after visiting. NCW can’t offer athletic scholarships, but it recruits good athletes who also are good students and puts together nancial packages that make college affordable.

“Logan needs to pick up a few more miles an hour on her fastball, but she can do that,” West said. “Velocity comes from the legs, and she’s going to work on her leg strength this summer. She can compete for a starting position right off.”

She had a 2.85 ERA. struck out 106 batters in 88 1/3 innings and fanned 10 or more hitters five times. She struck out 13 twice and allowed only two homers — to all-conference players Cat Whitley (West Rowan) and Kaleigh Troutman (East Rowan).

When South (10-10) was battling for a playoff spot on the last day of the regular season, Lowery shook off a homer by Troutman, struck out 10 and pitched a complete game to beat East.

Lowery got it done in the circle with a combination of speed and trickery.

“I throw 11 different pitches and I’ll throw all of them in a game,” she said.

Among the more exotic pitches freshman catcher Rileigh Ward called for Lowery were a screwball, a knuckle curve and a drop curve. South coach Hunter Fuller said the drop curve is Lowery’s bread and butter.

“That’s her best pitch — it’s an automatic groundball,” he said.

Lowery credits two ladies for much of her success. South P.E. teacher Jan Dowling for the strength and conditioning work she’s done with Lowery, and former South coach Tiffany Carter for pitching instructions and inspiration.

“Coach Carter is the one that convinced me that even though I was small to be a pitcher I could do it,” Lowery said. “She told me that size couldn’t keep me from being a college pitcher.”

Lowery said she was offered a chance to play at D-II schools, but N.C. Wesleyan made the best offer and gives her the best chance to succeed on the field.

“I really want to play, not sit on a bench,” Lowery said. “If I’m pitching, it’s going to take my mind off being so far from home.”

West said Lowery made a fine transition from hard-headed freshman to senior leader.

Her teammates feel the same way, and they surrounded her at a signing party last week.

“We could depend on as a competitor and as a teammate,” South junior Beth Ann Martin said. “We all looked up to her.”

SALISBURY — Davidson County only had one serious chance to make it a ballgame on Saturday, and Rowan County pitcher... read more