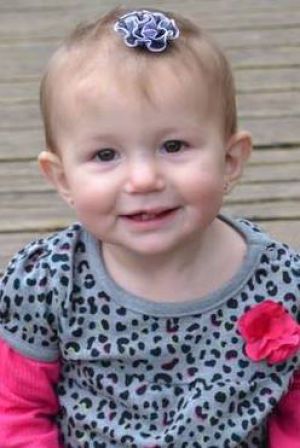 KANNAPOLIS — Police have charged two people with murder in the death of 15-month-old Malaya Heun, who suffered repeated physical abuse prior to her Jan. 21 death.
John Travis Turner and Alisha Nicole Carlisle — Malaya’s aunt — are each charged with first-degree murder, felony abuse inflicting serious injury and assault with a deadly weapon inflicting serious injury.
They were charged this morning.
Kannapolis Police Chief Woody Chavis called this “one of the worst cases of child abuse I have seen in over 30 years being a police officer. … I have seen many abused and battered children during my career but this one was extremely disturbing knowing how much this baby must have suffered before she died.” (See his full statement at the end of this article)
The child’s mother, Chrisy Heun, said early in the investigation she received a call while she was at work from her sister saying Heun needed to return home. Heun was told something was wrong with her daughter, the youngest of her four children.
Investigators believed the child was assaulted Jan. 19 at her family’s apartment at 2508 Running Brook Drive in the Rowan County portion of Kannapolis.
Kannapolis Police Department Communications Center received a call from the Rowan County Communications Center requesting first responders at the apartment. As the call continued, dispatchers were notified the victim, later revealed to be Malaya Heun, was being taken by a family member to the hospital. Search warrants say Malaya was at the apartment with Alisha Carlisle, the sister of Christy Heun, and John Travis Turner, who was arrested before the child’s death on an unrelated matter. He was charged with possession of drug paraphernalia.
The warrant said Malaya was in the care of both Turner and Carlisle before she was taken to the hospital.
Malaya was taken to Carolinas Medical Center in Charlotte and the next day police received a call from the Cabarrus County Communications Center regarding a child abuse complaint at the hospital. Police served a search warrant at the Running Brook Drive home and discovered five liquor bottles and a filthy apartment.
A search warrant Malaya had seven broken ribs on her left side, bruising on her head and body, a displaced clavicle and torn intestines. The intestinal injury caused a severe infection and sent Malaya into septic shock. She underwent surgery and was then placed on life support. She also had a blood alcohol content of 0.02.

The brutal murder of Malaya Heun who was born on October 13, 2012 was one of the worst cases of child abuse I have seen in over 30 years being a police officer. Malaya was brutally assaulted on January 19, 2014 and eventually died on January 21, 2014 from complications from blunt force trauma and hypovolemic shock.

I have seen many abused and battered children during my career but this one was extremely disturbing knowing how much this baby must have suffered before she died.

My investigators have worked so hard on this case and every one of them has a picture of Malaya hanging over their desk to remind them of the pain and suffering which was inflicted upon this little girl. This case has been priority one since day one for us to insure that justice was served.

The lead investigators in this case were Investigator Jennifer Hyatt and her immediate supervisor Sgt. Justin Smith.

They, along with all of the other assisting investigators in our Criminal Investigation Division have put together what I believe is a rock hard case for prosecution.

We conversed daily and worked closely with Rowan County District Attorney Brandy Cook to coordinate our efforts to ensure that we had all the bases covered. We wanted all the i’s dotted and the t’s crossed. We all know that when you build a house you have to make sure that you have a solid foundation that will support the structure as it goes up. Building a criminal case is much the same process. You have to make sure that there are not any holes or weak places in your foundation that may be a problem during prosecution. I feel extremely confident that my investigators and the District Attorney have built a solid foundation to prosecute this case.

We have been confident all along that this case would be closed and the persons would be identified and held responsible for this horrendous crime. I made a promise that we would get justice for little Malaya. It brings me great pleasure to know that day has finally come.

I want to thank the family and the community, for their tolerance and understanding during this process. I especially want to thank the press for their unwavering questioning and reporting that kept this terrible case in the news and they wouldn’t rest until they had some answers.