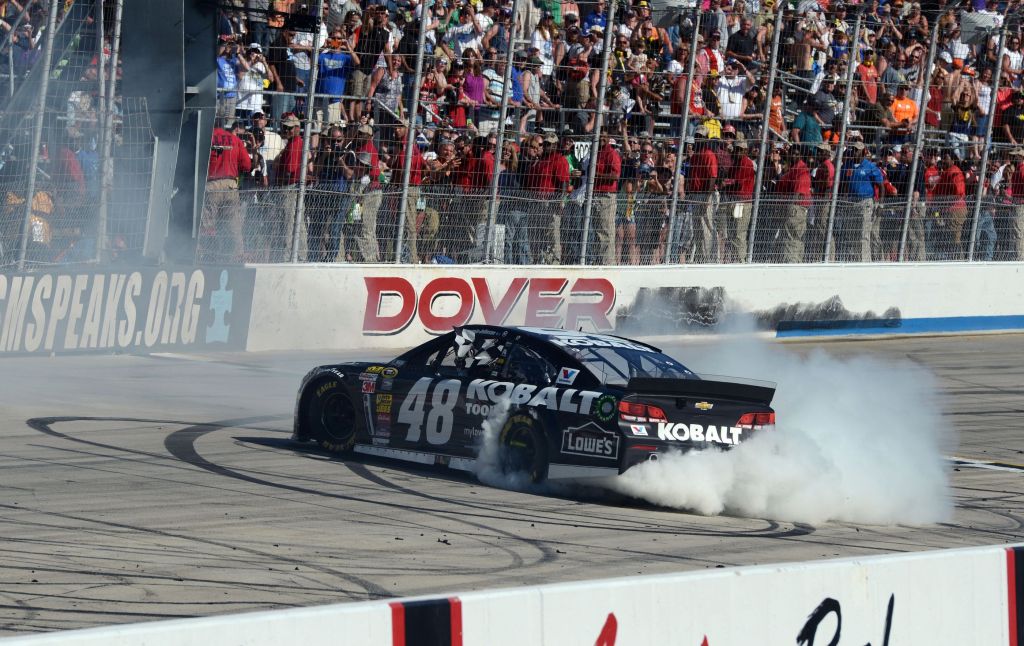 DOVER, Del. (AP) — Jimmie Johnson handled the pothole at Dover the same way he disposed of a rough patch to start the season.
He won.
A week after shaking off a lengthy winless streak by his championship standards, Johnson raced his way to another routine romp at Dover International Speedway. He followed last week’s victory in the Coca-Cola 600 with another sensational run at Dover, extending his track victory record to nine.
Johnson was the class of the field in a race red-flagged for 22 minutes to repair a pothole in the concrete track.
“Whatever they put in the pothole, it worked awfully well,” Johnson said.
His No. 48 Chevrolet was even better.
Johnson led 272 of 400 laps, and won consecutive races for the 13th time. The six-time Cup champion swept Dover in 2002 and 2009 and won races in 2005, 2010, 2012 and 2013.
Brad Keselowski was second, followed by Matt Kenseth, Clint Bowyer and Denny Hamlin.
“For sure, when you come to Dover, it’s always the 48,” Kenseth said. “We’ve got to figure out how to get ahead of him.”
Good luck. Johnson’s checkered flag celebrations at Dover have seemingly become a rite of the NASCAR season. He became Dover’s career leader in laps led when he hit the 2,802 mark, and again stamped himself as contender for a series-tying seventh championship.
“It’s amazing that we can stay on top of things here with the different generation car, different rules, different tires,” Johnson said. “This place just fits my style and (crew chief) Chad Knaus’ style.”
His lone regret, that owner Rick Hendrick was not at the track.
Johnson is heating up right as the NASCAR heads into its summer schedule. Up next, Pocono, where Johnson won last season and has two other wins.
“We can get on a roll,” he said. “We’ve got some good tracks ahead of us.”
Johnson had some wondering what was wrong after an 0 for 11 start to the season. Turned out, it was nothing racing at some of his favorite tracks couldn’t fix. But Johnson also revealed he had surgery to repair three hernias at the end of last season, which cost the No. 48 team testing time.
“We felt like it was time to shut things down and let the team kind of recoup,” he said.
Johnson never left any doubt his No. 48 Chevrolet was the car to beat, the only drama coming when the race was stopped 160 laps into the race after Ryan Newman’s car pulled up chunks of the track that kicked back and damaged Jamie McMurray’s car. The race was soon stopped and crews weren’t allowed to work on the cars.
McMurray’s plea for an exception was denied.
“It killed the front-end,” he said. “Our guys did a really good job recovering here putting all the stuff on and we salvaged what we could.”
More pieces of the track flew up and cracked a window on the pedestrian crossover bridge.
NASCAR officials and safety crews went to work on the potholes and applied a quick-drying concrete mix. Cup races were infamously delayed by potholes at Martinsville in 2004 and the 2010 Daytona 500. McMurray won at Daytona in 2010.
“It started to come back up at the end, but I didn’t think it was a major issue,” Keselowski said. “It was definitely a major issue at first when it happened. I could feel it when I was driving over it, and you knew it was only going to get worse.”
Kevin Harvick might have wished for a longer delay. Harvick’s lead at the red flag evaporated because of a flat tire not long after racing resumed and he fell two laps behind Johnson. Harvick worked his way back into a 17th-place finish.
Kyle Busch led the first 81 laps before Johnson passed him. Busch’s bid for a tripleheader sweep at Dover would soon end when the No. 18 Toyota slammed into the outside wall. Bowyer moved into Busch’s line, which caused him to wreck 124 laps into the race.
“It was one of those deals where I thought I was clear, obviously, and wasn’t and ruined his day and certainly