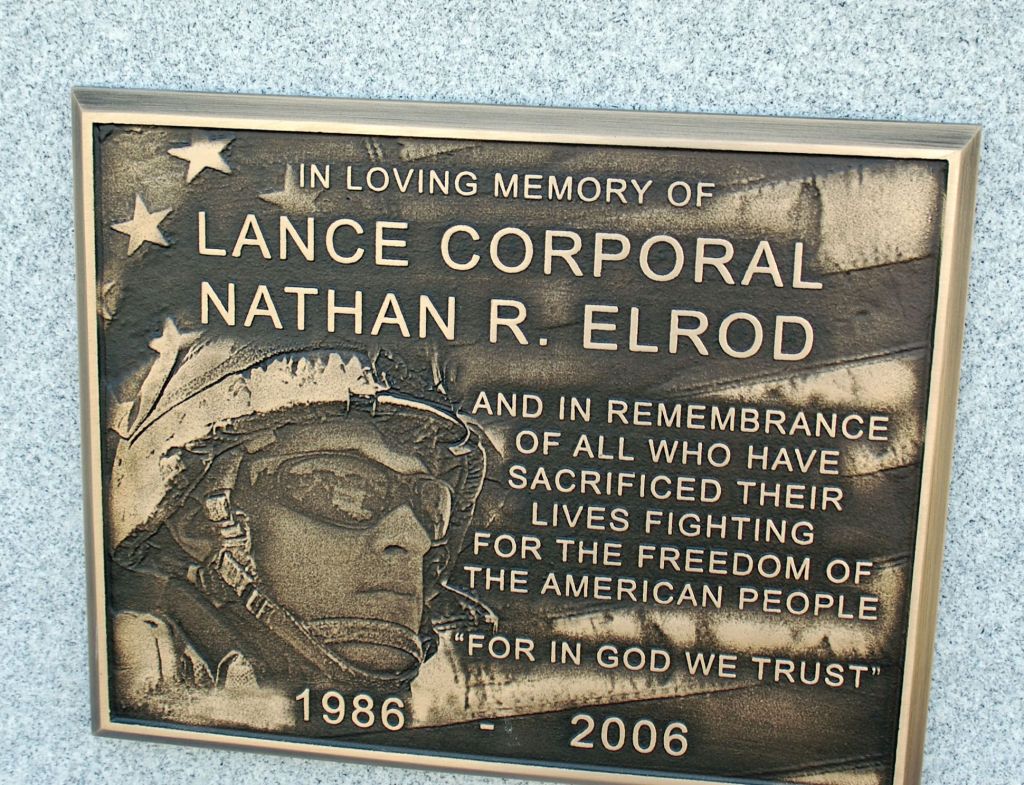 ROCKWELL — When Faris Rogers first went to Teresa and Tim Elrod about his idea for an Eagle Scout project to honor their son Nathan, a fallen Marine, Rogers explained he had never known Nathan.
But it was important for the Scout to honor Elrod’s sacrifice for his country.
“God put it in his heart,” Teresa Elrod says. “… I don’t know the right words to tell you, but it meant a whole lot. It meant the world to us.”
A large crowd gathered at Rockwell Park Sunday afternoon for the unveiling and dedication of a Nathan Elrod memorial. Rogers successfully raised $7,200 toward the purchase of the bronze memorial, featuring a helmet, assault rifle and boots on top of a granite base.
Nathan, only 20 when he was killed in Iraq, would want the memorial to honor all the service men and women who have died in wars, his mother said, and indeed, the plaque has words to that effect in saying, “And in remembrance of all who have sacrificed their lives fighting for the freedom of the American people.”
The memorial sits in a landscaped spot at the entrance to Rockwell Park’s parking lot.
For all the future visitors to the park, it will be the first thing they see.
During his second tour of duty in Iraq, Lance Cpl. Nathan Elrod, a Marine gunner, died Oct. 21, 2006, in Iraq when the Humvee he was riding in hit an improvised explosive device.
He was a Rockwell resident and graduate of East Rowan High School, where he had belonged to the Junior ROTC.
Rogers also organized Sunday’s dedication ceremonies, which included a barbecue lunch from Rob Bunton and Larry Gilbert of Darrell’s Bar-B-Q. Rogers said he owed special thanks to the Elrod family for allowing him to pursue the memorial, and he gave extra shout-outs to Matthew Staton at Powles Funeral Home and Terry Beaver of Ace Hardware.
“I’ve been overwhelmed by all the support I’ve received,” Rogers said, but he tried to keep in the background Sunday and allow the focus to be on Nathan Elrod.
Rowan County Sheriff Kevin Auten said the memorial’s dedication should be a joyous day to celebrate Elrod and all service personnel who have made the ultimate commitment to the nation and provided a country worthy of defending.
“We don’t know how blessed we are,” Auten said. “We should never lose sight of that.”
Auten said he looked into the life of Elrod a little bit and learned he loved cars and dreamed some day of possibly being some kind of mechanic.
But he was struck by what Elrod confided to one of his friends before that second tour in Iraq. Elrod said he wasn’t afraid to die, but more afraid of what it would do to his family.
The young man knew where he stood with his family and the Lord, Auten said.
Auten said he also looked closely at the oath of Scouting and the oath sworn to by people in the military. He was struck by the similarities.
The Scouts’ oath talks, for example, of honor, duty, being your best, helping people and being morally straight. The military oath speaks of supporting, defending, truth, faith, obeying and following orders.
“Both of those oaths have ‘God’ in them,” Auten added. “I think that’s important.”
Terry Beaver knew Elrod much of his life. Beaver cut Nathan’s hair as a youngster and watched him play Little League baseball. He had long conversations with Nathan as a child and knew him to be thoughtful, one to choose his words carefully and a kid who always promised Beaver he would see him later — at his place of business or somewhere else.
By the 10th grade, Beaver said, Nathan knew he wanted to be a Marine, and when he returned home on leave after enlisting, he was proud, upright and serious about serving the country.
“I was so proud of him — we all were,” Beaver said.
Beaver will never forget two things related to Nathan.
One involved a patriotic service at church in May of 2006, before he left on his second tour of Iraq.
On cue, as Beaver was standing in front of the church singing “Under God,” Elrod entered from the back in his dress blues, carrying the flag. The congregation seemed to rise as one, and Beaver remembered his eyes meeting Nathan’s for an instant as he walked in.
“There were a whole lot of tears in church that day,” he said.
Then there was the story of Nathan and Teresa having their portraits taken together for a military ball, with Nathan in his dress uniform.
After he saw the proofs of the photographs, Nathan said they would not do, that they would have to be taken over.
He noticed a button on his uniform was upside down.
“And that was unacceptable,” Beaver said.
Scoutmaster Michael Rowell said Rogers, who will be a high school senior next year, proposed his Eagle Scout project about nine months ago and “he did a great job with it.”
Scoutmaster Tom Hill said the Scout leaders immediately thought it was a noble project — one important for the Elrod family and the Rockwell community as a whole.
Rogers said all the funds are in and the bronze memorial is paid in full. Powles Funeral home donated the granite base.