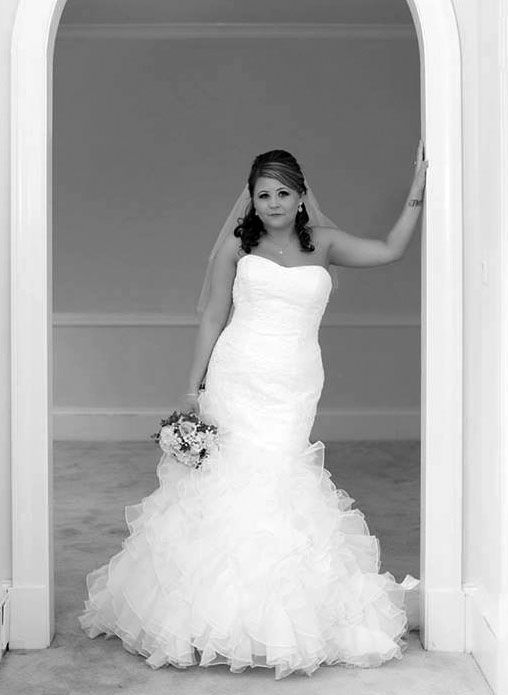 Meagan Ashley Corl and Joseph Alan Threatte were married May 3, 2014, at 6 p.m. at First Baptist Church of Salisbury with Pastor Ron Loflin, uncle of the bride, officiating. A reception was held at F&M Trolley Barn following the ceremony.
The bride is the daughter of Debbie Loflin and Randy and Belinda Corl of Salisbury. She is the granddaughter of Tim Loflin and the late Gisela Loflin of Salisbury and the late H.C. and Opal Corl of Rockwell. Meagan is a 2002 graduate of East Rowan High School and completed studies at Thomas School of Health. She is employed with Quest Diagnostics.
The groom is the son of Joseph and Patricia Threatte of Salisbury. He is the grandson of Flora Lambirth and the late Otis Lambirth of Salisbury and the late Floyd and Estelle Threatte of Salisbury. Joseph is a 2004 graduate of East Rowan High School and 2012 graduate of UNC-Greensboro. He is employed with Verizon Wireless.
Matron of Honor was Ashley Corl, sister-in-law of the bride. Bridesmaids were Amanda Wirz and Erica Nelson, sisters of the bride; Samantha Bost, Amber Peddicord, Bridget Lowry and Nicky Blakeley.
Emery Corl, Lillian Nelson, Bristol and Brooklyn Wirz, nieces of the bride, and Addison Barger, niece of the groom, were flower girls. Evelyn Corl, niece of the bride, was miniature bride.
Best man was the groom’s father. Groomsmen were Matt Corl and Murphy Corl, brother’s of the bride; Nate Richardson, Josh Triplett, Josh Plummer and Brandon Lowry. Brady Bost was miniature groom.
Music was provided by Daisy Bost, pianist and organist; Lauren Thomas, soloist. Greeters included Allie Loflin, cousin of the bride; Brittany Edwards, niece of the groom; and Ashley Earnhardt.
The reception was decorated with a vintage flair using elements from the bride’s grandmothers and great-grandmothers.
The groom’s parents hosted the rehearsal dinner at the Heritage Room.
The couple honeymooned in Punta Cana, Dominican Republic.